Filipinos join gestures of thanks to lifesavers 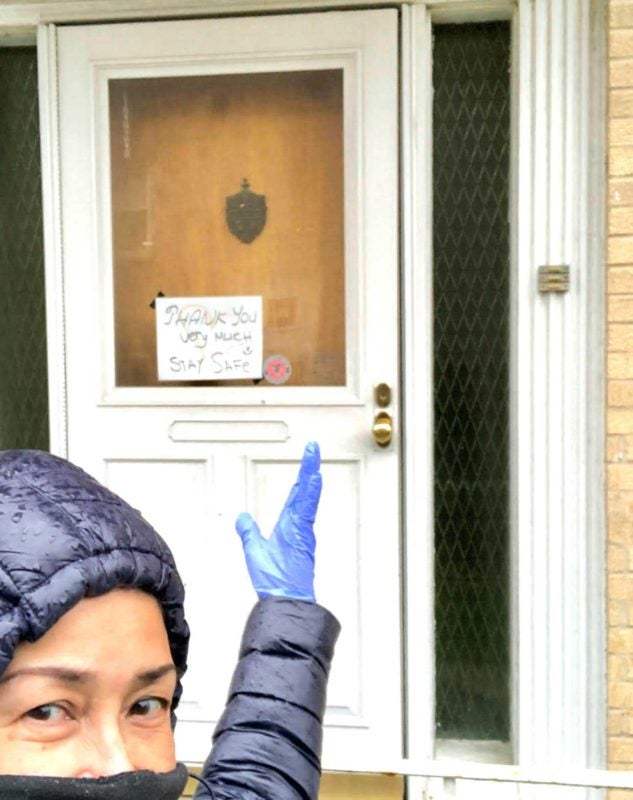 Maria Simon of Skokie, Illinois, appreciates mail and delivery service through the infamous blizzards and gales of her midwestern home region. CONTRIBUTED

“Don’t the protesters realize what sacrifice hospital workers are making to save lives,” asked the Skokie, Illinois, resident, as she shook her head.

On her birthday next month Simon will join the sector health authorities consider “vulnerable,” or people 65 years and older, along with those who have pre-existing medical conditions. Her husband, Bernardo Simon, is an energetic retiree,  who likes visiting antique shops in search of treasures to add to his collection.

Since March, however, the Simons have joined the multitude sheltering in place, mindful of the highly infectious, mysterious and often lethal coronavirus.  Their caution is informed by health care professionals in the family who staff critical care and emergency departments in private and public facilities in the United States and Canada.

“We think of them all the time while they’re out there, exposed to the virus, setting aside concern for their own safety to perform their duty,” said Simon, whose son, Bernard Jr., is not in the health field but is employed at UC San Francisco.  He frequently calls to plead that his parents stay home. He offers to order whatever they need to be delivered at their door. 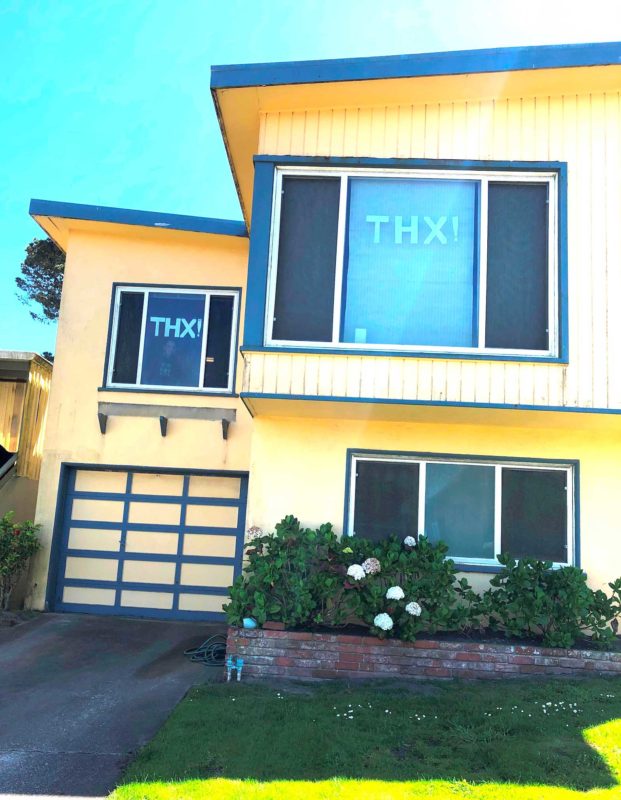 One sister-in-law, who is an intensive care nurse at a Chicago hospital, is mother to a contract firefighter in nearby Norridge. For them and everyone in the service community, the Simons  have a clear message of thanks posted on the door of their home.

“It’s  the least we can do,” Simon said of the handwritten note baring a sentiment that’s far from isolated.

Valentine’s Day is past and Thanksgiving Day is a long way off, but expressions of love and thanks are emerging in unexpected places.

In high-rises in Manhattan and other boroughs of New York, residents bang pots and pans at 7 p.m. to thank front-liners.   Former New York Senator Hillary Clinton posted a snapshot of a heart carved in a field at Central Park, primary refuge of residents of the U.S. city hardest hit by the pandemic.

Last month, the Philippine Consulate in San Francisco hoisted a “parol” on every window of the facade of its offices on 447 Sutter Street.

“We hope to spread some cheer amid these very dark times. We hope to remind our front liners, especially our Filipino American front liners that together we can overcome this challenge, and that we are all in God’s care,” Consul General Henry S. Bensurto Jr. explained the off-season display of the emblematic Filipino holiday decor.

Bensurto applauded those attending to the afflicted, calling them “modern-day heroes who risk their own lives to save the lives of others.”  The consulate lights up the “parol,” he said, to hark Filipino “resilience, faith and hope, especially in the face of adversities — values that are ingrained in Philippine culture and psyche.”

Essential workers and their colleagues perform heroic acts not just out of obligation but of dedication, fully aware of the high likelihood of peril:  They’re soldiers minus firearms.  Arriving at their place of work to find words of affirmation makes the job easier, says Nan Santiago, a therapist at Kaiser Permanente in San Francisco, where a loving missive amplifies management’s appreciation for personnel.

“It gives me a warm feeling of being validated and supported during this time,” said the veteran child therapist assigned on-site during the lockdown.

Jenny Lim of Daly City posted her collaborative work with her kids, a profusion of hearts embodying their gratitude. 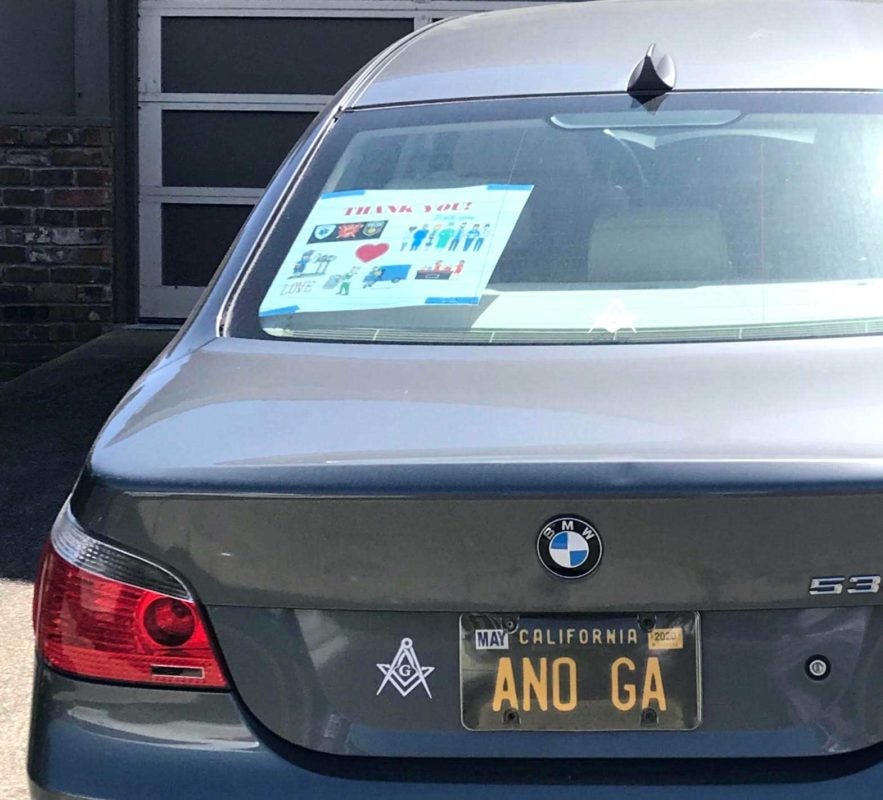 From their South San Francisco home, Nenar and Flor Nicolas send a message to their very own civil workers.  Their car conveys the same along with their pride in their Batangas beginnings.  CONTRIBUTED

The mail carrier at the Westlake Terrace area of the same city broke into a wide smile when he noticed three giant letters with an exclamation point on the window of one of the homes on his route.  To him the intent was obvious.

“You’re very welcome,” the letter delivered yelled appreciatively at the residents waving at him from the window.

South San Francisco residents Nenar and Flor Nicolas have been actively involved in community activities.  Two years ago, Flor deepened her engagement by running successfully for the City Council, becoming the first Fil-Am woman elected in the city.  Her position raises her awareness of the demands on civil workers.

“Thank you for all you do for us every day,” blares a poster from the second floor of their home. The sign features a heart throbbing alongside essential figures: uniformed police officers, masked medical staff, a courier, a waste collector – people required to work away from their homes so others may safely isolate in theirs.

Flor’s car bears pride in her origins with its vanity plates asking “Ano ga?” (as in the colloquial “whaddup”),  a common greeting in the Philippine province of Batangas.  A duplicate of their home tribute to workers beckons from its rear windshield. 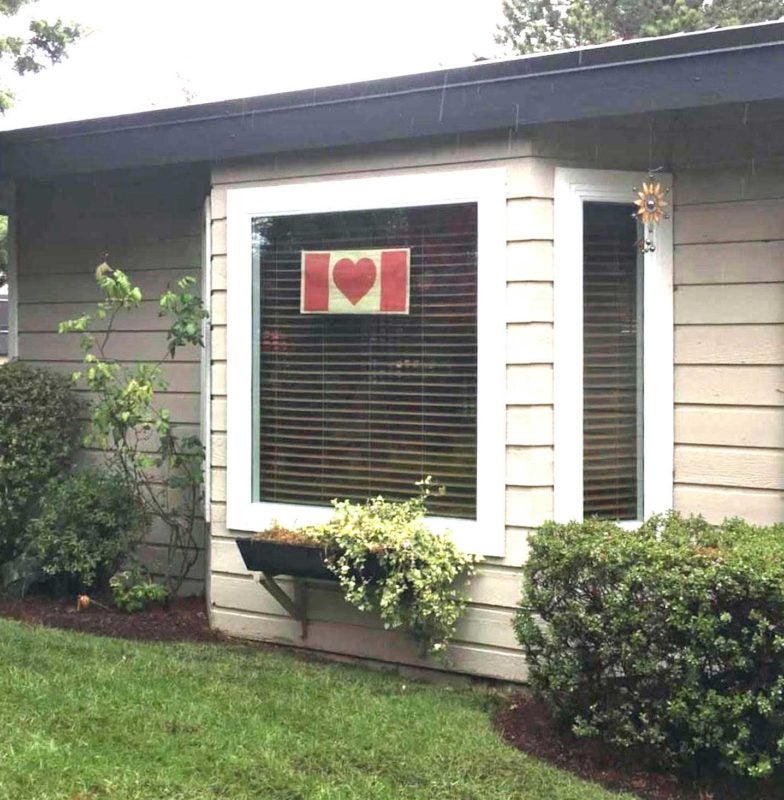 Filipino Canadians Bettina Mapa-Anglin shows support for front-liners including her husband Thad Anglin’s daughter Sharon, a nurse, in their heartfelt rendering of the national flag at their home in Victoria, British Columbia.  CONTRIBUTED

Small deeds inspire big time on both sides of the Pacific.

On their front door in San Juan, Metro Manila, strictly sheltered in place entrepreneurial couple Gobby and Michelle de Leon strung red ribbons signifying support for city workers.  In case passersby don’t understand, they pasted THNX on the wall, in red,  the color of covid-19 awareness in the Philippines, according to the couple.  They suspended their main business fabricating luxury display furnishings to  manufacture acrylic boxes for their son Marty’s nationwide donation of intubation protection for hospital workers.

Long before the shelter-in-place mandate, Thaddeus and Bettina Mapa-Anglin have been comfortably tucked in their gated community on the island city of Victoria, British Columbia.  The rare times they leave are dictated by medical necessity, such as Thad’s physical therapy. 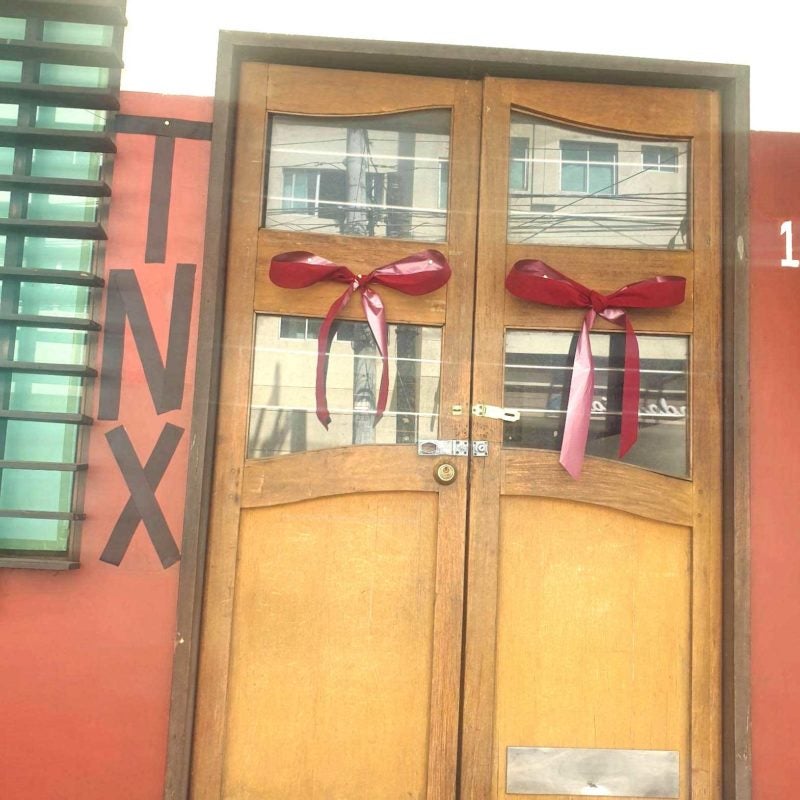 They know to stay put particularly these days when the dreaded virus could easily be borne unknowingly by anyone but has proven often fatal to older folks already coping with health issues.  And yet the Mapa-Anglins, who are in their mid-70s, do not feel alone.

“Our children call regularly from around here or Vancouver, Edmonton and Okinawa,” Mapa-Anglin listed the residences of their blended family.  Thad’s  birthday May 13 coincided with Mother’s Day, making the date doubly special.

From Vancouver, Tina’s daughter Pam ordered an Italian feast delivered to the celebrants.  Thad’s daughter Sharon baked dessert, a  “hummingbird cake” filled with tropical fruit and nuts believed to have originated from her father’s native Jamaica.

Sharon Anglin’s gesture may sound ordinary to those who do not know that she is an ICU nurse.  That she musters energy to express her affection moved her stepmother to return the kindness with a rendition of the Canadian flag fronting their home.  A giant heart replaces the maple leaf, symbolizing the homeowners’ gratitude to a particular family member and their peers who go out of their way to show others they care.