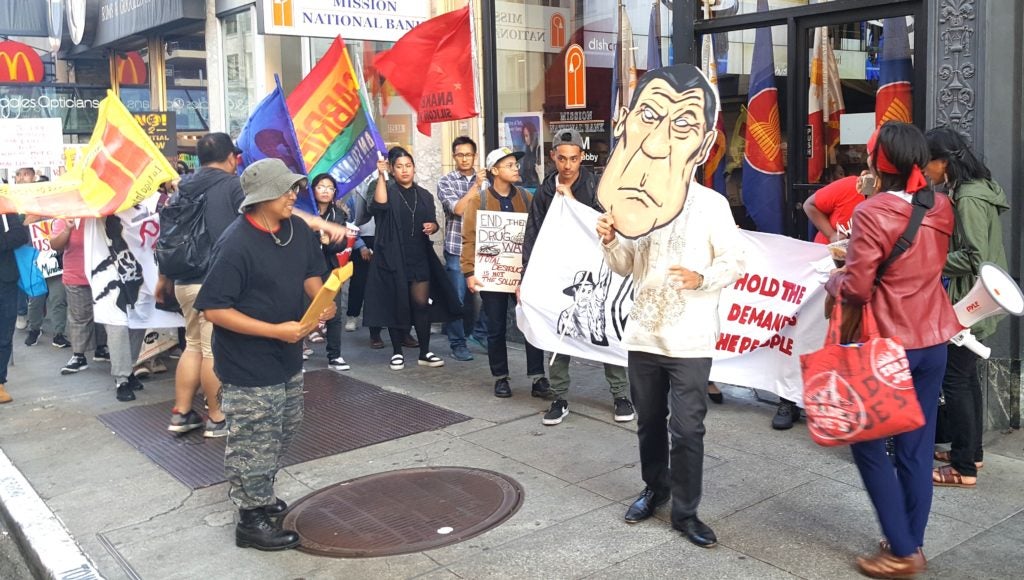 Protesters concluded their own State of the Nation (SONA) by marching and holding a rally in front of the San Francisco Philippine Consulate. INQUIRER/Jun Nucum

SAN FRANCISCO – Members of militant Filipino groups in the San Francisco Bay Area gathered at the Union Square in San Francisco to deliver their own State of the Nation (Philippines) Address (SONA) before marching to the Philippine Consulate where speakers took turns lambasting the government of President Duterte for allegedly failing to deliver promised reforms.

A group of students from San Jose State University (SJSU) and San Francisco State University (SFSU) held up placards denouncing attacks on Lumads (indigenous people) in Mindanao, the continued enforcement of Martial Law in the island where reportedly over 80,000 residents have been displaced and hundreds killed in the fighting between government troops and ISIS adherents. Protesters also condemned the government’s deadly war on drugs where an estimated 8,000 people have become victims of extrajudicial killings. Alexa Zapanta-Anakbayan East Bay spoke on the significance of the rally venue, where a monument memorializes the victory Admiral George Dewey over the Spanish fleet in Manila Bay, which marked the beginning of America’s colonization of the Philippines.

In front of the Philippine Consulate, Bayan USA Secretary General Jessica Antonio said Filipino workers are treated as disposable, despite Duterte’s promises to end contractualization and the poor are being targeted by Duterte’s drug war and scapegoated for the state of the Philippine economy.

“Martial law in Mindanao must be lifted now because militarization has never and will never solve the root problems of unrest in the Philippines. The Philippines must break free from US imperialism as well as China’s incursions on the Philippines, and resume the peace talks with the National Democratic Front (NDF). The Philippine economy must be developed in a way that produces national industry, lasting jobs, agriculture that feeds all of the people, sustainable utilization of natural resources. This will pave the road to a just and lasting peace in the Philippines,” Antonio stated. Anakbayan USA Chairperson Adrian Bonifacio (one of the emcees) believes that President Duterte not only broke most of his promises, but also made situations worse for Filipinos in his first year in office. INQUIRER/Jun Nucum

The sudden appearance of President Duterte at the protest rally outside Congress after his SONA was an unprecedented move by a president, admitted Antonio. “However, his tone was not to listen to what the people had to say in response to his speech, but rather it was so much like scolding children to be patient. He said that it is the people who are his bosses, but the reality shows otherwise. He must take genuine steps towards progress and instead he has shown violence and the status quo,” Antonio lamented.

Nevertheless, Antonio believes that leftists in Duterte’s Cabinet — Agrarian Reform Secretary Rafael Mariano and Social Welfare Secretary Judy Taguiwalo — will continue the fight although they are a minority in a Cabinet of “rightists, landlords, militarists and the like.”

In a separate interview, recent visitor to the Lumads in Mindanao, Robin Navarro of Salupungan (Manobo word for meaning unity or solidarity) International, which supports the Lumad’s wellbeing said that she was heartbroken when she heard that President Duterte threatened to bomb Lumad schools.

“I thought about the children. They already have nothing and you are going to take that away,” Navarro broke down. “They were not asking for that much. They are asking for education, for basic social services, they are asking for shelter. Many of the Lumad, especially when typhoon Pablo happened, lost all of their homes. Education is important and just to know that that is a threat to the Duterte administration. Why?”

“In my interactions with them during my visits in their schools, I never witnessed students being taught to be anti-government, or anything like that. What I saw were students learning how to read and write for many times before they tricked to sell their land because they could not read the documents. Now that they know, they want to hold on to their land,” Navarro added.