SAN FRANCISCO ­– Pinays Rising, an educational scholarship program “open to all self-identified Pinays/x” nationwide returns for another round of $500 scholarships awards to be given out before the fall 2020 semester.

Founded by rapper, producer and spoken word artist Ruby Ibarra and educator Dr. Allyson Tintiangco-Cubales, the scholarship program was “created to promote the continuation of higher education while excelling in the areas of arts (visual, performance/music, conceptual, etc.) and/or community service and activism.”

The two-step application process requires applicants to fill out an online form and submit a minimum one-minute video that tells about the applicant’s academic work, art, and/or activism. Launched in 2018, the Pinay Rising Scholarship program started from Ibarra and Tintiangco-Cubales’ collaboration on Ibarra’s music video for her song “US” in 2017.

The music video features an all-Filipina cast comprised of Ibarra and her music collaborators along with various artists, students and a roomful of people from the community in a collective display of Pinay power.

Ibarra credits Tintiangco-Cubales, whom she considers one of “the pillars of Filipinos in academia,” with the large turnout of community members to be part of the music video. 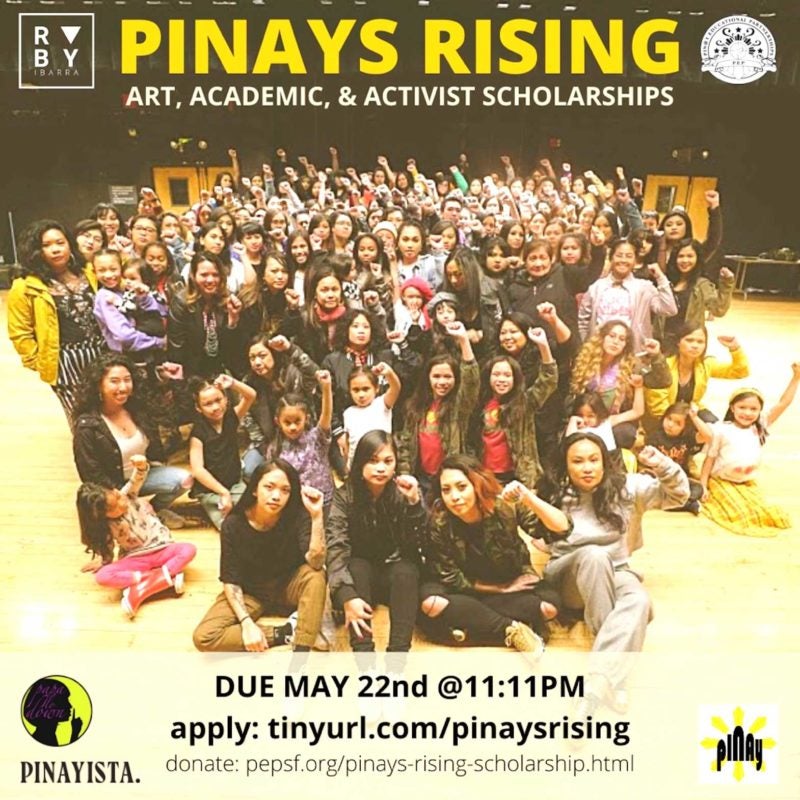 “I would say that 99 percent of them were there because of ate Allyson. She was the one who was able to have such a large call out and the main reason why we had so many Pinays from the community show up to the video shoot.”

Ibarra says that the collaboration and success of the music video, made her realize that she had a platform share stories with her community. “I also recognized that a lot of that was due to the fact that I was allowed to stand on the backs of so many in my community and those that came before me.”

To give back, she came up with idea of tying the platform to education. Ibarra, who also works as a scientist for a biotech company, thought of a scholarship program. With the scholarship, I could also serve as a resource, as a mentor, and as a guide to the same Filipinas that listen to my music.”

Tintiangco-Cubales readily came on board, citing the various facets of Ibarra’s identity and career, being both an artist and a scientist, as the embodiment of the power of Pinays.

“‘This young Pinay is our dream,’” says Tintiangco-Cubales, quoting her colleague and best friend, the late professor and historian, Dr. Dawn Bohulano Mabalon, on the first time she saw and heard Ibarra on stage.

“Ruby represented this really amazing opportunity to think about Pinays having power. It’s really interesting to think about how those things are both parts of her identity. We’re looking for Pinays and Pinx’s who are identified in that way too, who might have multiple things that they’re interested in,”

Other than being an artist and/or a community activist, an applicant must be a self-identified Pinay or Pinx.

“When someone identifies as Pinay, it’s not just, ‘I have Filipina, Filipino parents,’ it’s also this notion that the word Pinay holds a history, that the term Pinay is something that is actually rooted in the American experience, that Pinay is not just an abbreviation of the word Filipina,” says Tintiangco-Cubales.

According to Dr. Dawn Bohulano Mabalon, the word Pinay (the feminine form of Pinoy) originated in the 1920s to refer to Filipinos born or living in the United States.

“It’s this really important term that holds her story, not just a history but a ‘herstory.’”

This identity extends to those who are transgender, and who identify as a woman with a Filipina experience in the United States. “We are very much open to the queer identity when it comes to this particular scholarship,” says Tintiangco-Cubales.

“We wanted to add the X because some people don’t identify with the word Pinay even though they identify with the experience,” says Tintiangco-Cubales. “We we’re really being mindful that this identity is in flux and it’s fluid.”

Along with this identity the scholarship values taking action for one’s self and community.

With the Covid-19 pandemic, it is uncertain as to whether schools will be open or classes will go online in the coming fall semester, but this does not affect the scholarship program and the academic status of the awardees.

“We’re here to support them. And everyone is in need of resources right now. We’re definitely cognizant of that,” says Ibarra.

Most of the funding for the Pinays Rising Scholarship comes from donations from various sources, sponsors and members of the community, including from Ibarra and Tintiangco-Cubales themselves.

All of the donations go to the scholarship. “Every single penny goes directly to the hands of Pinays who gets awarded,” says Tintiangco-Cubales.

The number of awardees for this round will be determined by the amount of donations received for the scholarship. Donations are still accepted at pepsf.org.

For more information and to apply, visit www.pinaysrising.wixsite.com/scholarship