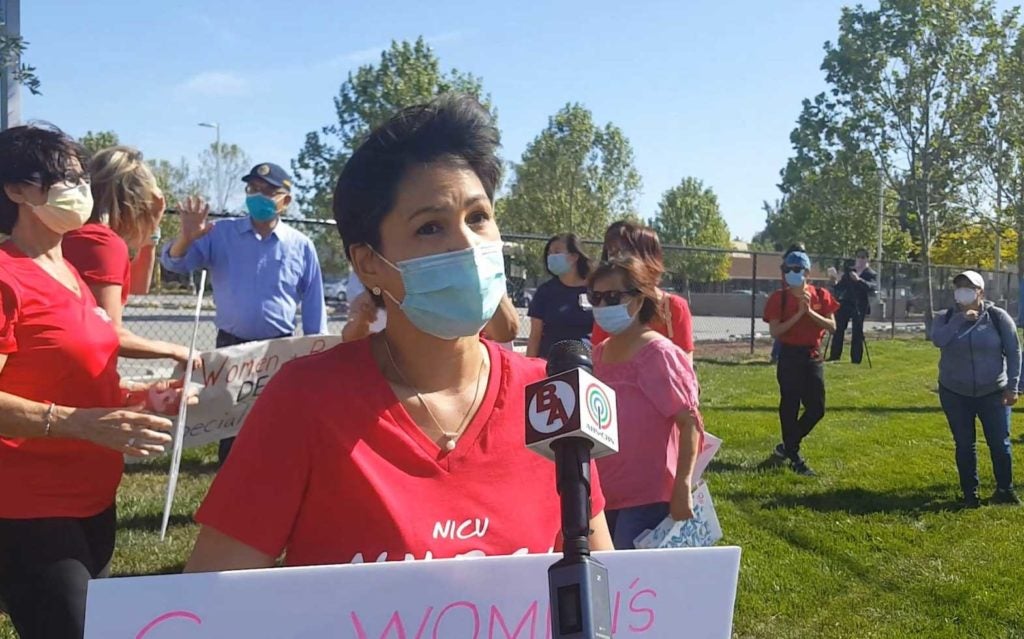 NICU nurse Jocelyn Mallari (center) believes that those who are underprivileged, uninsured should be accorded the same medical treatment as those who are better off. INQUIRER/Jun Nucum

SAN JOSE, California – While health workers all over are being heralded as new heroes during the current pandemic, in San Jose up to 69 staff members of a primary hospital, including several Filipinos, stand to lose their jobs.

Hospital management announced in March that their unit would be closed this June.

Nurses, staff and sympathizers at Women and Children Services (WCS) of the Regional Medical Center of San Jose (RMC SJ) staged another protest at the hospital grounds to against the closure and layoffs in the middle of the pandemic.

Cortese reminded everyone of a moratorium on laying-off employees during the pandemic.

“I already delivered the message to the public health officer in writing to get a legal opinion on the closure. Meanwhile, we are with you in solidarity and the Board of Supervisors is with you. For sure a majority will be with you in your endeavor,” Cortese assured.

Chu cited RMC SJ for taking on the most number of Covid-19 patients in Santa Clara County at 2,255 with 121 deaths.

“This has been the best hospital in 2015 making it a world-class hospital in the east side of San Jose. This would not have been possible if not for the Women and Children Service Unit and for that we have to keep it open. I will work with you to resolve this issue the sooner the better,” Chu pledged.

ICU charge nurse Desiree Lockley RN reported that RMC SJ owner Hospital Corporation of America (HCA) Health chain made $12.9 million in the first quarter of 2020, which is up by 2.7% than last year. 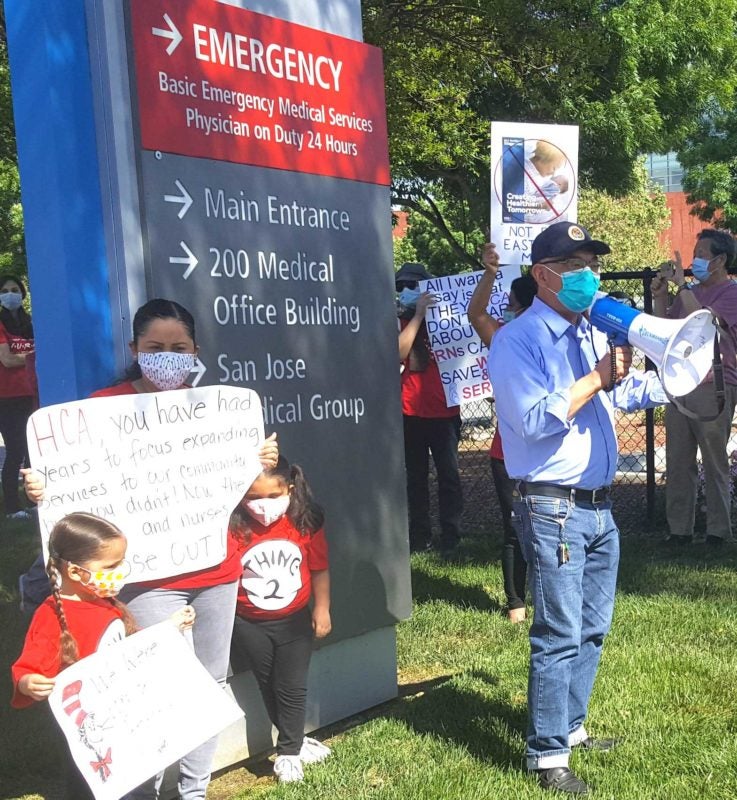 The chain reportedly earned over $43.1 million in the past five years and received an additional $7.5 million from federal stimulus fund. It has over 184 hospitals and approximately 2,000 health sites in 21 U.S. and the United Kingdom.

“They want to dissolve the maternity unit that takes care of the babies? You want to ship the mothers somewhere else for profit? That is not OK,” reiterated Lockley. “To save money, they are using this pandemic to close the maternity unit which is unacceptable. they are taking away care from the socio-economically disadvantaged black and brown people.”

Filipina NICU nurse Jocelyn Mallari said management claims the WCS (including labor and delivery, neonatal intensive and postpartum care) is losing $9-10 million a year, mainly due to a high density of uninsured and underserved patients, some of whom are drug users and most of whom did not have prenatal care. The hospital reportedly plans to send women in labor to other hospitals, or require them to deliver in the Emergency Room. It is estimated that around 15 to 20% of these WCS patients are Filipinos.

“Asking these women to transit to other hospitals places an added avoidable burden on them. Many of these women rely on mass transit and would need to find a way to Los Gatos, a good 15 minute free-flow drive, but potentially 45-minute to an our drive during rush-hour traffic,” Mallari rued. “Delivering in the ER, especially starting in June would also mean delivering alongside Covid patients and other infectious patients.” 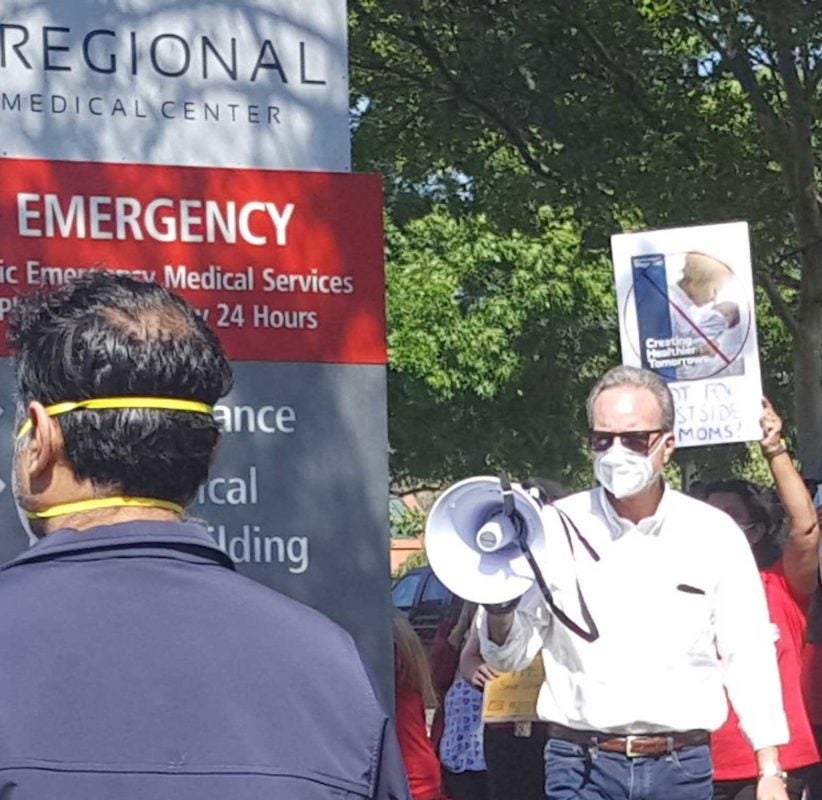 Santa Clara County Supervisor David Cortese (right) reiterates that there is a moratorium on laying-off health care employees during the pandemic. INQUIRER/Jun Nucum

Mallari is hopeful that the presence of California elected politicians in the rally and the current 12,646 of the projected 15,000 signatures gathered through Change.org would prompt HCA Healthcare to reconsider its decision. 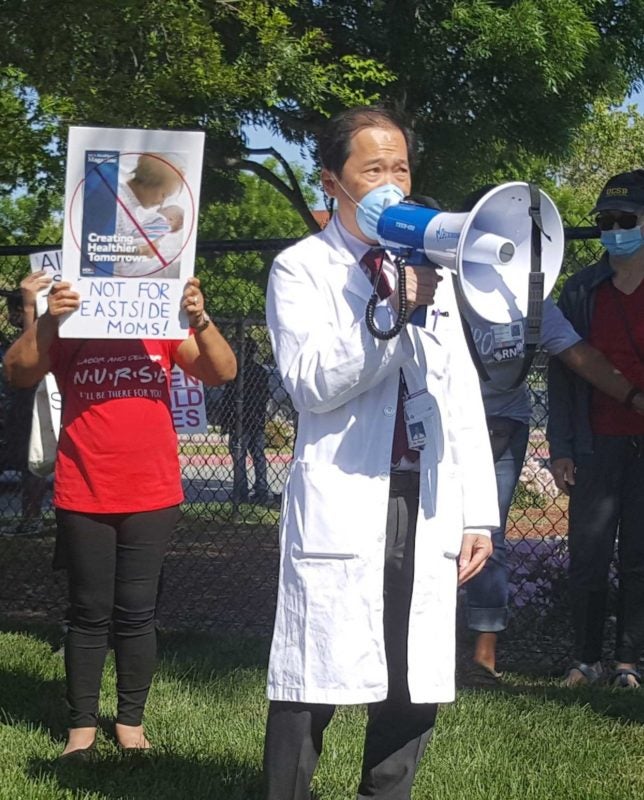 WCS Director Dr. Kenneth Phan (extreme right with mic) rues that his unit faces closure despite an increase in number of patients during his watch. INQUIRER/Jun Nucum

In case these efforts are not enough, Mallari revealed that they would mount a peaceful nationwide boycott of all HCA-affiliated hospitals

Hospital Board Member and WCS Director Dr. Kenneth Phan, OB-GYN expressed sadness that despite the rise in the number of patients under his leadership, RMC SJ still decided to close down his WCS unit.

“Of all the departments, I don’t know why they have chosen this department.  They figured that we will be the quietest to go and we will keep our silence if they close our doors. They guessed wrongly,” Phan believes.