Essential workers and their kids ‘unsafe’ as states reopen

Essential workers and their kids ‘unsafe’ as states reopen 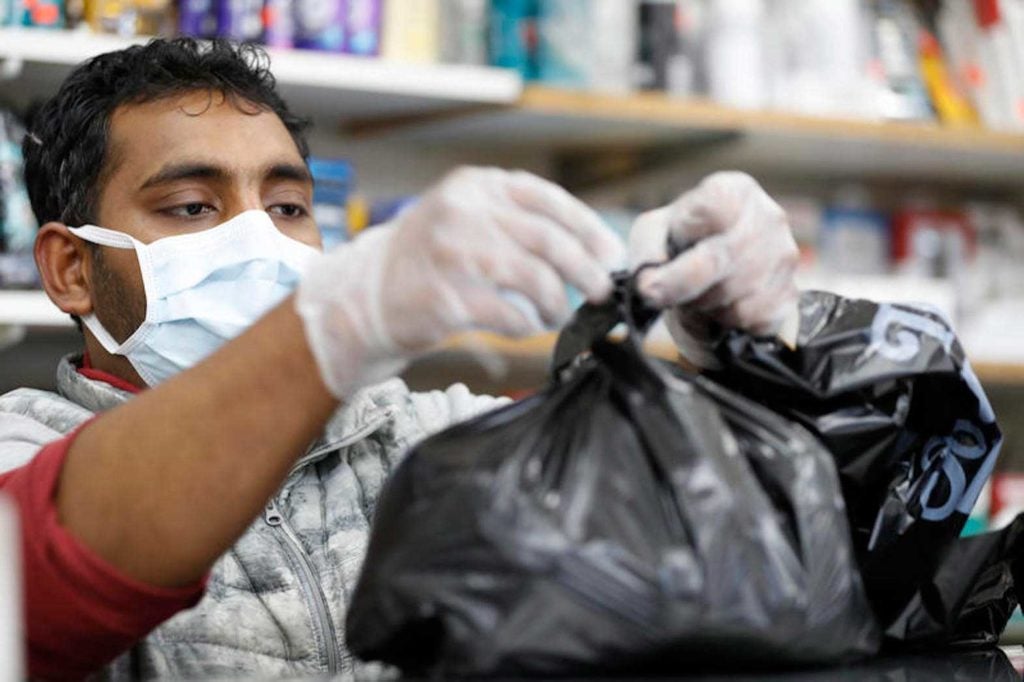 Wearing a mask to protect himself from exposure to coronavirus, Nahid Chowdury prepares a customer’s groceries in plastic bags at the Al-Baraka grocery, last month in Brooklyn, N.Y. (AP Photo/Kathy Willens)

SAN FRANCISCO – As several U.S. states reopen their economies, a panel of health and policy experts caution that certain ethnic groups will continue to be at greater risk for catching and dying from Covid-19.

One-third of all Covid-19 infections worldwide are in the U.S., where more than one million cases have been confirmed, resulting in more than 63,000 deaths.

“To put it into perspective, that’s basically a 9/11 event every three days in terms of the number of deaths,” said Dr. Tung Nguyen, a professor at the Health Division of General Internal Medicine at the  University of San Francisco, speaking on a video conference May 1 hosted by Ethnic Media Services.

Speakers emphasized the greater health risks associated with re-opening for Latino and African-American populations. They singled out workers at meat processing plants – almost all Latinos – which closed due to Covid -19 outbreaks but were ordered reopened by President Donald Trump despite the lack of social distancing protocols.  They also cited the impact of re-opening on children whose parents may have to work while schools remain closed.

At the briefing, Nguyen cited Dr. Anthony Fauci, director of the Ntaional Institute of Allergy and Infectious Diseases, who has warned of a second wave of infections if governors rush to re-open their states without first meeting standard metrics.

Nguyen cited one standard as 7 to 14 consecutive days when the number of new infection cases has not risen within a state. So far, he added, none of the states with the highest number of cases has even had three straight days without a rise. In Georgia, the governor has  aggressively reopened the economy despite a peak in mortality rates May 1, with 1,232 total deaths.

The  infectious disease specialist dismissed the efficacy of hydroxychloroquine, an anti-malaria drug President Trump has touted as a treatment.  “There is clear evidence of harm and no evidence of benefit,” said Nguyen.

But a glimmer of hope lies in the new drug Remdesivir, developed by Gilead, which reduces recovery time from a severe Covid -19 infection by three days and improves mortality rates.  Nguyen said Gilead would have to ramp up production of Remdesivir, but added, “The drug is helping us see a light at the end of the tunnel.”

Melva Thompson-Robinson, Director of the Center for Health Disparities Research at the University of Nevada, Las Vegas, highlighted the impact of the pandemic on African Americans, who suffer death from Covid -19 infections in disproportionately high rates. Several factors contribute to the population’s greater vulnerability, including implicit bias within the health care community which contributes to poorer quality of care experienced by African Americans.

“Stories are coming out where African-Americans are presenting themselves to emergency rooms with Covid -19 symptoms but are not being seen,”  Thompson-Robinson said.  “In some cases, it’s taking multiple trips for that person to finally be seen…or be tested, and by the time it’s confirmed that they do have Covid, they are so sick, they can’t recover.”

David Hayes-Bautista, director of the Center for the Study of Latino Health and Culture at UCLA, pointed out that Latinos are twice as likely as the population at large to lack health insurance coverage. But they are on the front lines of serving the population sheltering in place, from producing and delivering food to working in nursing homes, working as auto mechanics, and driving buses, among other occupations, often without protective equipment.

Hayes-Bautista also highlighted the findings of the Center’s new study which identifies the metric for evaluating the spread of the virus to determine whether states should re-open. Rather than looking only at the number of new cases, the Center ranks states by the number of infections per one million residents. By this metric, New York and New Jersey are in the top tier,with 15, 132 per million and 12, 907 per million respectively.   Two states where protesters are pushing aggressively to reopen – Louisiana and Michigan – rank sixth and ninth on the Center’s list, with 5,917 per million and 3,975 per million respectively.  California ranks 35th, with 1,195 infections per million.  (https://bit.ly/2Sx6HvC)

Mayra Alvarez, president of the Children’s Partnership, a national research and policy advocacy group based in Los Angeles, relayed “disheartening findings” of a new survey of 600 parents of very young children in California. The survey, by Global Strategies Group in partnership with EdTrust and the Children’s Partnership, found that more than half of parents of young children are not confident about being able to pay for basic needs like food, housing and health care.  (https://bit.ly/2Widzhu)

“One in three are skipping or reducing meals so that their kids don’t go hungry – a number which increases significantly among new parents with a child one to six months old,” Alvarez said.

Many children will now face continuing to learn at home while their parents return to work, and they will be without adequate resource such as laptops and internet connectivity.