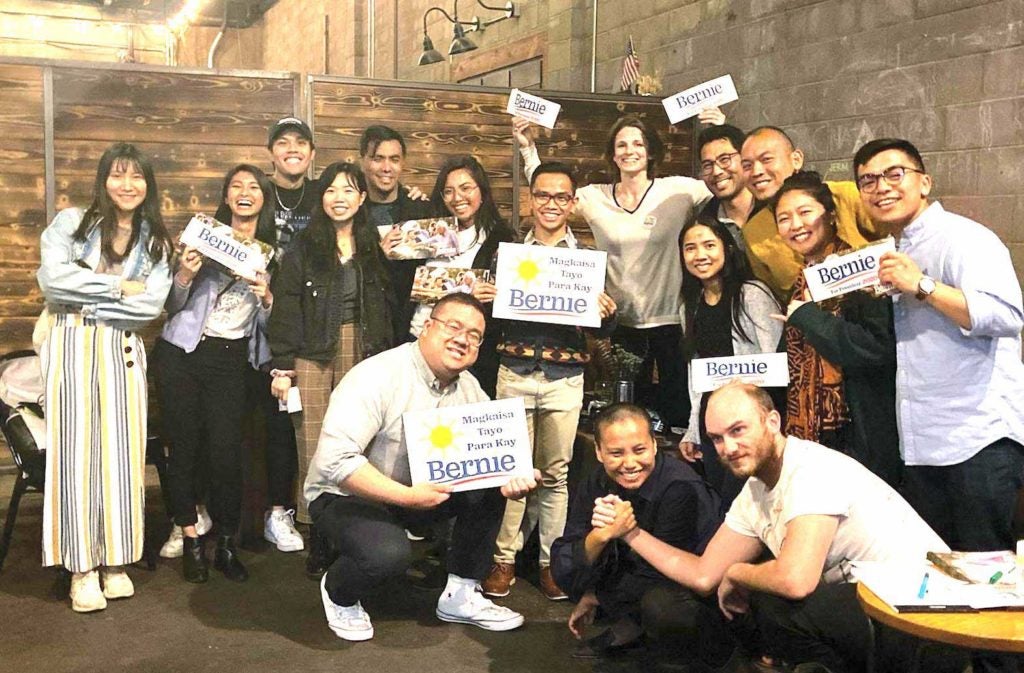 Adrien Salazar (center) is joined by fellow supporters during a #FilipinosforBernie grassroots event in Los Angeles ahead of Super Tuesday last March. CONTRIBUTED

LOS ANGELES — Adrien Salazar knocked on hundreds of doors ahead of the New Hampshire primary and organized #FilipinosforBernie gatherings in Oakland and Los Angeles leading up to Super Tuesday this past March.

Salazar was one of the thousands of Filipino Americans across the country who rallied behind Vermont Senator Bernie Sanders, actively shared his platform on social media and volunteered for the campaign.

The senator’s progressive proposals of Medicare For All, free public college, student debt cancellation, and raising the minimum wage resonated with them, as noted by Fil-Am supporters — including elected officials — the Asian Journal has interviewed through the primary cycle. The slogan “Not Me, Us,” as well as campaign signs and materials in Tagalog, made them feel seen and heard.

“He made it from the very beginning that a vision for transforming America is what he was about. I was really excited about that. He was a candidate that could potentially do it and get to the root of these problems so that’s why I volunteered for the campaign,” said Salazar, a climate justice advocate based in New York.

Jollene Levid, a union organizer for United Teacher Los Angeles, was a Sanders supporter in 2016 and jumped on board from the get-go when he announced his 2020 bid. She spent several days in Las Vegas precinct walking and volunteering during the Nevada caucuses last February.

Like Salazar and Levid, #FilipinosforBernie believed in the “political revolution” and did their part in hopes of propelling Sanders to the White House this time around come November. 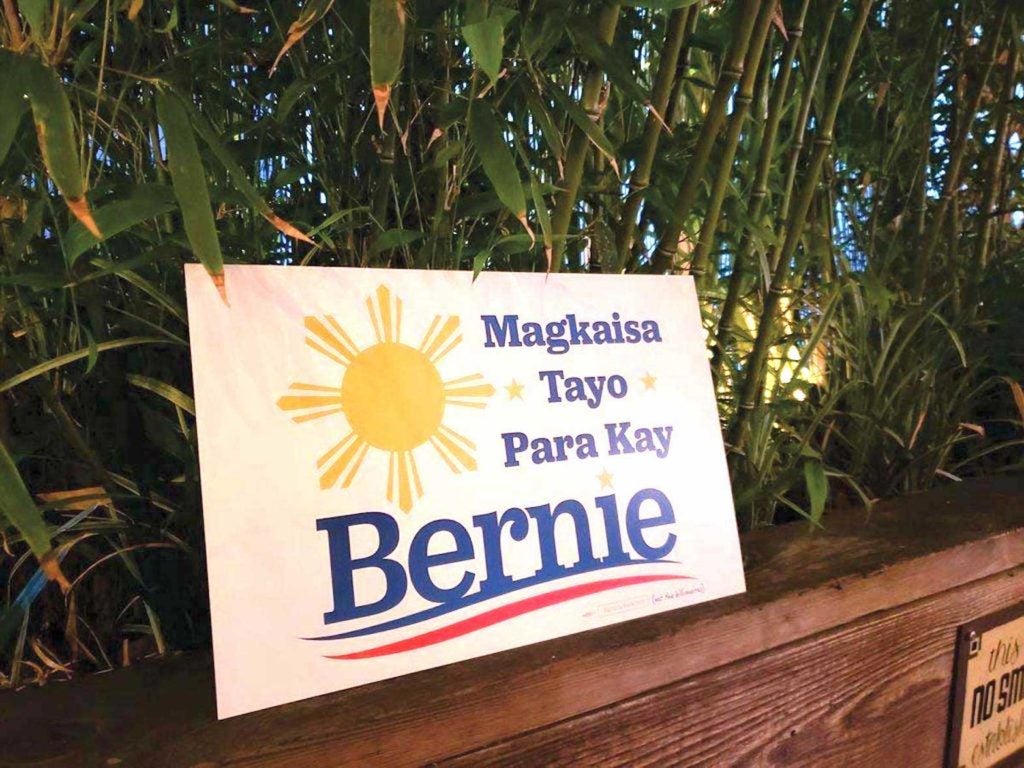 The campaign of Vermont Senator Bernie Sanders had signs in various languages, including one in Tagalog, which said “Magkaisa Tayo Para Kay Bernie (Let’s Unite for Bernie).” ADRIEN SALAZAR

That was until Wednesday, April 8 when the senator announced that he would be suspending his presidential campaign, just shy of four months before the Democratic National Convention in August.

“My reaction to Bernie suspending his campaign was sadness. Bernie was the last presidential candidate of any party that was pushing for real relief (money) for people today, health care for all, immigrant justice, [and] canceling student debt,” Levid said.

“We are in crisis and the one candidate that reflected and fought for our needs ended his bid. It matters what arenas of power our needs are being echoed in.”

Sanders — whose early momentum appeared to put him on track to secure the party’s nomination — acknowledged in his remarks that he trails behind former Vice President Joe Biden by some 300 delegates and that the “path toward victory is virtually impossible.”

For Michael Milan, a regional director for the California Democratic Party based in the Coachella Valley, the progressive lawmaker seemed “the most aligned to the priorities of Filipino Americans in 2020.”

“This movement was not about Senator Sanders. It was about all of us moving the progressive needle left. I do personally believe that [he] was entirely a viable candidate, especially in light of how well he performed in very large states with considerable Filipino American populations like Nevada and California, and that his campaign could be taken seriously. With the political climate today, he could have made a run for the presidency and won,” Milan said.

Despite triumphing in major states like Nevada, California, Utah and Colorado and grabbing a significant share of the delegate pool, the senator’s news came as the coronavirus pandemic has pushed back upcoming primaries contests and continues to upend the daily lives of Americans.

“I could not in good conscience continue to mount a campaign that cannot not win and which would interfere with the important work required by all of us in this difficult hour,” Sanders added.

Stephanie Quilao, a 2016 California delegate for Sanders who runs the Twitter account @Bern_Identity with over 36,000 followers, wrote a thread about why the senator garnered support from voters like her across the country.

“Berners, I know a lot of you look to me for comfort with pep talks but [to be honest] today I don’t have it,” she wrote on Wednesday.” But what I do have is acknowledgment — a recognition that you’re feeling a spectrum of emotion right now from sadness and heartbreak to rage and even apathy.”

Quilao continued, “For many, Bernie was the first politician in our life where we not just got politically involved, we got emotionally involved. It was the first time we put our heart + soul into a campaign that was beyond the candidate and about a cause for the higher good of ALL.”

Sanders’ exit now leaves Biden as the presumptive Democratic nominee, whom the senator regarded as “a very decent man who I will work with to move our progressive ideas forward.”

With Sanders remaining on the ballot in forthcoming primary contests, including New York, many supporters plan to still vote for him to get more delegates ahead of the party convention. This will give the ability to “exert significant influence over the party platform and other functions,” the senator said.

Christine Reinheimer, a Fil-Am, supporter from Missouri, said that the senator’s exit felt like a loss but her “admiration for him continues.” She said she will vote blue in November nevertheless for the bigger goal of defeating President Donald Trump.

“I am still planning on voting against Trump, but it feels like choosing the lesser evil. The future still seems bleak either way and I hope we can find more stability someday where we actually want the best for each other without animosity,” Reinheimer said.

Salazar said he will join fellow supporters in calling on Biden to appeal to more progressive voters and bring in the issues that drew them to Sanders’ campaign in the first place.

It’s a start from Biden as he announced proposals on Thursday to lower Medicare eligibility to age 60 and forgive student debt for low-income and middle-class families.

“There is a lot of momentum from organizations and individuals who supported Bernie to call on Joe Biden to take on the strong progressive policies that Bernie was advocating for,” Salazar said. “I think Joe Biden is going to need the progressive base to win in November…because if he doesn’t do that, he’s not going to win.”

In addition to the progressive values, Milan said the vice president’s campaign should recognize the strength of the Fil-Am electorate and include what is most pressing for them.

“It is important that Biden is open to including the Filipino American voice in the greater conversation. He’s got to make sure that our perspective is considered in the platform if he wants to capture our votes and support,” Milan said.

But for some supporters like Levid, they recognize that they can’t rely solely on the country’s top seat for these changes.

“Bernie suspended his campaign mere days ago and so much organizing for the issues he stands for continues…The organizing has not and will not stop,” Levid said.

“Our needs won’t be fulfilled in the presidential arena. It was never ours to begin with. We will continue to carve out our own.”