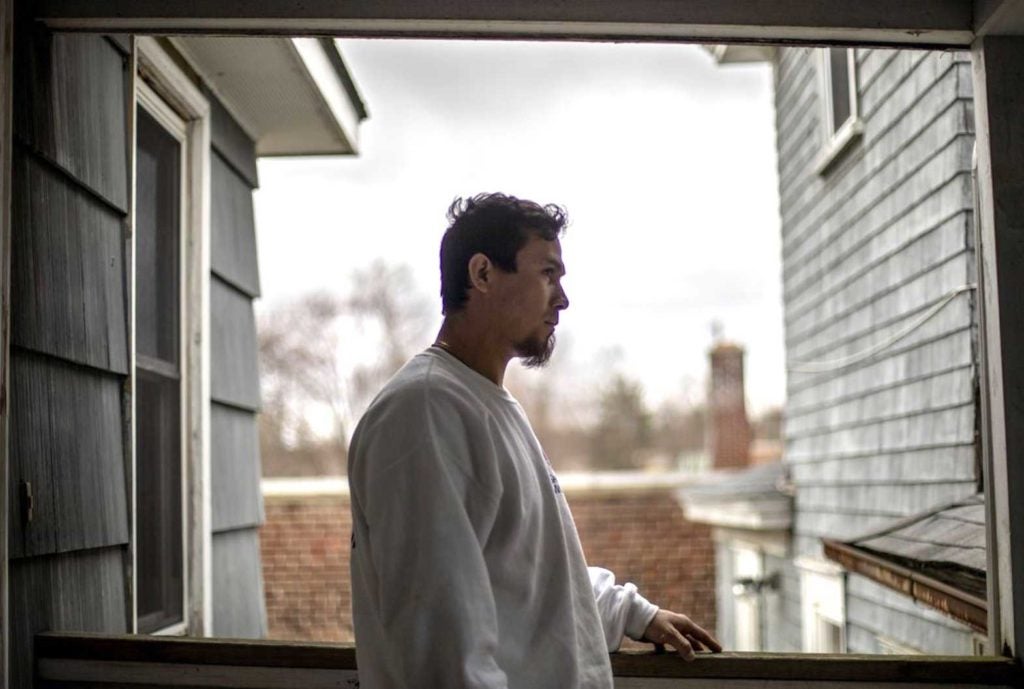 House painter Jose Martinez stands on his front porch in Greenfield, Massachusetts. Martinez said a pandemic stimulus check could have helped cover at least a month’s worth of expenses, if he had qualified. The 34-year-old Mexican crossed the border illegally about 15 years ago and lives near the Vermont state line with his 4-year-old American-born daughter. (AP Photo/David Goldman)

PHOENIX, Arizona — The $2.2 trillion package that Congress approved to offer financial help during the coronavirus pandemic has one major exclusion: millions of immigrants who do not have legal status in the U.S. but work here and pay taxes.

That includes Carmen Contreras Lopez, a 48-year-old housekeeper who, though she earns low wages, files a tax return each year. Since the virus took hold, she has lost most of her clients and is getting by with help from her oldest son. But she won’t see a penny of the money promised to most Americans in response to the pandemic.

“It’s hard because to the government, we don’t exist,” said Contreras Lopez, who has lived in the U.S. for 30 years and has four grown children who are U.S. citizens.

The government expects to begin making payments to millions of Americans in mid-April. Anyone earning up to $75,000 in adjusted gross income and who has a Social Security number will receive $1,200. The payment steadily declines for those who make more. Legal permanent residents, or green card holders, are expected to benefit.

Roughly 4.3 million mostly unauthorized immigrants who do not have a Social Security number file taxes using what’s known as a taxpayer identification number, according to the Institute on Taxation and Economic Policy.

Many say they pay federal taxes because they hope it will one day help them achieve legal residency and because they feel it’s the right thing to do.

“We made that decision because we’re living in a country that’s welcomed us with a lot of love,” said Ingrid Vaca, a house cleaner in the Washington, D.C., area.

Vaca said immigrants take care of communities, children, the elderly and homes, but they will not receive any help themselves. Also left out are the workers’ 3.5 million children, many of whom are American citizens.

“This is a nightmare to me and many of my colleagues,” Vaca said, lamenting the lack of income for rent and basic necessities. “We need for us to be respected.”

Asked how immigrants without legal status will survive the pandemic’s economic toll without any aid, President Donald Trump acknowledged the difficulty but said many citizens without work need help first.

“It’s a really sad situation, and we are working on it. I will tell you I’m not going to give you a hard and fast answer because I just want to tell you it’s something I think about,” Trump said.

Democratic lawmakers introduced legislation last week in the House and Senate that would allow immigrants to access relief funds.

“COVID-19 does not care about your immigration status, so neither should our response,” U.S. Rep. Raúl M. Grijalva, an Arizona Democrat, said in a statement.

Maria Zamorano, a day laborer in the Los Angeles area, has also been left without work. Until recently, she worked seven days a week cleaning houses, earning roughly $700 weekly. But all of her employers canceled services. After she did an interview with The New York Times about her situation, two of those employers decided to keep paying her, she said, but she doesn’t know for how long. She’s still short on cash for food, rent and bills.

“Like thousands of others who don’t have legal status, we are left empty-handed in this crisis,” Zamorano said. “I pay taxes, but the government doesn’t consider that we should get help.”

In rural Massachusetts, Jose Martinez said a pandemic stimulus check could have helped cover at least a month’s worth of expenses, if he had qualified. The 34-year-old Mexican crossed the border illegally about 15 years ago and lives near the Vermont state line with his 4-year-old American-born daughter.

Martinez, a house painter, says work has dropped off during the pandemic. His boss still owes him more than $500 for recent jobs, and the restaurant where he washes dishes part-time has also been temporarily shuttered.

“The check would have given me the opportunity to stay at home, avoid sickness and keep my family safe,” Martinez said, referring to the stimulus money. “But I have to keep looking for work and exposing us to risk. I don’t know what else to do.”

Luis Jiménez, a 35-year-old Mexican who takes cares of calves in New York, near Canada, said he feels forgotten by the government even though his work is vital to feed Americans.

“We are essential to the economy and to feed this country, but we don’t get any help or support,” said the father of three, who has lived in the United States without legal status for 16 years.

“Every day we go to work and we are exposed to everything. In the farm, there are hardly any protection measures” against coronavirus, he said.