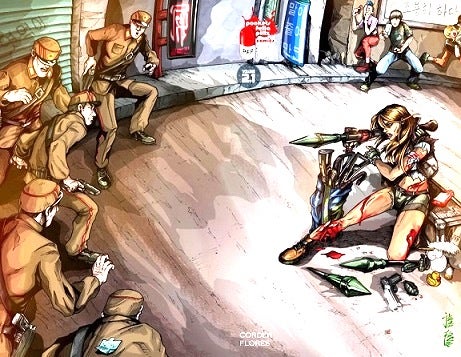 One of the characters in the “Rocketgirl” series is Rashida Johnson, a Filipina American who works as a neurologist for the CIA in Washington, DC. CONTRIBUTED

NEW YORK — A comic book series featuring a Filipina American character is something we surely don’t hear of every day, but that is precisely what readers will encounter upon opening pages of a comic book series called “Rocketgirl.”

This series is the brainchild of Manila-based American artist Fred Corder, a proud native of Washington, DC.

While on the surface Rocketgirl seems like your typical superhero, it is actually starkly different from mainstream DC and Marvel comic characters like Batman, Captain America and Wonder Woman.

The Rocketgirl series has no central character or main protagonist. It revolves around the actions and consequences of different characters, the most influential being Rashida Johnson, a Filipina born in Luzon, who is adopted by African American physicians with Doctors Without Borders who are conducting a mission in the Philippines.

Rashida is orphaned by violence and grows up in Washington, DC. where she follows her parents’ career footsteps to become a neurologist for the Central Intelligence Agency (CIA). She develops a cognitive enhancement medicine for the US military, until her boss starts to purify it, leading to the discovery of Hell. Then things go wrong in some really interesting ways, to put it mildly.

Not the usual comic heroine

Fred said Rashida has no superpowers in the classical sense.

“She just can’t die properly,” he explained. “Each time she dies, she comes back 15 minutes before it happened. That’s just the beginning of the oddity of her predicament. It really plays with the question of morality and causality. Her character’s journey asks the central question: Do you define your actions? Or do your actions define you?” 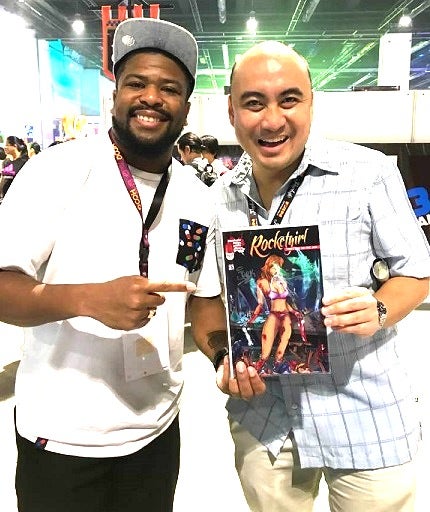 The author (right) meets Fred Corder at Toy Con 2017 at the SMX Convention Center in Pasay City. “Fred is full-blooded African American, but he’s Filipino in heart and soul!” CONTRIBUTED

If there is one conventional power that Rashida possesses, it’s that of her extreme anger/hot-headedness, hence her code name “Rocketgirl.”

I had the wonderful opportunity to meet Fred at the recent Toy Con 2017 held at the SMX Convention Center in Pasay City, Philippines. Affectionately nicknamed “That Guy,” Fred is the founder, CEO and creative director of the art design company Pockets Fulla Pilz (PFP), which publishes “Rocketgirl,” an original comic series created by Fred and illustrated by his Filipino artist-friend and business partner Jeck “Jerk” Flores.

As elaborated by Fred, Rocketgirl is different from other superheroines because her only true villain is herself.

“She is fighting the enslavement imposed by her own dark emotions and pride,” he said, “and that makes her relatable and interesting for fans.”

Fred had jumpstarted PFP in 2009 with his cousin back in Maryland. As they were both completing their master’s degree at the time, his cousin eventually quit on him. On the suggestion of friends, he hired Filipino artists who are “less expensive and way better.”

“Before I knew it, my hobby had blossomed to a fully functional art collective and creative studio,” he recaled.

By 2011, Fred and his PFP co-workers had expanded their networking throughout the artist community to the point that they soon found themselves doing promo work for popular hip-hop musicians Waka Flocka Flame and Drake, both of whom he had met.

It was that same networking that would eventually compel Fred to make his move to the Philippines to further expand his business and social enterprise. In 2012, Fred left his job as a psychologist in DC and made his move to Manila official.

“It took me by surprise honestly; the graphic artists of the Manila area are the best in the world,” he beamed. “I immersed myself and intentionally got lost in the colorful world that is the Manila art underground scene.” 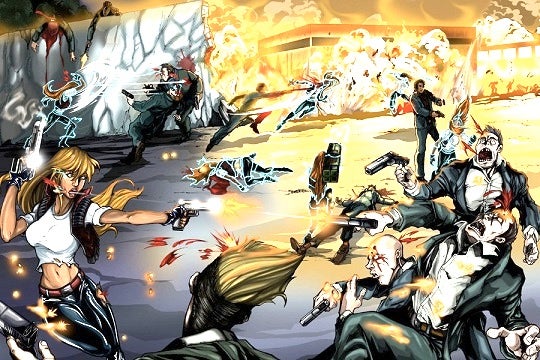 As the creative director of PFP, Fred’s work entails writing the story and dialogue of his comic series; then he relays it to his reliable team of artists while actively scouting for new artists within the Metro Manila area to join his team.

As the CEO, he secures funding for his company and strategizes which comic cons they will participate in as exhibitors and which stores they will be partnering with.

To aspiring comic artists, he only had to say: “Create! Create! If you are an artist, you must draw nonstop. If you are a writer, you have to write nonstop. Also, don’t copy, consume as much art as you can and make sure you can’t find anyone doing art that looks or sounds anything like yours. Even if your art or writing sucks, as long as it’s original and there is a scary amount of it everywhere you will succeed eventually.”

He further advised, “Get a social media account and post it all. At first give it all away for free. If you are really creating nonstop you are not worried about people stealing what you have too much of. Then once you get a following, monetize it slowly but steadily.”

For those interested to personally meet Fred and hear even more handy tips from him, here are some events where you can him: Asia Pop Con in Manila August 25-27, 2017, and Baltimore Comic Con in Maryland September 22-24, 2017. Fred also hopes to participate in this year’s New York Comic Con should things properly fall into play.