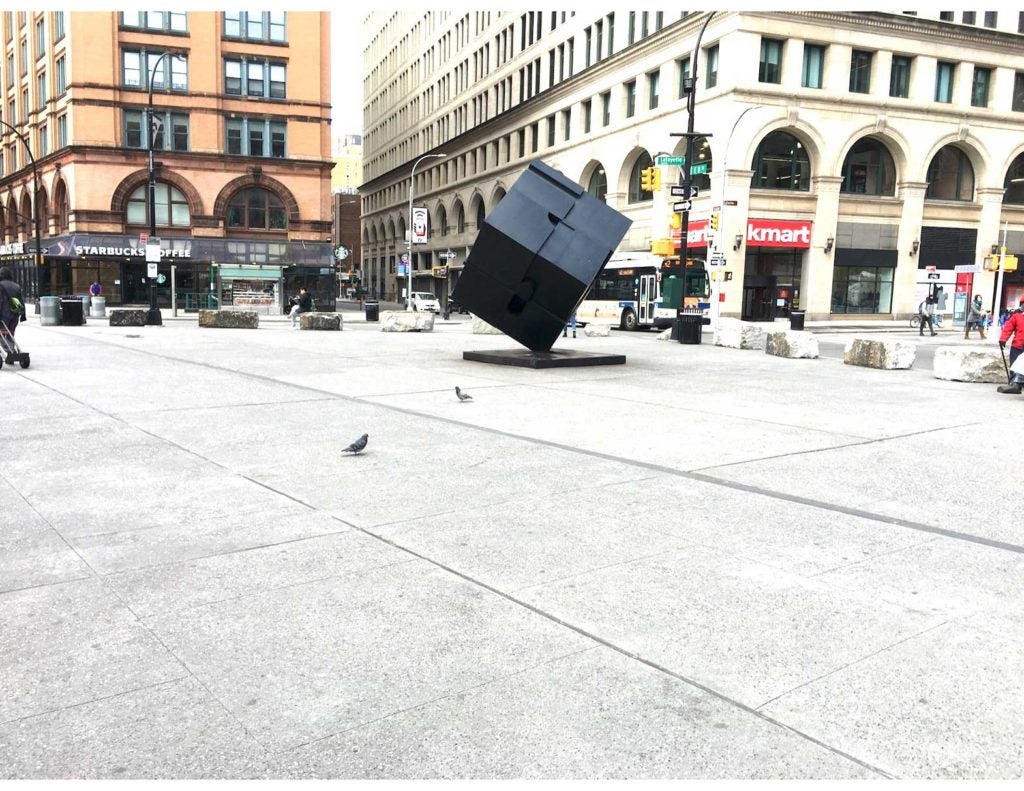 Astor Place in the East Village, with its well-known landmark, the moveable black cube, usually bustles with students, office workers, and NYU students, walking or sitting at tables, now deserted, the tables and chairs put away. CONTRIBUTED

NEW YORK—My wife, Midori, and I now teach online, our students reduced to thumbnail videos, us too, of course. Zoom has become the preferred method of online communication, not just for classes but for almost any other social gathering. It’s as though we are all whirling in space, encapsulated, our abodes fortified as much as possible against outer space.

We are thankful that our rear windows look out onto the co-op’s backyard and a community garden that used to be, so we’re told, a family plot. (Hmm, I just noticed my referencing two Hitchcock films.) The bare branches of the trees seem like a network of nerves against a grey sky, of T.S. Eliot’s “patient etherized upon a table.” For our resident squirrels, these branches serve as their highways, and even trampolines, as they effortlessly leap from branch to branch. Very soon these trees will be green, harbingers of hope.

In the hallways our appetites are whetted by the delicious aromas of meals being cooked. We have seen more of our neighbors in the past two weeks than we have in quite a while. We talk (usually at a distance now), and on our co-op electronic bulletin board useful tips are shared, help proffered.

Midori and I make sure we go out at least once daily, using the nearby school playground, empty of kids but kept open for the community, for some light jogging. Afterwards, we head over to Espresso 77, a local café that has benches outside where we can sit and drink our cappuccinos. The pleasure to be had in such a simple quotidian ritual is inestimable!

People seem friendlier, in a city where smiles are at a premium. Here in a corner of Jackson Heights, for now the center holds.

I asked a few friends living in various parts of the globe if they could send me mini-essays about what life is like where they are. Here are what they sent in:

I live in a rural, mountain area in California. Living with wildfires and earthquakes actually prepared us. We had stocks of food and N5 masks at the ready. We’ve already shipped spare masks to friends in New York once their stores ran out of stock. This doesn’t mean we didn’t go prepper-shopping when we were able, but we’re the only ones I know who stocked up on vacuum bags, which is to say, I believe this issue is not a matter of weeks but months and I’m looking over effects of supply disruptions medium-term, not just the short term. As well, for years I worked at home, which means I’ve practiced social distancing for years so that’s not an issue for me.

What is an issue is the effect of this crisis on hourly workers with minimal health care coverage of which many work in the agricultural fields surrounding us in wine country. We’re also concerned about our elderly neighbors. One of my friends helps them out and I made sure she had masks as she would be in contact with senior citizens. Crises test character and I hope we all show our best sides. Last but not least, as a poet I’ve received several solicitations for poems related to Covid-19 which I’ve rejected; I have zero interest in making this virus my Muse.

My name is Eru Gibson, I am an actor based in Los Angeles. We are in quarantine at least until April 19th, which means if we party or make film, we will be punished legally. On March 14th, I waited for an hour to get into a super market even before the opening. At 8am, bread, rice, toilet paper, these things were already sold out. I have been trying to order delivery, but obviously there are not enough cars and staffs to deliver. All filming is cancelled and so many people have lost their jobs. I do live streaming to connect with other countries, sharing information and cheering them up.

“It’s very wrong, Mummy, that you don’t let me go out and play,” the three-something-year-old boy was crying to the point of choking himself.

“But there’s virus out there!”

“I DON’T SEE HIM,” the boy looked out of the window and sniffled, “I can’t wait to play with him.”

“Hahahahaha …” one of us in the same Wechat group wrote.

That was one of the video clips that saddened and entertained millions of Chinese families who had to stay home to prevent coronavirus from spreading, following the lockdown on Jan. 23, 2020 of Wuhan City that had been hit the hardest.

It’s been a strange period. Word games were played, new food was made and recipes shared, home-made shows went around as if there were a competition. I renewed a friendship that went dormant for over 30 years after sharing anxiety of not being able to work with a long-lost friend. My husband finally learned to cook. I built a bond with an unlikely friend from Wuhan after I sent a message to inquire after him.

So much was lost; so much was gained. Life is fragile and strong all at the same time.

I’m one of the privileged few for whom the lockdown has only meant a reduction of scenery. This past week, I’ve been working from home. I often think about the laborers who’ve been sidelined by the government, yet I still find myself fixating, selfishly, on my immediate circumstances. While my work set-up has afforded me a measure of security, it’s also given me more time to worry—for my parents and grandparents especially. I won’t offer any trite musings on what is obviously a seismic world crisis, but if you’re anything like me, I’ll say that it helps to breathe deeply, and to think about the new system we need to build once human contact no longer seems so lethal.