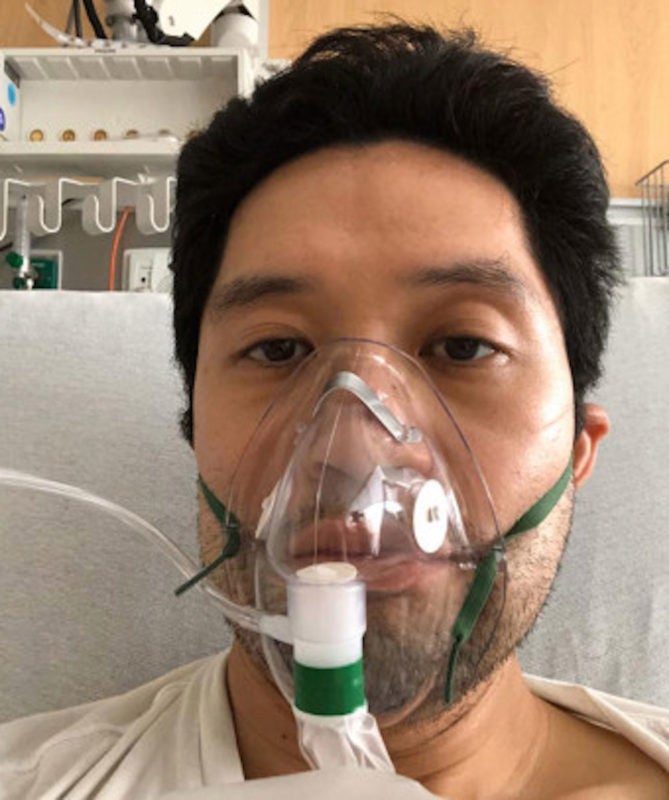 “Hello everyone. You are looking at New York State’s 951st and New York City’s 464th confirmed case of Covid-19 aka coronavirus,” he posted on Monday, March 16.

Lat called on anyone who had any contact with him “any time after around Sunday, February 23, you can play the “David Lat card” and can — and should — get tested automatically.”

His husband, Zach, a confirmed case as well, got the same symptoms two days after Lat did.

“For now, I wanted to let you all know, apologize if I unknowingly infected you — I self-quarantined as soon as I had real symptoms, but people can transmit it before they’re symptomatic — and assure you that I’m doing well,” Lat wrote.

The lawyer also expressed his frustration about the availability of testing for COVID-19.

“If you interacted with me in person after 2/23, you can cite that fact and get automatically tested,” Lat said on Twitter. “Otherwise you might have to go to the ridiculous efforts I had to in order to get a simple test that other countries have given to their citizens by the hundreds of thousands.”

Lat updated his family and friends on Tuesday with a series of tweets and talked about his current condition.

He said that he had been generally healthy; he doesn’t take drugs, rarely drinks and has no health conditions other than exercise-induced asthma, which he manages with an inhaler.

“In my current state, #LivingWithCovid, I am constantly weak and winded. I’m hooked up to oxygen 24/7. Even with oxygen, the simplest tasks are extremely difficult,” he shared. “I have never been this sick in my entire life.”

Among these tasks are going to the toilet, saying he could barely walk the five feet from the bed to the toilet “and I had to pee as quickly as possible, chest heaving with the labor of breathing, because I was going to collapse if I stood too long.”

Prior to getting sick, Lat ran the NYC Marathon twice and walked 25 miles a week, aside from three high-intensity interval training classes at the gym.

He was also a fast eater but “Today it took my 90 minutes to eat my lunch – because I kept getting winded as I ate. Who DOES that? I’m so weak, the fork wobbled each time I lifted it to my mouth.”

Lat’s husband had “a low-level flu that seems to have almost run its course after about a week.”

“But for those who get severe cases, like me, it’s been hell,” he said.

For the past ten days and counting, it has been a combination of fever, fatigue, joint aches, chills, cough, and respiratory difficulty “with no real improvement.”

Lat thanked “the talented and hardworking (but very understaffed) team” at NYU Langone Medical Center and his family and friends for their “prayers, sympathies and good wishes.”

Lat’s parents are watching after his two-year-old son Harlan in Saddle River, New Jersey while his dads are ill. Liza Paqueo (left) with her mother Nida Cortes Paqueo, who died in Manila on Wednesday, March 11 from COVID-19. FACEBOOK

“The city’s not a great place for kids these days. Kids don’t tend to get much in the way of coronavirus symptoms but they can carry it, something that my fellow parents should bear in mind,” Lat said.

Lat is the founder of the legal blog Above the Law, a website about law firms and the legal profession.

Penn Baluyut, a local community leader, also took to social media to share the story of his brother who passed away after contracting the virus, in an effort to alert the community about how dangerous this virus is.

“With sincere intentions, I am sad and obliged to inform everyone of my brother Arriba Ed Baluyut’s death as a victim of the virus,” Penn wrote in a message, now widely shared within the Fil-Am community in New York.

Baluyut’s brother Ed was based in the Philippines.

“I am making this public announcement to save anyone from this deadly virus. If Ed’s death story can save one family then his death will not go in vain,” he wrote.

Their older sister from Chicago arrived from Singapore on February 22 after spending a week in Manila to take care of their youngest brother who lives in Singapore with lung cancer. She stayed in Singapore for five weeks.

Their families in Manila gave her dinner and despedida parties and their brother Ed was her official driver.

The sister then left for Chicago last February 28. Ed and his wife Ging got sick on March 8 with fever and coughing.

“Ed became worse and rushed to the hospital where he died the following day and tested positive of the virus last March 12. His wife is still critical with the virus,” he added.

Their sister in Chicago and her husband are also sick. Their brother-in-law in Manila who always hosts the dinners and parties is also sick with the symptoms of the virus.

He is calling on the community to be safe and called on people who travelled from other countries or states to practice self-quarantine for 14 days.

“Do not let your families…see you or visit. From [the] airport, you must remove your clothes and shoes straight to laundry to wash or put in [a] big black bag. Inform your family to prepare your change of clothes and not bring your clothes inside the house,” he said.

The daughter of ‘PH35’, the first Filipino to succumb to COVID-19 shared her grief on social media last Friday.

Liza Paqueo broke her family’s silence with a Facebook post announcing the passing of her mother, Nida Cortes Paqueo, who died in Manila on Wednesday, March 11 shortly after her 67th birthday.

“A few hours ago, my beautiful mother, Nida, was cremated. She died alone without her loving family and friends around her. She was cremated, alone, without ceremony or tribute,” Liza Paqueo posted.

Paqueo grieved the fact that she and her brothers who are all in the United States, were not there for their parents.

Paqueo said that they received the news on Wednesday that her mom passed away and had COVID-19. Her father also tested positive for COVID-19. All family and friends who have been exposed to her parents are in isolation and quarantine.

“No one knows how they contracted COVID-19, but Manila is a crowded, internationally mix city of 13 million people. Speculations as to where they got it from [are] unknown, and we are leaving that to the Department of Health,” she said.

These speculations have led to social media posts about her parents and Paqueo said she wanted to clarify the gossip that has been going around, saying that her parents have not traveled anywhere domestically or internationally.

“To compound the grief and pain, rumors and malicious misinformation have circulated on social media about my parents. This has all resulted in panic, violence, threats and stigmatization of our family and loved ones. Disclosure of private information has circulated as well,” she said.

While her father also tested positive for COVID-19, Liza said he is now “in stable condition and in quarantine.”

“The Department of Health is now working with the hospitals and her father on epidemiological protocols around this infection,” she said.

Like Lat, Paqueo is calling on the people who may have met with her parents in Manila to come out and take precautions.

“If you have been around my parents between February 29 (when my mother first reported symptoms) and her death on March 11, then we encourage you to self-isolate for 14 days. And if you have a fever and a cough, please report to the Department of Health. It is the responsible thing to do. There is no stigma with this disease,” she wrote.