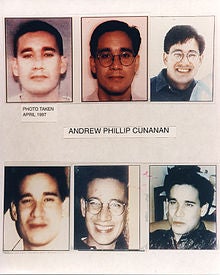 The many faces of Andrew P. Cunanan used in the FBI 1997 posted of the Ten Most Wanted. PINOY

CHICAGO—Twenty years ago on May 4, 1997, this city’s news outlets were agog with reports of the brutal murder of Lee Miglin, a local 72- year-old real estate tycoon.

The victim’s face, arms and legs were bound with duct tape. He was stabbed 20 times with a screwdriver. His throat was cut open with a hacksaw. His Lexus car and some gold coins were missing. Chicago Police searched frantically for clues and motives.

A car with Minnesota registration was found abandoned at the crime scene and was later traced to its owner, David Madson, a Minneapolis architect. But Madson was also dead. He was shot in the head and back. His body was found in a lake in Rush City, Minnesota, on April 29. In Madson’s apartment, another body was found wrapped in an area rug. Jeffrey Trail, a former U.S. Navy officer and a propane salesman, was beaten to death with a claw hammer.

Police investigation led to Andrew Phillip Cunanan as the prime suspect in the killings. Until a year before, Cunanan and Madson were living in San Francisco as lovers. Their relationship had gone cold, and Madson moved to Minneapolis where Trail, a friend of Cunanan, had taken residence.

Trail was actually Cunanan’s first victim. His gun was used to shoot Madson. Their deaths on April 24 was the start of Cunanan’s cross-country killing spree. On June 12, 1997, this Filipino American would be the 449th fugitive to make it to the Federal Bureau of Investigation (FBI) Most Wanted List.

Cunanan was born in National City, California, on August 29, 1969 to a Filipino father, Modesto, who was with the U.S. Navy fighting in the Viet Nam War at the time of his son’s birth. His mother, Mary Anne Schillaci, was Italian American and a devout Catholic. He was the youngest of their four children. Andrew was sent to exclusive parochial schools. He served as an altar boy. He was tested with an I.Q. of 147.

He was also diagnosed with psychopathy, an anti-social behavior with an inability to show empathy. When Andrew was 19, Modesto abandoned his family to avoid arrest in an embezzlement case. It was also that time when Andrew told his mother that he was gay. In an ensuing argument, Andrew slammed his mother against a wall. She suffered a dislocated shoulder.

Andrew enrolled in 1989 at the University of California San Diego, majoring in history. He dropped out and became a mainstay at the Castro District in San Francisco. At this high-class gay quarter, he assumed the role of gigolo to old wealthy men. Aside from sex, he also sold drugs and was involved with petty thefts. Andrew was said to crave for attention– always fashionable, paying for everyone’s drinks– often living beyond his means. A year prior to his murderous journey, Andrew was said to have lost the financial support of his main “sugar daddy.”

From Chicago, Andrew Cunanan drove east with Miglin’s vehicle. On May 9, he wound up at the Finn’s Point National Cemetery in Pennsville, New Jersey. Using Trail’s gun, he shot and killed the caretaker, William Reese, 45, who met his death while watching a TV Christian program. Cunanan abandoned the stolen Lexus and took his fourth victim’s red pickup. Unlike the three previous murders, Reese’s murder was a simple crime of opportunity. 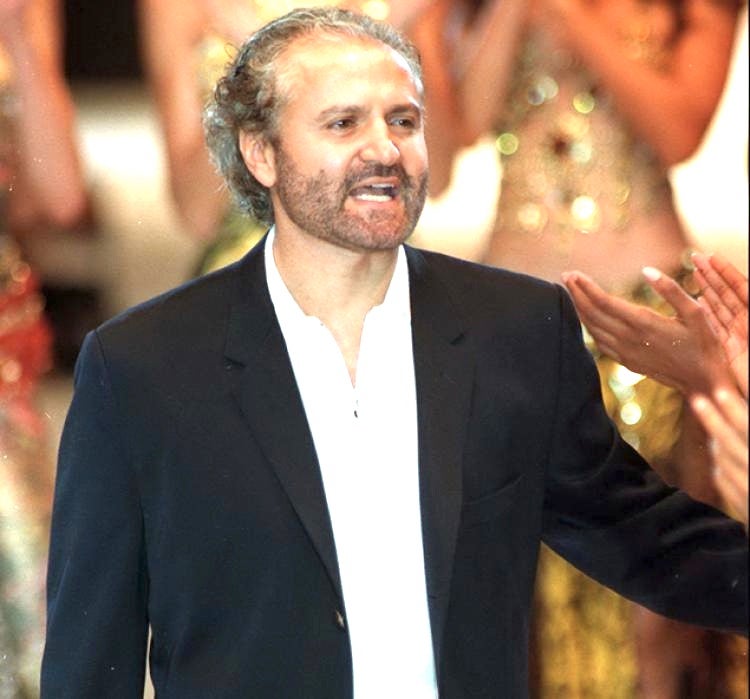 Cunanan drove down south to a tony section of Miami Beach, Florida. In the next two months, he would live without even an effort to conceal his identity. He checked into inexpensive hotels signing his own name—just like when he pawned the gold coins he stole from Miglin.

On July 15, 1989, Cunanan went to the mansion owned by renowned fashion designer, Gianni Versace. When the two met at the front steps of his home, Cunanan shot Versace twice and then he escaped on foot.

Police would later find the red pickup that Cunanan had stolen from the New Jersey caretaker. Inside were a passport, the clothes he was just wearing and newspaper clippings with accounts of his crimes. With the death of the celebrated Versace, Cunanan’s killing spree had caught international attention, a fulfillment of what Cunanan had longed for. The FBI and the police flooded the Miami area with leaflets showing half a dozen different mug shots of their fugitive.

On July 24, nine days after Versace was gunned down, a shot was heard from the second floor of a houseboat docked in Miami Beach. Police would later find the half-naked body of 27-year-old Andrew Cunanan in his bed with the latest Miami tabloids with bold headlines of his misdeeds.

Using the same gun he stole from Trail and used to shoot Versace, Reese and Madson, Cunanan put a bullet to his right temple. Police found an extensive collection of the books by Christian apologist C.S. Lewis, leaving them a few clues on what motivated Cunanan to the five murders.

Press reports speculated that Cunanan was taking revenge for being diagnosed with HIV. But the autopsy revealed he tested negative for the virus. Some said his motive was his jealousy of Versace being the “gay-icon.”

Twenty years after his killing spree, Cunanan continues to fascinate—ABC just aired on July 7 a prime-time one-hour documentary. “Law & Order” devoted an episode based on his murders. A dozen films and books were produced about Cunanan.

Intelligent, personable and youthful, Cunanan had chosen a dark path the led not only to his tragic end, but also to his five victims’ as well.

Andrew’s family seems to have never completely dissociated itself from him. His cremated remains are interred in the mausoleum at Holy Cross Catholic Cemetery in San Diego, California.