Anti-Asian racism spreading with coronavirus across US

Anti-Asian racism spreading with coronavirus across US 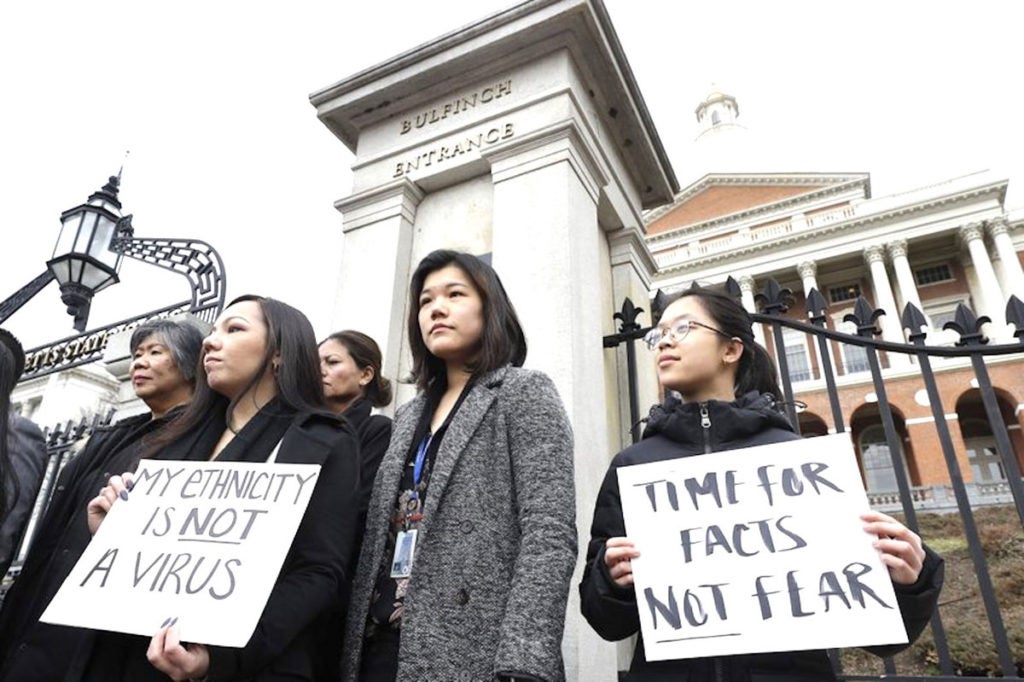 Jessica Wong, of Fall River, Mass., front left, Jenny Chiang, of Medford, Mass., center, and Sheila Vo, of Boston, from the state’s Asian American Commission, stand together during a protest, Thursday, March 12, 2020, on the steps of the Statehouse in Boston. Asian American leaders in Massachusetts condemned what they say is racism, fear-mongering and misinformation aimed at Asian communities amid the widening coronavirus pandemic that originated in China. AP PHOTO

BOSTON— Asian American leaders in Massachusetts on Thursday condemned what they say is continued racism, fear-mongering and misinformation aimed at Asian communities amid the coronavirus pandemic that originated in China.

State lawmakers, local officials and public health professionals speaking at the steps of the State House cited recent incidents in London and New York City in which Asians were targeted.

The New York Posts reports a teenager kicked an Asian man in the back and told him to go back to his country while screaming “f*cking Chinese coronavirus.”

Elsewhere in New York, law enforcement sources told the Post someone slugged an Asian woman while saying “Where is your corona mask, you Asian b—h.”

Both cases are being investigated as possible hate crimes.

In Southern California, an Asian American woman eating at The Bungalow in Santa Monica says a bartender threw hand sanitizer toward her before having security escort her out.

“I am mortified by the type of behavior and am disgusted by the prejudice I had to experience,” she wrote on Yelp.

Just yesterday, a statement released by more than 250 Asian American and Pacific Islander groups called for “visible and strong leadership to address the growing hostile rhetoric against the Asian American community.”

Russell Jeung, the chair of the Asian American Studies Department at San Francisco State University, reports he has seen an upsurge of health officials taking a stand against anti-Asian discrimination. He said nearly 1 out of four news reports between February 23 and March 7 included official statements against discrimination.

They also called out news organizations that continue to link the virus with Asians.

Running stock images of Chinatowns and Asian people wearing face masks with coronavirus stories, as well as using the phrases “China virus” or “Wuhan virus” aren’t reflective of the current pandemic, which has hit Italy particularly hard, said Elisa Choi, who heads the Massachusetts chapter of the American College of Physicians.

Suffolk County District Attorney Rachael Rollins said her office wasn’t aware of any local incidents of discrimination against Asians that have risen to the level of a crime.

But she and others speaking Thursday noted that other big cities are already dealing with concerning incidents.

In New York last week, police say a man of Asian descent was sprayed with Febreze on a subway train in a coronavirus-related hate crime that was captured on video.

Police in London have charged two teens in a ” racially aggravated assault ” against a 23-year-old Singapore university student last month.

Much of the bigotry Asians are experiencing is on social media, rather than physical encounters on the street, said state Rep. Tackey Chan, a Democrat from Quincy, a Boston suburb with one of the state’s largest Chinese communities.

And “micro-aggressions” — mundane, almost imperceptible social slights — have become a part of daily life for many Asians since the virus emerged in December, said Sam Hyun, a member of the Massachusetts Asian American Commission, a state agency that advocates for Asian communities.

“It’s the whispers in the grocery, the side glances, the avoidance,” he said.

Low income Asian American workers are also struggling as customers continue to stay away from Boston’s Chinatown and other Asian neighborhoods, despite efforts by officials to support local Asian-owned businesses, said Karen Chen, of the Chinese Progressive Association, a Chinatown advocacy group.

For most people, the new coronavirus causes only mild or moderate symptoms, such as fever and cough. For some, especially older adults and people with existing health problems, it can cause more severe illness, including pneumonia, and death.

The vast majority of people recover from the new virus. According to the World Health Organization, people with mild illness recover in about two weeks, while those with more severe illness may take three to six weeks to recover. With reporting from AsAmNews.com.