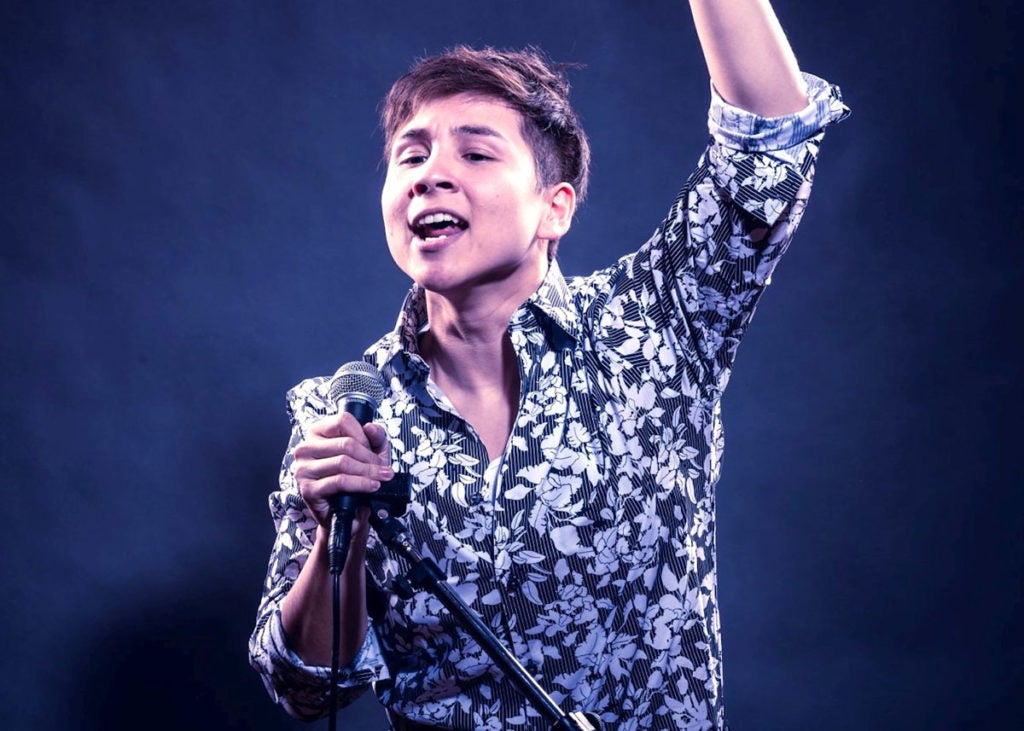 MINNEAPOLIS, Minnesota — Filipino American actor Kai Alexander Judd plays Dash, a transgender spoken-word performer, in the musical “Interstate.” Judd did not have to do too much research into his character. He came out as a transgender man himself two years ago. (Glossary of transgender terms can be found here.)

The musical’s  world premiere is helmed by Fil-Am theater director Jesca Prudencio and staged by Mixed Blood Theater. Music and lyrics is by Melissa Li and book by Li and Kit Yan.

In the musical, Dash and singer-songwriter Adrian are in the process of affirming who they are. Adrian comes out as a lesbian and Dash comes out as a transgender man. As they declare their identities, both discover which connections in their lives will give way, hold or develop.

Judd, whose mother is Filipino, was born and raised in Northern California. “I started performing when I was six years old, doing school plays and community theater and I’ve been a theater nerd ever since.”

However, Judd almost gave up on theater. Constantly auditioning for female roles had been adding to his unhappiness of “pretending to be something I wasn’t.”

“I thought I’d have to find a new career. I didn’t want my loved ones to hear my voice or look at my body for too long, let alone crowds of strangers. I lost my passion for theater because all I wanted to do was hide. It was devastating.”

After Judd came out, he found support from friends, mentors and medical professionals. After he began hormone therapy for transitioning, “I now sing in the tenor repertoire I’ve always dreamed of. I’ve started to feel at home in my body and I walk into auditions with more confidence than I ever have before.”

Credits during and after his coming out process include male roles such as James in “James and the Giant Peach” and the Baker in “Into the Woods.”

He then discovered “Interstate” would have its world premiere only a mere three hours’ drive from Viterbo University, where he was studying Musical Theatre.

He’d already heard about the show when it was still being developed in New York (where Fil-Am actor Jon Viktor Corpuz played Dash.) In addition to wanting to thank the show’s creators for making a story with transgender characters, “I figured it was worth saying I tried auditioning,” Judd says.

“This opportunity to play Dash, a character whose identity so closely aligns with my own, feels different and special.”

Judd says that during rehearsals, he constantly finds himself realizing “that Dash is an Asian American trans guy just like me, so I don’t need to try to be anything I’m not. Though it’s not the point of theater, it’s exciting to be seen at face value for a change.”

As for working with a Filipino American director, he points out that “this is only the second time I’ve ever been directed by a woman, which is such a shame, and I am hopeful to see change on the horizon in that regard.”

“I adore working with Jesca. I can count the number of Fil-Am theater professionals I’ve worked with on one hand, so to have a strong Filipino American woman in charge of the room is thrilling.”

Prudencio is founding artistic director of theater group People Of Interest. Recent credits include a staged reading of “Something Under the Balete Tree” by Fil-Am playwright Ren Dara Santiago in New York; full productions of “Man of God” in Los Angeles, “PDA” and “Actually” in San Diego, and “The Great Leap” in Chicago (which featured Fil-Am actor Glenn Obrero).

“We joke about our culture daily. She even made lumpia and adobo for a rehearsal potluck the other night! My only complaint is that when she gives me [directorial] notes, it feels like I’m in trouble with my tita.”