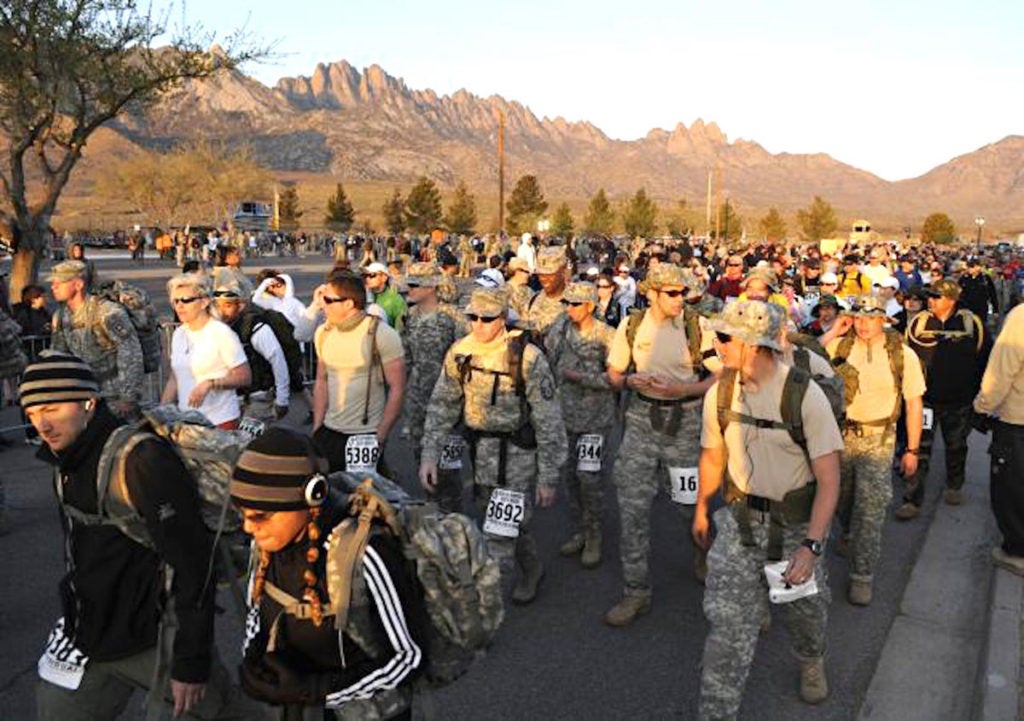 WHITE SANDS, New Mexico – More than 9,000 participants are scheduled to march through the high desert terrain of White Sands Missile Range during the 2020 Bataan Memorial Death March scheduled for March 15. Registration is open through March 14.

The challenging march honors a special group of World War II heroes responsible for the defense of the islands of Luzon, Corregidor and the harbor defense forts of the Philippines.

On April 9, 1942, tens of thousands of American and Filipino Soldiers surrendered to Japanese forces. The Americans were Army, Army Air Corps, Navy and Marines. Among those seized were members of the 200th Coast Artillery, New Mexico National Guard.

Summer Irvin, Marketing Director for Family, Morale, Welfare and Recreation, said there are several events scheduled during the Bataan weekend to include a concert on March 13 at 7 p.m. featuring Gary Allan and Lee Brice at the New Mexico State University (NMSU) Pan American Center.

“There are so many visitors that come in from out of town, so we work with the City of Las Cruces and the surrounding communities,” Irvin said. Organizers have also added a new seminar called “How to Ruck” presented by GO RUCK at 1:30 p.m. March 13 at the Las Cruces Convention Center.

The “Meet the Bataan Survivors” seminar is back this year at 3:15 p.m. March 14 at the Las Cruces Convention Center. Irvin said this year all the survivors who wish to speak will be available in one room.

Something new this year is the addition of a Descendants Display Room which will be open from 2 p.m. to 6 p.m. on March 12 and 8 a.m. to 6 p.m. on March 13 and 14 at the Las Cruces Convention Center. WSMR Army Community Service is inviting descendants to contribute Bataan memorabilia such as storyboards, photos, or any historical information or artifacts they would like to share with Bataan Memorial Death March participants and attendees.

“As the event continues each year we have fewer survivors that are able to attend, so we are really counting on the descendants to continue sharing their stories,” Irvin said.

The displays will be set up museum style at the Convention Center. Items will need to be delivered to the WSMR ACS Building 250 on Rock Island Ave. by March 1.