Alaska professor calls out a children’s book as ‘racist’

Alaska professor calls out a children’s book as ‘racist’ 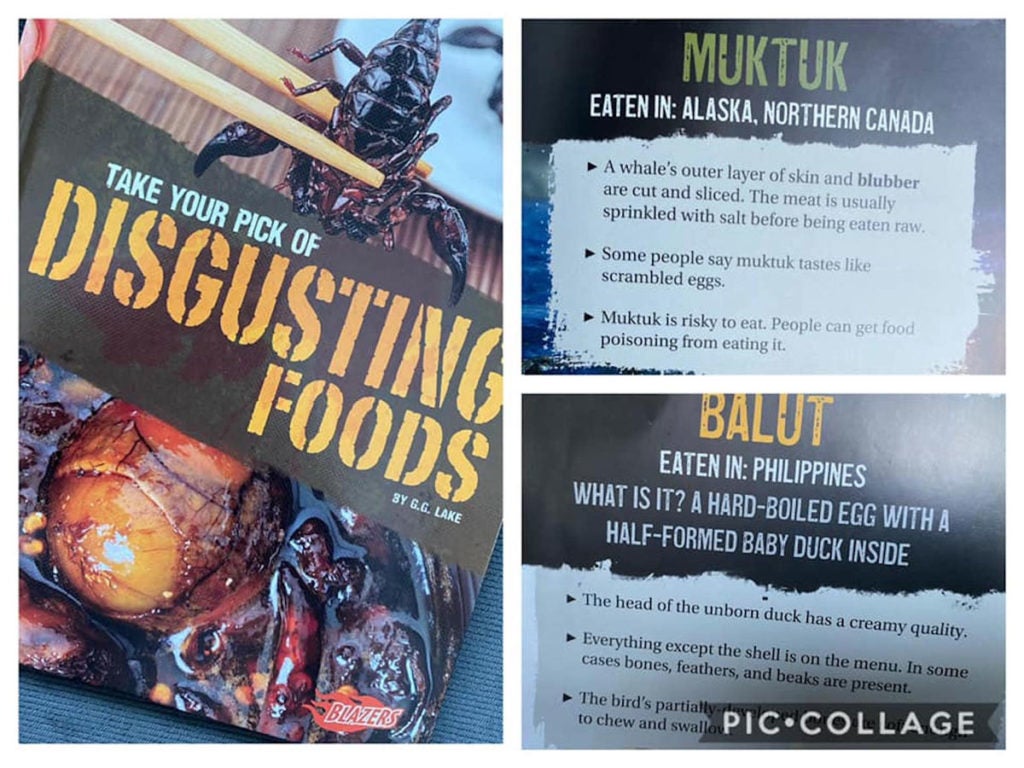 A copy of the offending book “Take Your Pick of Disgusting Foods.” CONTRIBUTED

It was an ordinary day for EJ Ramos David and his two kids, 10-year-old Malakas and 7-year-old Kaluguran. This was a usual father and kids bonding in a car after school. But what happened next was a revelation in how some Western people view the diverse Philippine foods, customs, cultures and traditions. Wait, not only the Philippines, but also other foods, say Athabascan.

On February 24, David and the kids were driving home from school. Kaluguran borrowed a book from the school library. Naturally, the elder boy, Malakas, started to browse the book. He asked if his father ate balut. To David, it was just a usual question. Anyway, they just spent a long vacation in the Philippines last year where the kids had the chance to eat Philippine delicacies like taho (soy bean curd in syrup), ice candy, halo-halo, to mention a few.

But things took a different turn when the boy exclaimed, “Oh, what? They have muktuk on here?

‘Our food is not disgusting’

The book the kids were reading was Take Your Pick of Disgusting Foods by G.G. Lake, published by Raintree UK, an imprint of Capstone in 2017. Capstone publishes children’s and young adults’ books that are “educational and interactive.” Its main office is based in Mankato, Minnesota. 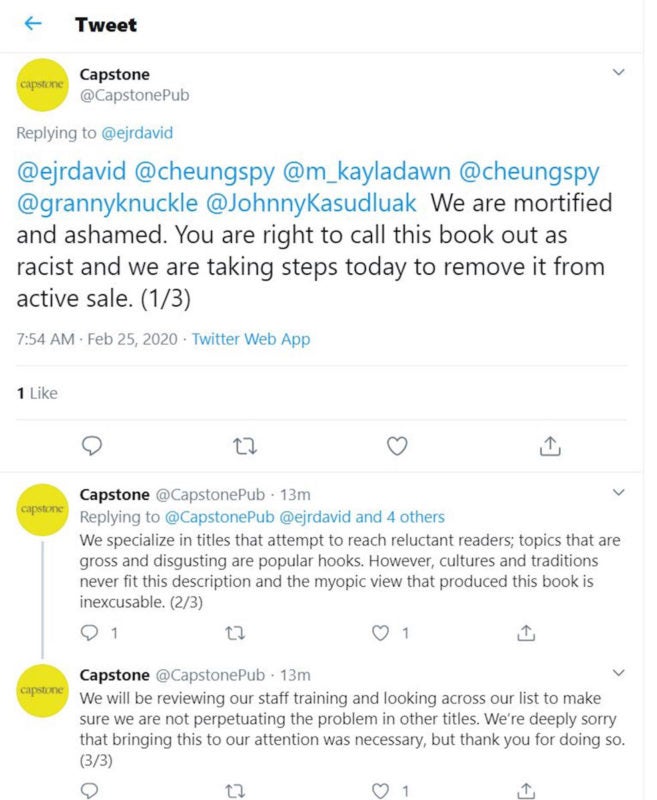 David took to Twitter to call the attention of Capstone Publishers. He posted:

“My 7 yr-old came home with this book from his school library. It has 2 Filipino foods & 1 Alaska Native food. This book is explicitly telling my Filibascan kids that their cultures are disgusting. It’s 2020, & the books in our schools are still teaching kids to be racist.”

David is a professor of psychology in the University of Alaska in Anchorage. He is a scientist and an author. He writes about internalized oppression and colonial mentality. Growing up in America, he described it as oppressive with plenty of discrimination. 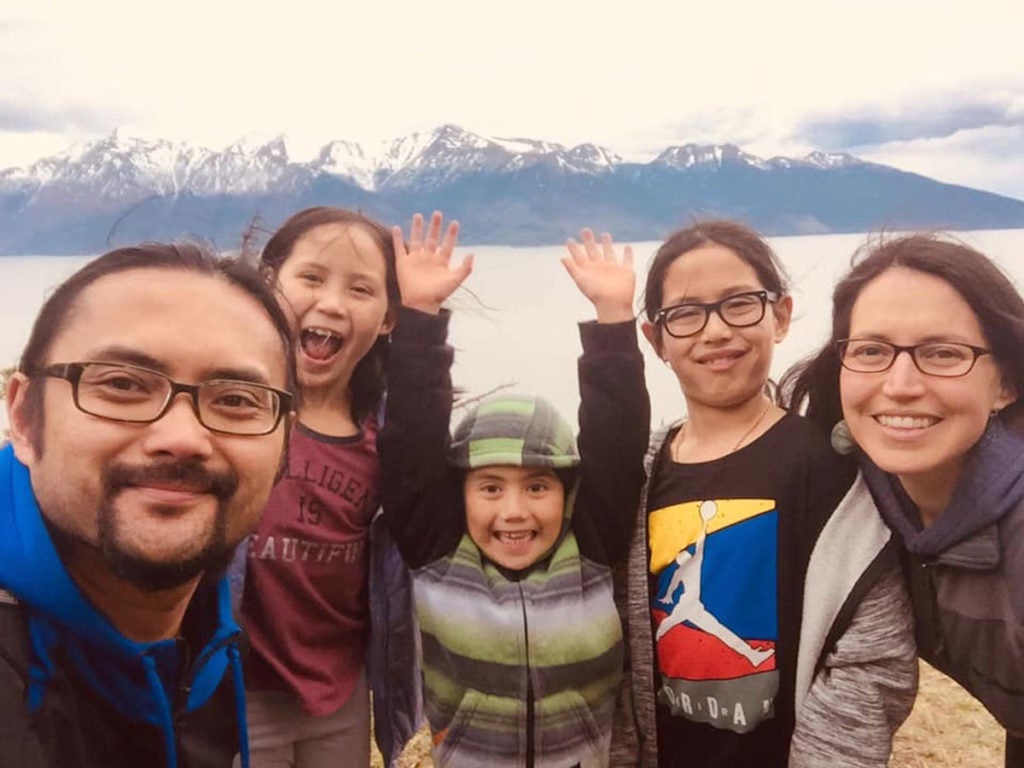 “You are right to call this book out as racist and we are taking steps to remove it from active sale. We specialize in titles that attempt to reach reluctant readers; topics that are gross and disgusting are popular hooks. However, cultures and traditions never fit this description and the myopic view that produced this book is inexcusable. We will be reviewing our staff titles. We’re deeply sorry that bringing this to our attention was necessary, but thank you for doing so.”

“This is why we speak up against racism and other forms of oppression. We hope to get people to a place where they know better, and then we hope that they do better,” David explains.

As of this writing, the book is no longer available on Capstone’s website.

This is not the first time some foods have been considered disgusting by others. In 2002, popular reality TV show “Fear Factor” dared contestants to eat balut. Since then, balut-eating contests has been featured in “Amazing Race Australia 2” and “Hell’s Kitchen.” In 2012, a Filipino restaurant, Maharlika promoted their location in Brooklyn by holding a “balut-eating” contest.

In 2015, a UK-based woman created a campaign at Change.org (https://www.change.org/p/proceso-jaraza-alcala-make-balut-eggs-illegal-in-the-philippines) to make balut eggs illegal in the Philippines. In the campaign, the creator claimed that “It is a cruel and barbaric practice, unnecessary in today’s world.” The campaign had 33 supporters before it was closed.

Pierre Cantillero, a Filipino food enthusiast and traveler, claims that eating a specific food is an acquired taste. He says that a country’s cuisine is the edible “love child” of history and geography.

“If you understand their history, you will understand why they eat certain foods that are not acceptable to another culture. Then, they’re not disgusting. I draw the line though on pets like dogs. I will never eat dogs,” Cantillero says.

Connecting the Pots author, Malou Perez-Nievera, narrated that her son once hid a bowl of dinuguan under the table when his friends came for a visit so they would not be judged by what they ate.

“Our food is part of our culture and our culture should be passed on to the next generation. Bringing our food to our adopted country is a symbol of identity; a symbol of pride.  Our food mirrors our culture, our history, our values and beliefs,” Nievera says.

“For many people, especially people of color and immigrants, our foods have deep meaning. Our traditions and rituals and sacred memories take place around food. Our food is our connection to our homelands, to our cultures, and to our ancestors. To call our foods disgusting is extremely damaging.”