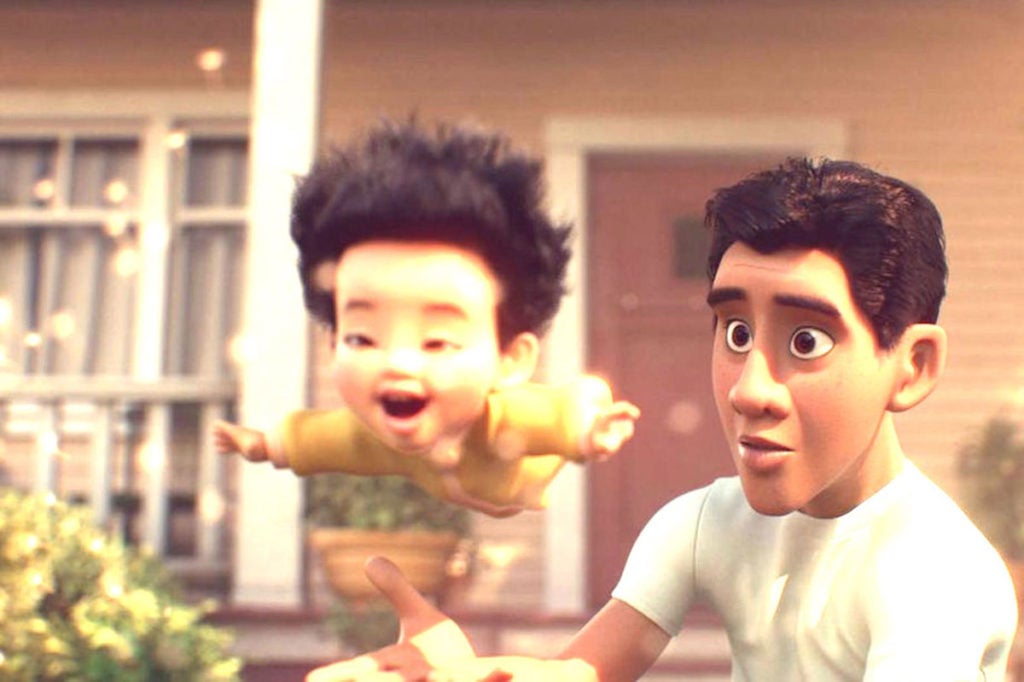 “Float” is just 7 minutes long, but the animated short’s moving story and message have stuck with me ever since a friend shared it with me a few weeks ago.

The film, created by Filipino American animator Bobby Rubio, drew much attention a few months ago as the first Pixar film featuring Filipino characters.  That is significant, but Float is more than that. It’s a moving reflection on fatherhood that would resonate in any community.

It opens with the Filipino father lovingly playing with his son who he suddenly discovers can float and fly.  It’s an incredible, wonderful ability. But it’s also one that the dad quickly realizes would make his son stand out. To  many, he would even come across as strange.

As Rubio has explained in media reports, the film was based on his own experience raising a son Alex who is on the autism spectrum.  He had a hard time accepting his son’s condition.

“I was struggling when the diagnosis first came up,” he said in an interview with KQED Public Radio in San Francisco. “It took me a while to accept my son’s diagnosis”

“If I’m being honest, I went through a depression,” Rubio said.

That was the first key realization for Rubio. The next one came as he began the project. As I noted, “Float” drew attention because it featured Filipino characters. And that almost was not how Rubio was going to tell the story.

“When I first thought of the short, I actually was thinking of making the characters white,” he said in a TV interview. “And it’s because of my unconscious bias, I assume because I was like, I don’t know if anyone wants to see a Filipino American.”

But he said a coworker told him: “This is a story about you and your son. How’s your son going to feel when he looks up at the screen and that character is white.”

Rubio said: “That hit me and I didn’t want my son to think that he wasn’t worthy of it. So from that point on I was like, ‘Okay, I’m doing this. We’ll tell our story.’ And we’re going to make them Filipino American.”

“Float” tells only part of the story, it turns out. The public radio interview featured questions from listeners one of whom was another Filipino American with a child who also had autism. What he shared resonated with Rubio.

“How much of your initial misgivings or guilt or shame was formed or influenced by Filipino culture or Asian culture toward people who have disabilities,” the listener said. “There is definitely a recurring theme in that.”

He was referring to the way autism and mental disabilities in general are taboo topics in our culture which Rubio readily acknowledged.

“For sure, I know that in our community we try to hide it and bury it,” he said.  In his own family, he added, some reacted to his son’s condition by telling him: “He looks fine. What are you talking about? He’ll outgrow that. Don’t worry about it.”

To these, Rubio responded by affirming that his son has a condition: “I don’t want to just sit on this .”

He explained the decision to make the child float as a way of highlighting the way he is different. “It was a visual that we liked,” he said in the radio interview. “We wanted something that you would notice. A visual of a floating child automatically makes him different.”

That actually was another reason I found “Float” special.

Fatherhood can be challenging even if your child does not have special needs.  We’ve heard the cliche about how every child is different and special.

But as any parent would probably acknowledge, every child is different and special in ways that a mother or father will not always find easy to understand and accept. Every child is like a story that you simply have to watch unfold, embrace and celebrate.

“Float” is a powerful reminder of that.

LATEST
Modified quarantine
Urgent need for mass testing
A calibrated easing of restrictions
Recollections
Two enemies at our gates
MOST READ
usa Fil-Ams braving frontlines against coronavirus
usa PH-born Filipina is state of Washington’s top adviser on COVID-19
usa Priests as COVID-19 frontliners
usa A day in the life, in the Age of COVID-19, Part 1
usa The power of lying
usa How we’re are coping with the pandemic across the globe
usa Loss of smell, taste, might signal pandemic virus infection