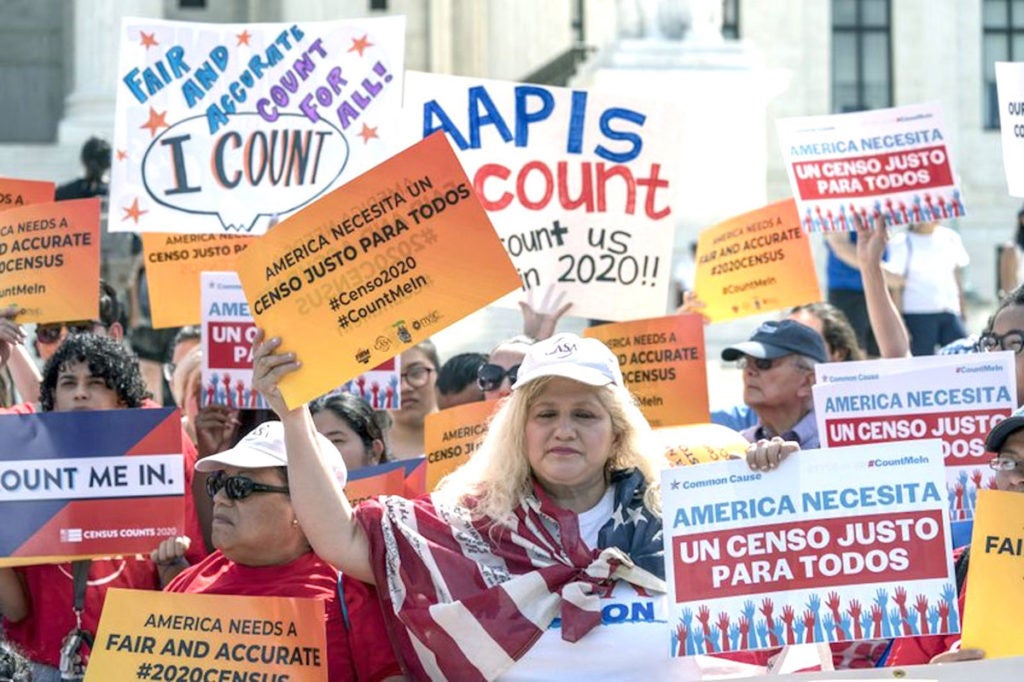 In a Capitol Hill hearing that stretched more than three hours February 12, Census Bureau Director Steven Dillingham’s long-scheduled appearance before the House reform and oversight committee coincided with the Government Accounting Office’s release of its latest report on census preparation, which deemed the bureau’s readiness for 2020 operations “mixed.”

Since 2017, the GAO has deemed the census a “high-risk” operation.

Topping the concerns at the hearing was the finding that the Census Bureau is behind on its hiring goals.

About a half-million people will be needed to help get a full count, and for each position, Dillingham said, he would like to have six applicants. But 202 of the bureau’s 248 regional offices are still understaffed, with the first of five mailings targeting 95% of U.S. households due to be sent out in less than a month.

Dillingham said he believes concerns about the rate of hiring are premature. He expects to be fully staffed by April when the people knocking on doors to get questionnaire responses from households that haven’t responded either online or by telephone will be needed.

Citing the low unemployment rate as a challenge, he promised, “We will continue to recruit all through the census.” Besides, he said, “20 million college students are out there with student loans and needing money.”

Also of concern to committee members was the report’s description of the Census Bureau falling behind on forming partnerships with the community organizations, businesses and nonprofits that will be crucial in educating the public and maximizing survey response rates, particularly among hard-to-count populations.

Fraud and cybersecurity form the other key concern in the GAO report.

California Rep. Katie Porter entered into the hearing record a fund-raising mailing from the Republican National Committee that gives every appearance of being the census questionnaire.

Porter said the RNC sent a similar mailing in 2010, that led to legislation outlawing such misrepresentations.

Committee Chair Carolyn Maloney, of New York, called the RNC mailing “outrageous” and vowed to revisit that legislation and add enforcement mechanisms to it.

“Clearly, people are violating that,” Maloney said, looking at the mailing both Porter and California Rep. Jimmy Gomez had brought to the hearing. “The census is one of the sacred things in our Constitution.”

The adequacy of the Census Bureau’s preparations for prioritizing online responses also came up. Echoing his reassurances about the pace of hiring, Dillingham said that other targets the Census Bureau hasn’t met had been set higher than he expected would be necessary.

Although the Census Bureau decided on Feb. 7 to change the computer system it will use for online responses, Dillingham said it’s being set up to accommodate up to 600,000 users at once. But realistically, said his deputy, Al Fontenot, traffic at any one time is likely to be perhaps only a third of that.

Many committee members worried that their constituents lack adequate access to computers to ensure they’ll be counted. Dillingham and Fontenot described various plans, such as working with community libraries, but Michigan Rep. Brenda Lawrence pointed out that some libraries in her district have limited hours.

Missouri Rep. Lacy Clay noted historic census undercounts of African Americans — 718,000 people in 2010, he said — and noted the Census Bureau itself estimates that 60% plan to wait until someone visits their home before they’ll respond to the census.

Clay asked what outreach the bureau is planning, and specifically if it includes weekly newspapers and radio. Fontenot said a black advertising agency has partnered with the census’ primary advertising firm, Young & Rubicam, to help in communication efforts.

Michigan Rep. Rashida Tlaib complained about the reversal of the Census Bureau’s decision after 2010 to add “Middle Eastern/North African” as an option for the final question on the census questionnaire, about ethnicity. If, instead, people of that ethnicity have to identify themselves as white, she said, it will affect health research, language assistance, civil rights, minority businesses’ ability to get loans and more.

Writing in an identity, “doesn’t have the same impact and you know that. You’re making us invisible. You’re erasing us,” Tlaib said.

Vietnamese population, including many refugees, asked how the census will enumerate those with limited or no English language skills.

Besides the census questionnaire being printed in English and Spanish, online forms are in 12 languages and, Fontenot said, materials including instructional videos total almost 60. But, he said, the primary way the census plans to meet people’s language challenges is by hiring partnership specialists with language fluency.

“We do count on our partners for language assistance,” Dillingham said.

New Mexico Rep. Deb Haaland shared an estimate that for every 1% of New Mexico’s population not counted in the census, the state loses $600 million of federal funding per decade. That’s money badly needed for “schools, health care programs, roads, so many other services,” particularly for Hispanic, Native and other communities of people of color, she said.

Unemployment is relatively high among the Spanish- and Navajo-speaking people Haaland represents, yet job applicants from her district have waited weeks to hear back from the census, she said.

“I know what it means for people to open the door and see someone who looks like them,” she said.

Dillingham said the bureau has boosted pay rates in response to unemployment and cost-of-living considerations in different communities. Fontenot cited the approval just last week of a $2 million budget for local advertising in “low-count areas.”

“If there’s more recruitment needed, we will make those efforts,” Dillingham said.