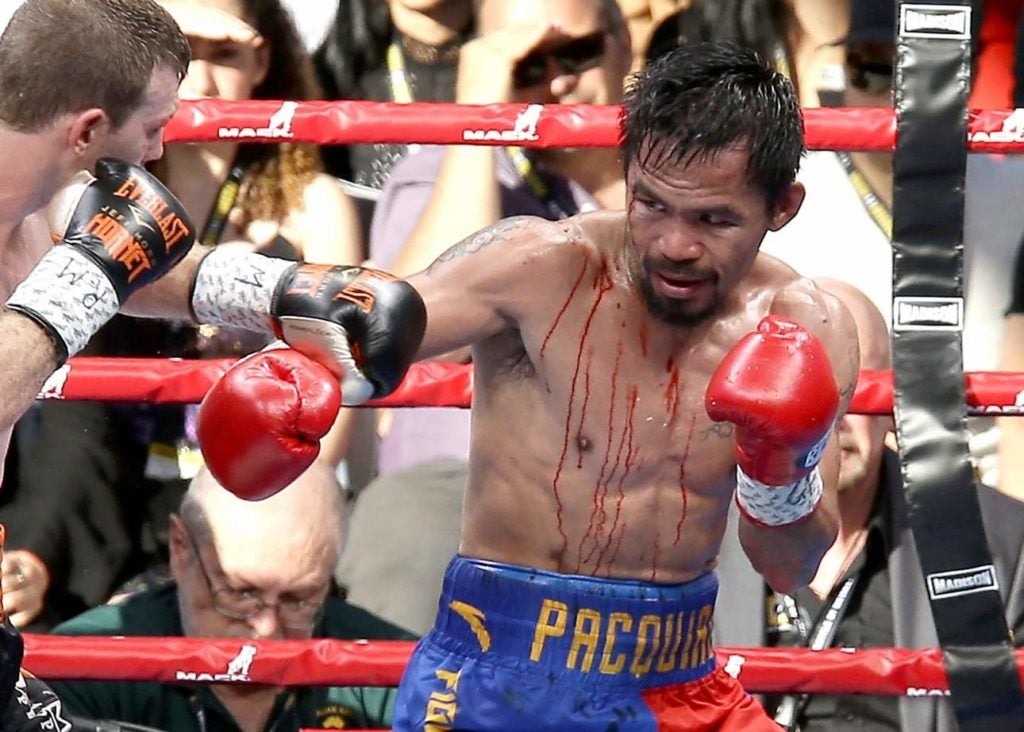 If you are still talking about Manny Pacquiao a week after “the fight,” maybe you need to pay more attention to Donald Trump and the G-20.

You know, the important stuff.

Now that would have been a fight. Trump in a “You mess with my democracy?” finger to the chest of Putin would have got my pay-per-view dollar.

But likely old Orange-head and Putin were locked in a bromance clinch the whole two-hour meeting.

Back to that Pacquiao/Horn debacle. Almost as fake, but at least it drew real blood on free cable.

That the fight was free should have told you something. Pacquiao has lost his luster.

After years of pay-per-view dominance, it was that Mayweather debacle in 2015, with the loss and the shoulder alibi, when the Pacman started losing it. And now he’s giving it away.

That’s one thing I’ve noticed about those type of fights. You never feel they’re rigged.

You never feel there’s a funny smell in the air and it’s not just the blood and spit flying around the ring.

The winner is clearer, maybe not by knockout, but by submission. I’ve seen a lot of fights and rarely is there a situation where you wonder if the judges were watching the same fight. Not if the guy or gal who is about to have all his ligaments torn out by an arm bar taps out.

So of course, after the Pac-Horn fight I was shocked especially because Horn was about to lose on a TKO. The ref was going to stop it. But Horn wasn’t tapping out.

Apparently, that was enough to win against Pacquiao these days. The ref should have protected Horn and ruled him out. But that was Manny’s last best hope.

Did Horn get some kind of jolt to win the last two rounds? No. But he fought on. And then the judges–unbelievably–gifted him.

What we have is the weird subjectivity of boxing scoring, which makes ice skating scoring seem like a science.

The fight at Brisbane’s Suncorp Stadium was scored 117-111 by Waleksa Roldan and 115-113 each by Chris Flores and Ramon Cerdan,.

The latter two, maybe are plausible. But 117-111 through the eyes of Roldan?

Was he fooled by Pac’s bloody mess caused by Horn’s illegal head butts? That should have cost Horn points.

Was he fooled by Manny’s inability to knock out Horn? Points against for failure to tame a young lummox?

Horn was a mauler, and tried to take advantage of his size advantage over Pacquiao. In that sense this fight was more UFC/MMA than it should have been. But no matter how diminished Pac’s skill’s, he was not outboxed by Horn.

That the Philippines Gaming and Amusements Board requested a rescoring is interesting. It validates you weren’t alone in what you saw.

But the WBO, the entity in charge isn’t changing a thing. It will go over the scoring, but it’s not changing the outcome.

“I would be very grateful if the GAB can provide any evidence indicating fraud or violation of law,” WBO President Francisco Valcarcel said in a letter to the GAB dated Thursday.

“The purpose of this review is to be able to give the fans certainty of who was the winner of the bout, even though we do not have the power to reverse the decision of the judges.”

So now that official bodies have said hell with you. We are back to reality. Boxing is a screwed up game when left to the subjectivity of judges.

If you saw the first Pac-Bradley fight, if you’ve seen any boxing in your life, you know this is one of the squirrelly things that make you want to say, “No Mas.”

Pac seems to be involved in a lot of these type of fights.

But here’s what I think is going on. It’s all part of the act.

Pacman doesn’t lose when he made $10 million plus bonuses from the viewings in the Philippines, according to ESPN.

Horn made a guaranteed $500,000, but with incentives from the sold-out Brisbane stadium and endorsements, he could reach $2 million.

These are, as they say, the “known” payouts. Who knows what lurks in a brown paper bag somewhere in the dark.

But by all accounts a quality payday for a both fighters, especially the 38-year-old Philippine tax-paying senator—simply for losing.

Pac has a rematch against Horn possibly. So we might be seeing a rehash of the Bradley story, where Pac comes back the vanquished Filipino seeking revenge.

But I also think Pac has hurt himself post-Mayweather—with his own politics.

As a senator, he is not exactly what many had hoped for—a man of the people.

Pac could use a little image builder. Being a robbed Filipino works wonders for the psyche of Filipinos everywhere.

Especially global Filipinos in the U.S. who see Pacquiao like the old salt-crusted bottle of patis on the family dinner table. He’s past it.

Those days are gone.

I didn’t hear anyone talking about his fight anywhere. No buzz at all.

For me, my distaste for boxing goes back to that first Bradley fight. At $70 for pay per view that was enough. Integrity and boxing don’t belong in the same sentence.

What made matters worse was Pac’s homophobic statements wrapped around his hyper-religious views. That turned me off and many others in the U.S. and around the world to the Pac.

Ah, but now a new Manny emerges. A Filipino robbed of victory! Even with a $10 million payday, it’s an injustice!

That should rile up the ire in the hearts of Filipinos everywhere.

Pac needs all that to win back the people he’s alienated and lost, especially now that he’s half the fighter he was. And he’s decent enough not to charge you directly on pay-per-view, but just on free cable. What a guy!

Maybe it’s time for Pac to simply hang’em up, and concentrate on doing more to help the poor in the Philippines.

Columnist Emil Guillermo is an award-winning journalist and commentator. He is based in the North American bureau.