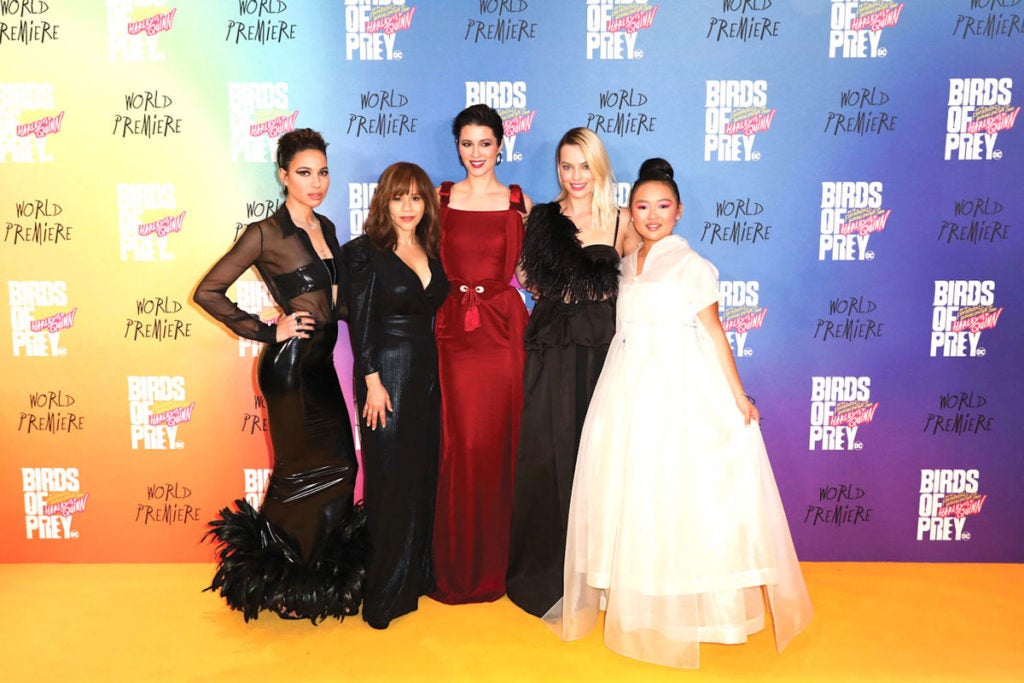 Ella Jay Basco with the rest of the girl gang at the world premiere of Birds of Prey (And the Fantabulous Emancipation of One Harley Quinn) in London. From left: Jurnee Smollett-Bell, Rosie Perez, Mary Elizabeth Winstead and Harley Quinn herself, Margot Robbie. CRAIG GIBSON

In 1991, Hollywood introduced to the world a young Filipino American by the name of Dante Basco through the Steven Spielberg film “Hook,” starring Robin Williams and Dustin Hoffman. The then 16-year-old Basco played the role of Rufio, the leader of the Lost Boys.

Fast forward to almost three decades and we have another Basco playing a breakout role, in her debut film feature, as Cassandra Cain in “Birds of Prey (And the Fantabulous Emancipation of One Harley Quinn).”

Meet Ella Jay Basco, the precocious 13-year-old out to steal your heart in the film that’s going to focus on Harley Quinn, the character played by Margot Robbie in the 2018 film “Suicide Squad.” Ella Jay’s dad is the eldest among the Basco Brothers.

“I feel amazing. This is definitely one of my biggest accomplishments in my acting career so I am super proud,” an excited Basco told us in an interview.

Ella Jay went through an arduous month-long audition process to get the role. To prepare, she watched a bunch of movies, practiced her martial arts skills and read some comic books about Cassandra Cain.

Finding out that she got the role was “very emotional moment and super exciting” for her.

“I mean I totally cried. I knew from that moment on, my life would change forever,” she exclaimed. “I just couldn’t wait to start.”

Her next step after finding out that she has been cast was to go out and buy a bunch of comic books, from “Birds of Prey” to Harley Quinn and Oracle.

“It definitely helped me figure out Cassandra Cain’s origin story, about how she felt and how tough she has to be in such a crazy world like Gotham.”

In fact, it was a particular storyline in a comic that initially inspired Margot Robbie (who also wears a producer hat for the film) to include the Harley/Cass relationship that ultimately plays out on screen.

“In my research, I read Harley Quinn: Behind Blue Eyes, and I knew I wanted to explore that mentor-mentee relationship,” Basco said.

“It told me a lot about who Harley was and what she was capable of. We didn’t use the exact storyline from the series, but just understanding her and her connection to Cass in that way was enlightening.”

Basco then met Robbie and the rest of the cast. The first table read, where the cast would read out the script, was unforgettable for her. She was amazed at how friendly and welcoming these big Hollywood stars were.

“They are all so sweet, such great role models for me in the industry,” she remarked.

Ella Jay thinks that she was about maybe 8 or 9 years when she committed to the career.

“I definitely remember seeing kid actors in the business and I remember telling my mom that I wanted to be in the industry and I wanted to be seen on the screen,” she recalled.

Coming from a family of performers most likely influenced her choice of career, specially seeing her uncles, including Dante and Dion, in TV shows and movies.

Despite being a newcomer, Basco is quickly making a name for herself with her dramatic acting chops and ability to perform.

She has appeared in television shows like “Veep,” “Grey’s Anatomy,” “Teachers,” “Superior Donuts,” “Happyland” and the short film “Glimpse of Heaven.” 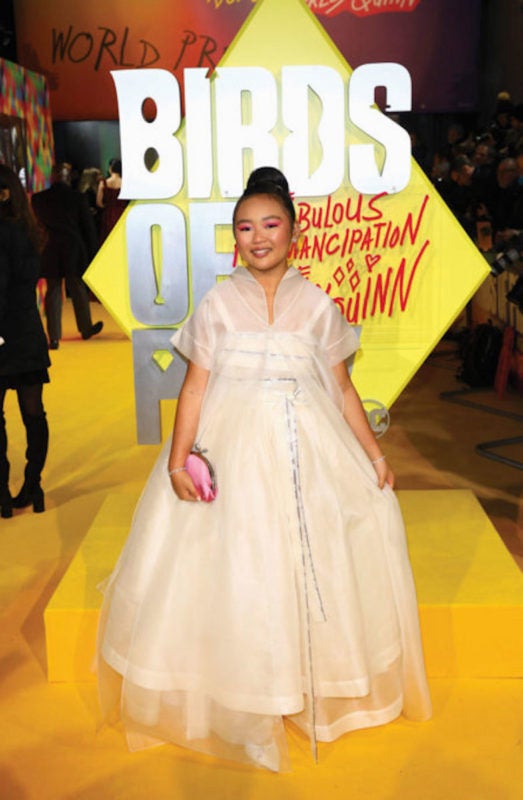 Ella Jay Basco at the world premiere of Birds of Prey (And the Fantabulous Emancipation of One Harley Quinn) in London. TIM P. WHITBY

Basco started her career at six months old in an Old Navy print campaign.  Outside of acting, Basco is a singer/songwriter and accomplished musician, playing the guitar, piano and ukulele. She is also a trained dancer.

With “Birds of Prey,” Ella Jay gets to join the DC Extended Universe.

Ella Jay’s favorite scene was the first she ever shot, which was the apartment scene with Margot.

“That was probably the best one, my favorite, because we got to know each other,” she said of her costar. “We talked a lot not just about acting, but about what we like, and our hobbies. We really opened up to each other and I really liked that.”

Due to the circumstances of the story, the young actress spent the bulk of her scenes alongside Robbie. “Margot was like a big sister to me, we had the best time with each other. She taught me so much about working with people on- and off-camera. It was amazing.”

Cassandra, at age 12, has learned to tough it out on the streets of Gotham. Cass, as she’s known, is a street urchin, a smart-mouthed kid surviving on her own—thanks in part to her uncanny knack for pickpocketing.

Cass also has a colorful vocabulary and it was a little weird watching a kid spewing those curses like a pro.

“That’s definitely something that I am never allowed to do in real life,” she said laughing. “It was interesting because as an actor you pretend and play different characters that you may or may not relate to, but definitely I am not allowed to say those words.”

Shooting the film was quite a process and it made her realize the smaller components needed to come up with a beautiful final product.

It is interesting to watch how the lives of the four women become interwoven with each other, something that was smoothly and effectively told through the storytelling process.

Kudos to the women behind the scenes: director Cathy Yan (“Dead Pigs”) and screenwriter Christina Hodson (“Bumblebee”). Yan, the first Asian woman to direct a superhero genre film, wrote and directed Dead Pigs, which won the Special Jury Prize for ensemble acting at the 2018 Sundance Film Festival. In her previous life, Yan was a reporter for the Wall Street Journal in New York, Hong Kong and China. 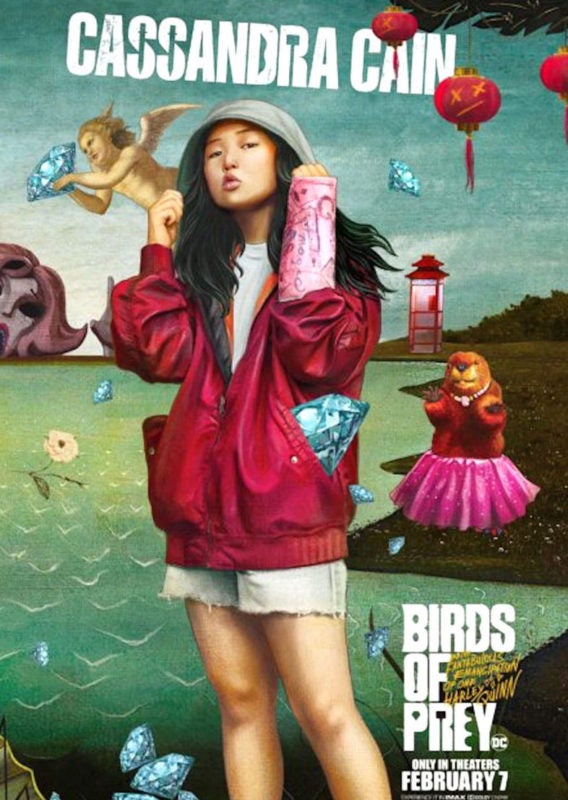 It’s all about girl power in the film, with the girl gang coming together in order to restore order in Gotham and protect Cass at all cost.

“I feel super proud and it is so cool to be a part of this girl gang, it is exciting that this is happening even,” Basco said.

“Representation is super super important. We’re kind of the minority and I think it is important for our stories to be heard,” she said.

“In being with Birds of Prey, I was able to honor my culture and I was able to represent my Filipino side in that way and that is super important because we all have a story, we all have an opinion and we all deserve to be heard and represented,” Basco added.

Basco found shooting the film as a beautiful and enriching experience. Working with Robbie and the entire cast, along with Yan, made her realize how it was to work with great mentors.

“It was honestly so exciting to work with all of them, they’re so inspiring,” she said. “Every day was a full-on learning experience, and so much fun. Everybody was super nice; it was like one long dream.”

The director had nothing but good words for the young actor as Yan admired the hard work that her youngest actress put in.

“Ella was so impressive,” she said. “This is her feature debut, so I can’t imagine how she must have felt to show up to set and work with Margot Robbie every day, but she was a total champ, incredibly mature for her age. And she really understood Cass and brought a certain authenticity to her—a real kid, not a shiny, perfect version of a little girl.”