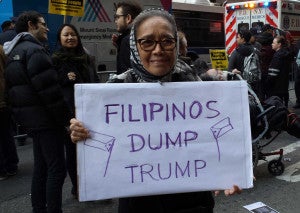 WASHINGTON, DC – Of the Trump victory, about one million of the nearly four million Filipinos in the US today are jubilant, about two million are devastated and depressed, and the rest don’t care one way or the other.

In a recent study, the National Asian American Survey (NAAS) showed that Hillary Clinton led Donald Trump with Asian American and Pacific Islander (AAPI) voters by 41 percent before the election.

Among registered Filipino voters, a majority said Clinton was their “presidential vote choice” at 54 percent.

But a quarter of Filipinos preferred Trump, the highest Trump favorability rating among all surveyed ethnic groups.
More still Democratic

Thirty-six percent of Filipinos responded that they planned to vote for Clinton, while 11 percent for Trump.

Moreover, Filipino Americans make up the group that continues a rightward lean. In 2008 to 2016, the group grew from 18 percent Republican to 25 percent. Filipino Democrats are still more numerous at 41 percent, with 31 percent saying they werer non-partisan.
So, what does this all mean now that Donald Trump is President of the United States?

Johanna Puno Hester, National President of the Asian Pacific American Labor Alliance (APALA) says she’s “deeply disappointed” because Trump does not understand AAPI communities the way Clinton does. She fears that Trump will not advocate for the inclusion of immigrants and diverse voices.

Given Trump’s hostility to undocumented immigrants, he is expected to tighten immigration laws and deport more “illegals.”
During the campaign, Trump vowed to rescind all of Obama’s executive orders, notably one that provides immigration relief to children of undocumented immigrants, called “Dreamers.” DACA benefits include acquiring a driver’s license and a work permit and applying for college scholarships.

Another program is currently stuck in the courts – it would expand deferred action to the parents of U.S.-citizen and Legal Permanent Resident children; expand DACA by removing the age cap; and allow spouses and children of green card holders to apply for a waiver so they can get a green card sooner. Even those undocumented immigrants who have a pending deportation order could apply for the programs.
Most undocumented among Asians

Filipinos have the largest undocumented population among Asians, with 143,000 living in the shadows in California. About 45,000 are potentially eligible for DACA and DAPA programs nationwide.

But if Trump discontinues these programs, they will be subject to deportation. Families will be torn apart. According to the Migration Policy Institute, however, there is always the possibility that “if enough people apply, it may be difficult for a new president to cancel the program.”

Forget about comprehensive immigration reform and fixing a broken immigration system that has visa applicants from the Philippines waiting for up to 22 years. A President Hillary Clinton would have introduced this measure in her first 100 days. But with Trump and a Republican-dominated Congress, it’s not going to happen.

Trump voters back hard line
Trump supporters, on the other hand, welcome this hard line. They consider it unfair that while many Filipinos waited for years to come to the U.S. the legal way, “out of status” visitors are allowed to jump the line.

On another immigration-related matter, Trump has suggested cutting off immigration from the Philippines, citing fears that the country poses the same national security threat as Syria and Afghanistan. “We are letting people come in from terrorist nations that shouldn’t be allowed because you can’t vet them,” Trump has warned.

Immigration rights activists have suggested that Asian American voters may be more worried about candidates’ and parties’ respect for immigrants, than about other immigration issues. Trump’s hostility to diversity, in which immigration plays a role, only reinforces their sense of being unwelcome.