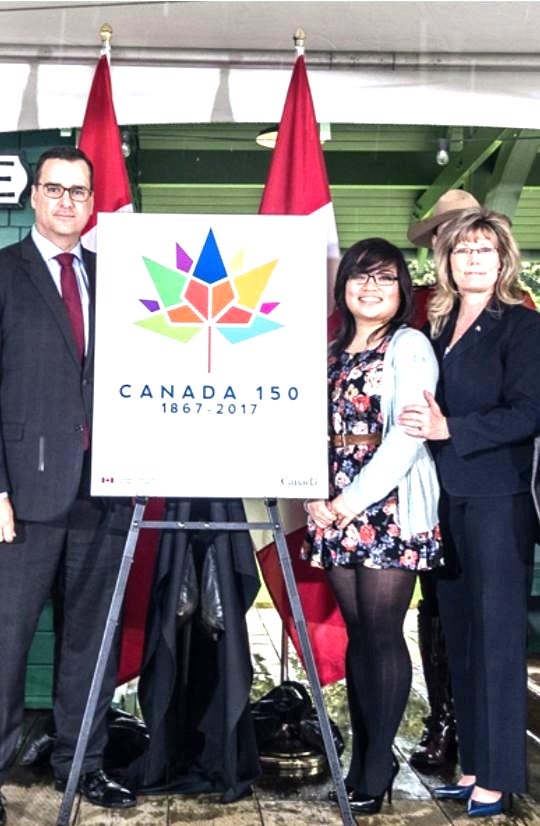 Cuvin, a former global business and digital arts major at the University of Waterloo in Ontario won $5,000 for her work.

The logo is stamped on all government products related to Canada’s 150th birthday. Cuvin’s design can be seen in T-shirts, leaflets, posters, caps, flags, mugs, refrigerator magnets and commemorative coins.

In an interview posted on YouTube, Cuvin said, “When I found out about the contest, I was very excited because it was an opportunity that I wouldn’t otherwise get as a student and I thought that I might as well give it a shot.”

She explained, “When I started thinking about the logo, I knew I wanted to create something simple, something that would be easily recognizable and I wanted to leave enough room so that whoever was building the visual identity for Canada 150 would have enough room to play and create their own design.

“The four diamonds that are attached to the stem in the maple leaf are meant to represent the four provinces that were part of the Confederation in 1867. As we approach the 150th Anniversary of Confederation, I’m excited to see what the future holds for Canada and what the next chapter is going to be like.”

Ariana Mari Cuvin created this logo for the 150th anniversary of Canada. WIKIPEDIA

Shelly Glover, former Minister of Canadian Heritage and Official Languages predicted that the logo would become “a unifying symbol of the Canada 150 movement, a lasting reminder of our proudest moments along the journey.”

Cuvin emigrated from Hong Kong in 2002

with her family when she was seven years old. She was a graduate of the Father John Redmond Catholic Secondary School and Regional Arts Centre in Toronto, and received the Filipino Centre of Toronto outstanding student award.