Rob and Winnie Cavestany have a routine when he goes on tour.  CONTRIBUTED

When the heavy metal band Death Angel performs in Manila on May 16, Filipinos will witness the brand of “thrash rock” that has wowed fans for nearly 40 years.

They’ll feel the thrill arising from “Humanicide,” the album that earned the band its first-ever Grammy nomination, in this year’s awards.  “Dropped,” industry term for launched, last May, the album title evokes doomsday but in reality comes from and aims to take listeners to a kinder place, says its co-songwriter and co-producer Rob Cavestany, the band’s founder and lead vocalist.

“Let it be known that we are a very, very, positive and positive spirit and energy kind of people and band,” Cavestany explained the origin of their latest work to Grammy.com.  “All the dark topics and brutal things happening in our lyrics or in our concepts are meant as a message or warning; a wake-up call kind of thing. We’re not saying it (humans killing humans) should happen, but it’s where we’re going if we continue like this, so we need to do something about it, so that kind of thing does not happen.”

Cavestany, his cousin and lead vocalist/co-songwriter Mark Osegueda and rhythm guitarist Ted Aguilar – all Fil-Ams – bassist Damien Sisson, drummer Will Carroll and other nominees descended Jan. 26 on Staples Center in Los Angeles at a time when charges of scant representation and other controversies, plus the helicopter crash that killed 9 people including NBA icon Kobe Bryant, his daughter Gianna and Fil-Am basketball coach Christina Mauser, threatened to mar the recording academy’s most important night.  But host Alicia Keys, Cavestany’s longtime crush, managed to soothe tension and performances dazzled beholders.

The Best Metal Performance prize may have gone to Tool for “7empest,” but Death Angel got the biggest boost they could wish for with the recording academy nod. 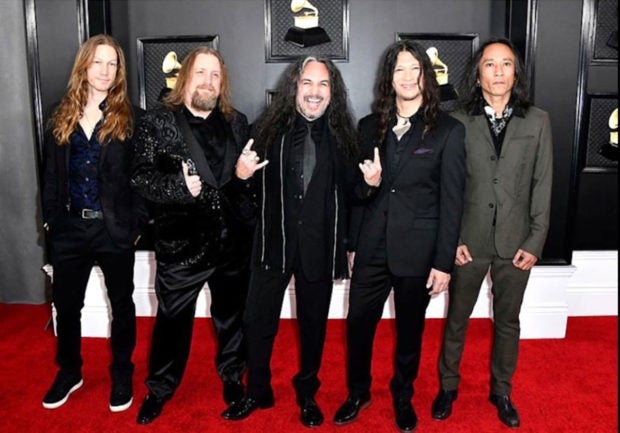 “This is the highest high and the best push forward” since they were first signed by a major label, Cavestany said.  “This is a culmination of almost four decades of giving up my whole life to music and goddamn if we’re not going to enjoy the hell out of it!”

And they did, trading their signature leather togs for what comes closest to coordinated formals in the counter culture for the de rigueur tread on the red carpet.

“The highlight of the Grammy’s ceremony for me was many of the amazing speeches given by such a diverse collection of incredible musicians.  Different genres yet similar messages.  Unity and powerful positive energy shared through music,” Cavestany told INQUIRER.NET. “That and hearing and seeing our band name and song title in front of all the nominees and legendary artists in that epic venue!”

Death Angel rocked the event like kids at a toy store.

Winnie Galeon Cavestany knows what’s beneath the shaggy mane, the intricate body ink and menacing looks of a heavy metal rock band, having nurtured Death Angel even before her son and his cousins had decided to borrow the name of a book at a store in Serramonte Center in 1982.

“I’ve never seen them dressed like that before,” she told INQUIRER.net days after the Grammys.

The retired bank executive living in San Ramon, California, was the proudest to hear last of Death Angel’s first-ever Grammy nod and most disappointed when they did not get the plum.

In January she was Rob’s special guest when the local Grammys honored Bay Area nominees including Fil-Am R&B star H.E.R. at The Chapel, a converted house of worship now a shrine to live music acts.

Every Christmas she and her first cousin Carol Williamson-Osegueda get tickets to the band’s traditional holiday gig at Slim’s, the famous San Francisco watering hole for rockers.  Mothering the band’s leaders does have its privileges. 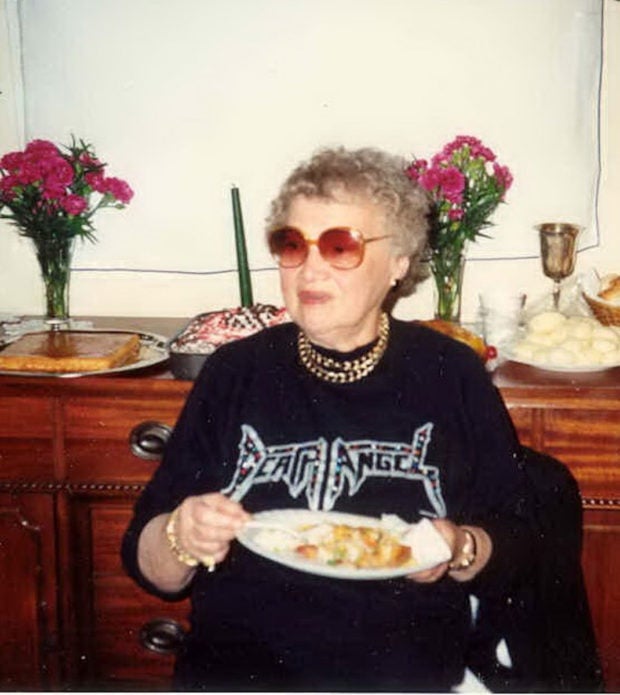 Winnie called the Grammy nod “much deserved and long overdue.”  She and her cousin Lita Pepa, mother of former member Dennis Pepa, who took their sons to Cow Palace in the late ‘70s for a KISS concert, the show that sealed the future of her only child.  While Gene Simmons’ band revs for their “final tour” today, their Daly City-bred disciples are just about to peak.

Rob, 51, was born in San Francisco to Winnie and her husband Bob Cavestany, who came to the United States from San Juan (now City), a suburb in Manila in 1967.  They settled down in Daly City where Winnie’s brother George Williamson Galeon and his wife Erlinda also lived.  Their cousins Carol W. Osegueda and Lita Pepa lived in nearby cities.  Their sons were around the same age and all drawn to rock.

Rob took some guitar lessons but was pretty much self-taught, says his mother.  In school he was a standout: “From the beginning, his teachers recognized his aptitude and placed him in the mentally gifted class.”

Seeking refuge from Daly City weather, the Cavestanys moved across the Bay to Concord.  The Oseguedas also uprooted from Pacifica and resettled on the East Bay.  Distance did little to douse the boys’ passion to perform as a group.

“By Friday Rob would take BART (Bay Area Rapid Transit) to Daly City and stay at the home of my brother George.  He and his cousins practiced the whole weekend at the basement next to the in-law (self-contained living area) where my mother Elma Williamson Galeon lived,” Winne recounted to INQUIRER.NET.

Rock is an acquired taste.  Heavy metal is even more esoteric, but their elders enjoyed and encouraged the budding band.

“Every time there was a family gathering, we would go to the garage and watch them perform.  Then we would pass the hat and give the money to the band,” Winnie recalls.  “Those concerts were an enjoyable part of our get-togethers.”

Winnie admits to spoiling Rob, which was easy because of he never gave his parents trouble.

“He was not at all bratty.  He was very passionate about music; all he ever wanted to be in the life was to play his music.”

Her husband was the band’s first roadie, she said with a laugh.  The senior programming analyst with the now-defunct Crocker Bank would drive back and forth across the San Francisco-Oakland Bay Bridge whenever the band had a concert in The City.

After graduating from Concord’s Clayton Valley High School, Rob concentrated on his music. College was the tour circuit.  Rock became his career.

In 38 years, Death Angel has seen epic highs and lows.  They were signed by Geffen in 1989 and cut their album “Act III.”  They hit the road for the album in 1990, when their bus crashed in Arizona and severely injured their drummer, Rob’s cousin Andy Galeon.  Galeon was a founding member along with Dennis Pepa and Gus Pepa, two other Fil–Am cousins. 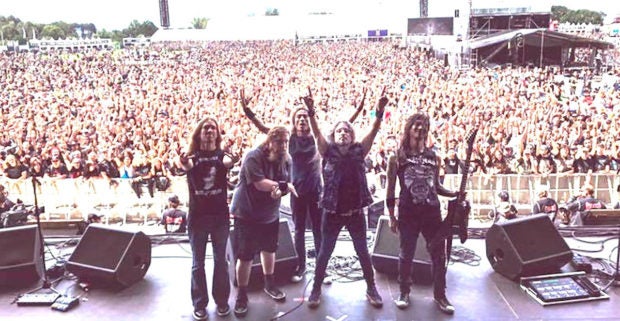 The accident couldn’t have happened at the worst time.  The band was set to open the 1991 Clash of the Titans tour top-billing their comrades Megadeth, Slayer and Anthrax.  Instead they were dropped from the line up and then lost their contract with the label because, says Rob, they couldn’t replace their drummer in time.

The experience split up the band’s original members.

“They didn’t want to perform without Andy,” says Winnie.  That was the only time Rob, by then 30, husband to Monique Texeira and father to their son Aiden, worked outside his milieu.

“For a while he was a runner at an Oakland law office, not a clerical job” Winnie shared.  “Eventually the lawyers learned he had a rock band and started asking him questions.  One lawyer even asked for guitar lessons.”

Rockers being married to their music, the guys couldn’t resist the lure of performing when they got together 10 years later for a benefit for their ailing friend, Testament lead vocalist Chuck Billy.  That 2001 reunion ignited the band’s return until Galeon bowed out in 2009.

The band survived the breakup along with “lawsuits and musical shifts” through its “incredible perseverance,” it proclaims on its website.

“Humanicide” marks a milestone in their journey.

“We ramped up everything — our work ethic, our whole strategy. We kind of had to clean house. We had a different booking agent; we got a new management team—and we’re self-managed now, basically,” says Rob, far more business savvy by this time.  “Within the band, we’ve defined each person’s strong points and their forte and what we handle between me and Mark and Ted.” 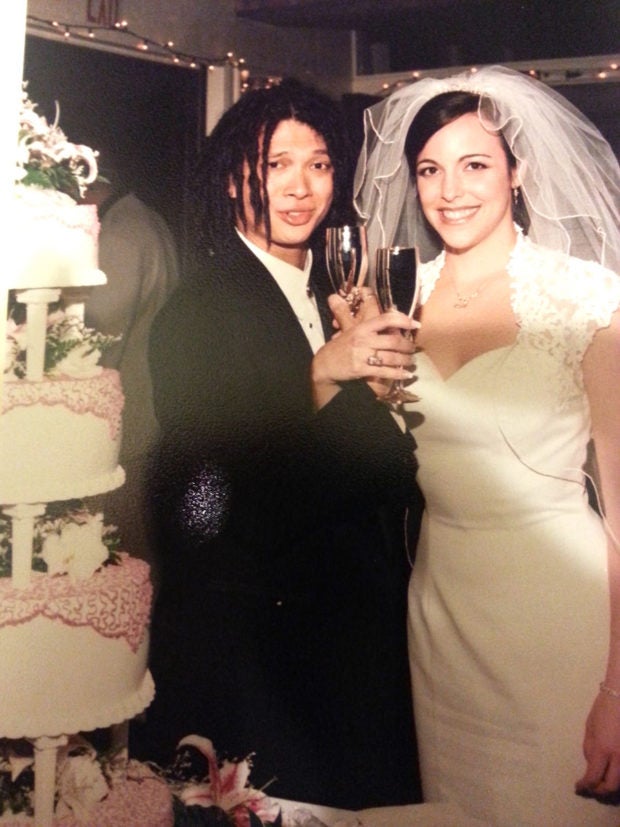 Rob and wife Monique (left) have a son, Aiden, 15, St. Mary’s HS student who like to drum. CONTRIBUTED

Ted’s wife, Tricia Aguilar, handles marketing and promotion.  Mom Winnie is the band accountant, “a most trustworthy volunteer,” said the former AVP –Controller of Crocker Investment Corporation, a subsidiary of the same company where her husband worked.

Rockers are reputed to have a raucous lifestyle extending from their stage persona.  Only their loved ones know the kindness that lies beneath.

“Every time he goes abroad, he makes sure to bring me a souvenir,” Winnie revealed.  “He knows I love Elvis, and you should see my Elvis memorabilia from him.”

Since Bob Cavestany has been collecting posters of the band’s concerts around the world, their garage is like a museum tracing Death Angel’s evolution.  A lucky repair crew chanced upon the hidden treasure and asked Bob if he was a heavy metal head.  They went crazy when they found out whose father he was and asked to take selfies with him.  They left with a concert button, compliments of Winnie.

No matter their schedule, Rob and Winnie have a routine going to this day.

“Before his plane takes off, sends me a text, saying they’re about to go and I drop everything to say a little prayer.  The moment his plane lands, he texts to say they’ve arrived; again I say prayer, this time of gratitude.”

The custom will recur on Feb. 6 when Death Angel begins their tour in Copenhagen and on through northern and western Europe until March.  And on and on, if Cavestany can help it.

“Musicians are basically in it for life, by the law of nature,” he replied to Inquirer.net’s question about retirement.  “However, there could obviously be reasons why one must stop.  Some won’t but should!  Haha.  Some do but keep coming back!  Hahahaha!  I pray I never stop.”