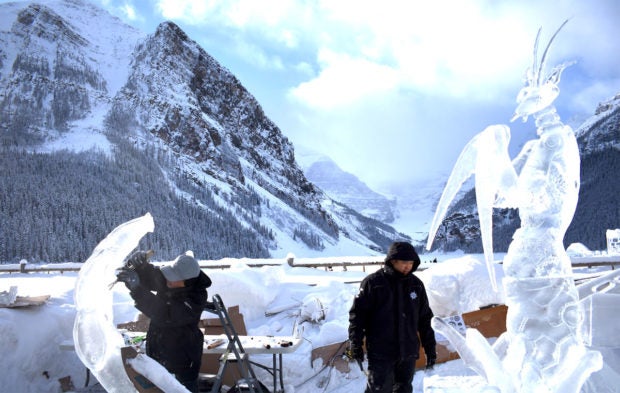 LAKE LOUISE, Alberta – The minus 36-degree Celsius temperature did not hinder a team of Filipino brothers from finishing their winning entry in the 26th International Ice Carving Competition here.

Representing the Philippines, the Baisas brothers battled the frigid temperature along with nine other teams to complete their entry after 32 hours of grueling work in the outdoors. 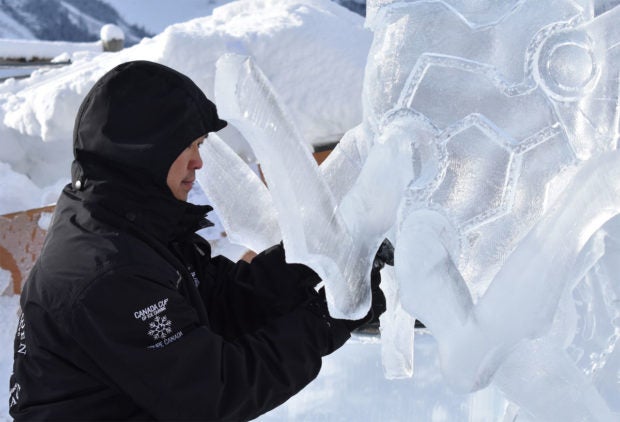 “In minus thirty degrees we couldn’t do much, we couldn’t put water on the ice as it becomes brittle,” said Ross Baisas, the youngers of the two. Despite the cold, the brothers finished their masterpiece entitled “Steampunk Rivalry,” working mostly with frozen gloves, and icicles lining their eyelashes.

The brothers won 5th place, while Ross Baisas’ entry for the one block speed competition won second prize and was also the people’s choice award.

“I had initial training in wood carving with my father as a teenager,” he said. His learned through the years mostly by observing and being self-taught, he added.

“Art is my passion since I was young. I drew a lot,” he said. Year after year, Ross improved on sketching animals, portraits, landscapes, anatomy and proportion.

Ross also nurtured his skill by developing three dimensional sketches, an idea that would later transform mediums such chocolate, butter, fruit or vegetables and later, ice into carvings.

“There is a lot more that you can do with ice,” he said. What is striking about ice is it reflects the light of any color, he added.

Starting from only a block of ice, Ross started competing in the one block category beginning in 1996. The venture became bigger once the brothers migrated to Canada using up to 18 blocks of ice to compete.

Antonio Baisas lives in Ottawa, Ontario and started competing in the 1990s.

“Steampunk Rivalry,” the brothers’ entry to this year’s ice carving competition set at the scenic Lake Louise, in Banff, is a sculpture of a mantis and a scorpion amid a battle. The piece features designs composed of screws, wheels, nuts and bolts which made up the animals’ body parts.

Ross said the difficult part of the sculpture was the 12 legs and 4 arms with details so intricate it was nearly impossible to achieve on a transparent ice.

The brothers drew inspiration from gear spare parts. “I always want to throw new ideas and possibilities. Sometimes they appreciate it, or sometimes not much, but whatever the result in the end, we are happy and proud specially bringing our country with us,” Ross added.

The 10 teams were given only 14 hours for two days, and 6 hours on the last day to finish transforming 15 blocks of ice into elaborate masterpieces.

The brothers were fresh from winning the top prizes in the Ice Festival in Poznan, Poland in December, 2019.

Ross and Antonio came in first and second prize, respectively in the solo category. The brothers took the top prize in the team category, besting 11 other teams from Mexico, Spain, Malaysia, Canada and USA.

Last year, the brothers also brought home the top prize during the Snow Festival in Banff, Alberta, with their entry entitled, “Tangled.” 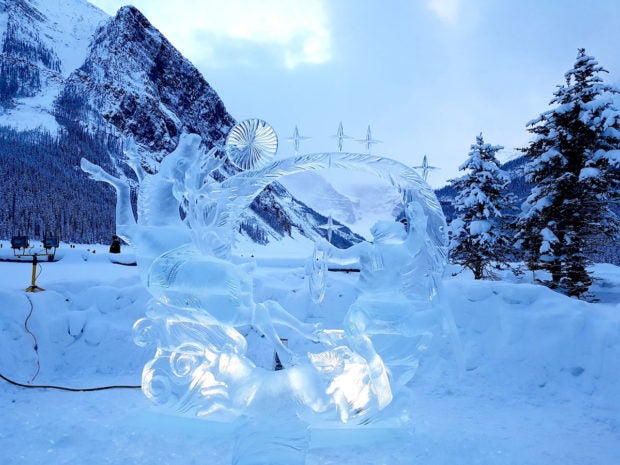 “Ice and snow competition is part of our winter hobby and has become our passion,” said Ross. The brothers compete about five times a year in the winter.

The brothers are preparing to join the ice carving competition in the Winterlude, Ottawa’s winter celebration from January 31 to February 17.

Ross works as a kitchen artist at Casino de Montreal, in Quebec province. He migrated in May 2002 from the Philippines and worked as cuisine decorator.