Greta in the Temple of Commerce

Greta in the Temple of Commerce 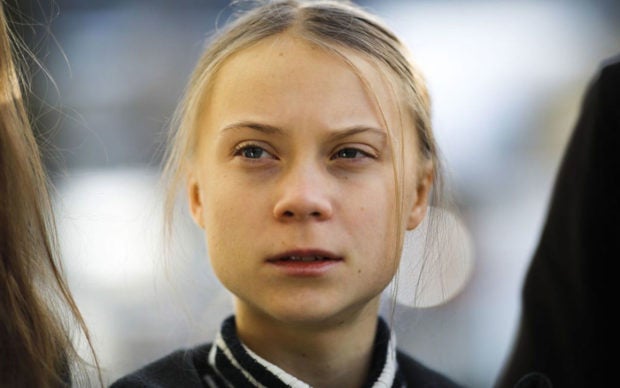 NEW YORK — Out of the mouths of babes comes the truth.

Out of the mouths of men come falsehoods.

At the recent World Economic Forum in Davos, Switzerland, 17-year-old climate-change activist Greta Thunberg, along with other activists, urged business titans “to halt all investments in fossil fuel exploration and extraction” as well as “immediately and completely divest from fossil fuels.”

In response, US Treasury Secretary Steve Mnuchin patronized Thunberg by saying, “After she goes and studies economics in college, she can come back and explain that to us.” Presumably, older, more experienced adults such as he are infinitely wiser. You could hear the harrumph in his voice: what would a teener like her or any of the young climate activists know about the world? Leave the business of running the planet to experienced men like us, girl!

This is as smart as telling someone who is sounding the alarm that one’s house is on fire to first get a degree in firefighting before taking any action in putting the fire out.

To paraphrase a campaign slogan from the 1992 presidential campaign of Bill Clinton, “It’s about the planet, stupid!”

Unless and until another planet is found that will sustain humanity (possible, of course, but not yet on the horizon), Earth remains our only home. It’s clear to everyone, except the latter-day Neros who fiddle around, encased in a bubble with their trust funds and their stocks, while the world burns, that we must do everything we can to make sure Earth continues to be livable, that the crisis that faces us right now—the crisis of environmental meltdown—needs to be dealt with immediately. No ifs, no buts.

Mnuchin’s, and Trump’s, refusal to consider the compelling argument behind the Swedish teenager’s activism, and by extension, the existential worries a great majority of us harbor concerning the planet’s very existence, and thus, ours as well, is appallingly short-sighted and should in fact be seen as criminally negligent.

The US withdrawal from the Paris climate accord, the continuing deregulation under the current EPA that encourages heedless exploitation of natural resources, and Trump’s pigheaded insistence on climate change as a hoax: these are all life-threatening. One need only point to the fires in the Amazon, and more recently, to brush-fire holocaust in Australia that has consumed an area larger than Belgium and resulted in so far 20 lives lost and half a billion animal deaths.

Mnuchin and Trump may be willfully disregarding the signs, but apparently financial institutions are sitting up and taking notice. They realize that climate change will undoubtedly cut into their profit margins and are thereby taking some steps to address environmental concerns while still making money. Perhaps it is Mnuchin and Trump who need to take courses in environmental economics—though this is unlikely to happen in Trump’s case, knowing the man is seriously challenged by anything in print.

The activists’ desire to rid ourselves of this unhealthy addiction with the profit margin reminds me of the Gospel account wherein Jesus Christ enters a temple in Jerusalem and sees how the house of worship has become a site of commerce. Infuriated and with whip in hand, he knocks over the tables of the money changers and drives them from the temple. He accuses them of desecration, of making the temple into “a den of robbers.”

Interestingly, Christ does this just four days before his crucifixion. Though the Gospel does not tell us who were in the crowd that demanded his blood when Pontius Pilate appears before them, among those present, I am certain, were the very same money changers Christ chased out.

In a much earlier episode, at the age of 12, Jesus spends time in the temple, once again in Jerusalem, once again at the time of the Passover, holding court with the rabbis, raising and answering questions, with a wisdom beyond his years that astonished all those listening. The Gospel doesn’t say whether some listeners felt the child didn’t really know what he was talking about.

I am reminded as well of 15th-century Jeanne D’Arc, “the Maid of Orleans,” an unlearned farm girl who at the age of 17 led the French forces to victory over the English, the same age as Thunberg. Her precocious heroism cost her her life, unfortunately. That won’t happen with Greta.

What will surely happen is if we don’t heed the clear and present dangers she and all the young activists keep pointing to, this mothership we call home, with its inestimable beauty, “charged with the grandeur of God” as the English poet and Jesuit Gerard Manley Hopkins once wrote, with its “weeds and wilderness,” will be irrevocably changed for the worse, and even disappear. Copyright L.H. Francia 2020