Duterte pretends to stand up to a superpower 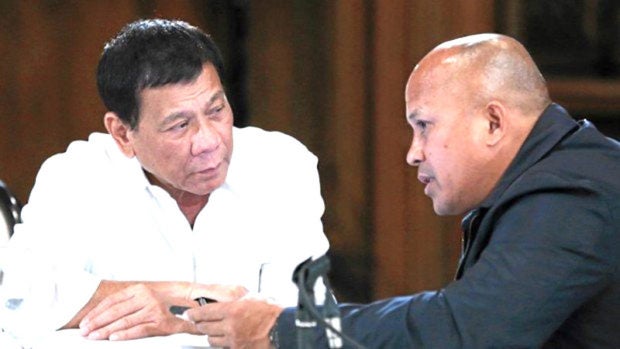 President Duterte threatened to cancel the Visiting Forces Agreement with the US. INQUIRER FILE

There are countless reasons for Filipinos to be pissed off at the United States, and for a Philippine president to call out America for its many offenses against the country.

But one thing is certain — Bato dela Rosa losing his US visa isn’t one of them.

But then again we’re talking about Duterte who warned the US that he would repeal the Visiting Forces Agreement if the US did not reverse the decision on Bato’s visa.

These are really  weird times.

Finally, a Philippine president appears to be standing up to the country’s former colonial master, the superpower with whom Filipinos have had  a bittersweet love-hate relationship for more than  a century. The list of American offenses is certainly long: from waging a 19th century invasion that left hundreds of thousands of Filipinos dead to embracing the corrupt dictatorship of Ferdinand Marcos.

But there’s a twist — the president pretending to stand up to Uncle Sam  is known as a notorious thug who inspired mass slaughter, denigrates women, poor Filipinos and anyone who criticizes his regime, who has repeatedly told soldiers defending the country that it’s okay to rape and abuse civilians.

If only Duterte would direct all that fiery anti-US energy at more noteworthy targets.

He could start with the brazen attacks on immigrants, including Filipinos under Trump. The anti-immigrant wave has even targeted a group that spent more than 50 years fighting for and winning the rights and benefits promised to them during the Second World War:  the Filipino World War II veterans.

Last year, the Trump administration moved to end family-based reunification programs meant to help Haitians and Filipino World War II veterans. It was a US senator from Hawaii, Mazie Hirono, who offered the strongest condemnation of what many agree is a cruel move.

“To serve his pathological need to treat immigrants as cruelly as possible, and to undo any program ever created by Barack Obama, Donald Trump is dishonoring Filipino World War II veterans by ending the program that allows them to reunite their families in the United States,” Hirono said in a statement. “The President’s decision means many of these veterans in their 90s will likely die without seeing their families again.”

This is where Duterte should direct his fire, his foul-mouthed attacks at Washington.

It actually would have made more sense — and he probably would have won praise — if it is in reaction to this move that he unleashed this crude tirade: “Kapag hindi ninyo ginawa ang correction diyan: I will terminate the Visiting Forces Agreement. Tapusin ko ‘yan putang iyan.”

Because yes, for many of us, the Visiting Forces Agreement, is actually another legacy of the Philippines’ tragic, one-sided relationship with the US that should have been rejected in the first place.

But then again,  Duterte is clearly not really interested in fair and equal bilateral relations with superpowers.

One the best posts reacting to Duterte’s outburst over Dela Rosa’s visa woes recalls how when a Chinese ship rammed a Filipino fishing vessel nearly killing 22 fishermen and when the Chinese military started building structures in Philippine territory, Duterte’s reaction went something like, ‘What can we do? We’re no match against Beijing.’

But it’s a different story when Uncle Sam revoked the visa of the Duterte ally who helped wage his bloody campaign.

That was naturally a bigger outrage for Duterte — and a perfect opportunity to pretend once again to be a tough guy willing to stand up to a superpower.