Dark clouds over the US and PH 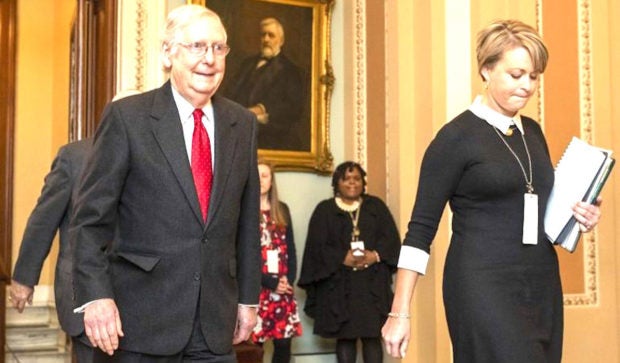 When Taal erupted more than a week ago, my non-Filipino friends in the U.S. were all agog by the size of the smoky spew from the suddenly active volcano.

The front page of the Wall Street Journal showed a man in a small boat dwarfed by the volcanic cloud that went up nine miles high.

Isn’t that like it is with life in the U.S. today, metaphorically speaking?

We have our own cloud.  And mostly it’s because of Donald J. Trump, TIP, for “the impeached president,” my designation for the man who should be removed from office.

As the impeachment trial starts up, Trump and his cronies are doing all they can to make sure he gets out of this ashen mess dust free. As the president tries to look presidential in Davos, Senate Republicans are trying to prop him up like capitalism’s dummy. They’re limiting debate, witnesses, and justice.

Just trying to make the cloud work for them.

Makes it ironic that all this comes on the same week we celebrate Dr. Martin Luther King Jr., a man who is the symbol of everything Trump isn’t.

If King was the awakening to the dream, Trump represents a return to the somnambulant past. The dark days for people of color. This is the president who sees Nazi tiki torches in Charlottesville and says there’s “good people on both sides.” From civil rights to voting rights, Trump as the leader remains the biggest threat to U.S. civil rights in the last half-century.

Trump sees people of color and wants to limit travel and border entry, not just immigration. He’s for limiting that too. He’s promised his base he’s going to build a wall. And forget the refugees. Let them rot in ICE detention facilities. Separate them from their children. He’s only interested in letting the “good ones” in. Not the poor or the persecuted. And not even the good ones in college. What’s he doing about DACA? Nothing. He’s against affirmative action. He has one of the least diverse administrations in history.

The legacy is clear. Donald Trump is the anti-MLK.

And now after being impeached by the House, the Senate can remove him for good. Not for the policies he’s foisted on our country, but for his actions that defy the Constitution.

But it only happens if the U.S. Senate is truly interested in justice and fairness and not what the Democrats describe as a “coverup.”

What else would you call it if new testimony from witnesses isn’t allowed? Witness like Lev Parnas, the Pro-Russian Ukrainian buddy of Giuliani who saw Trump as the way to undermine reform efforts in his  homeland.

Trump knew everything, says Parnas. But is the indicted Parnas singing for his life? Doesn’t matter. He’s in the dirt with the impeached president. Parnas needs to be heard.

So should other witnesses, like Mick Mulvaney, Trump’s chief of staff, and the former Secretary of State John Bolton, who referred to the Giuliani-led initiatives as a “drug deal.”

An impartial jury should want to hear from these witnesses and others.

But we don’t have an impartial jury in the Senate. We have Sen. Mitch McConnell, who has already stated publicly that he’s working in concert with the president. We have Sen. Ted Cruz saying that what the impeached president did was no worse than a traffic ticket.

Obstruction of Congress? Abuse of Power—for withholding hundreds of millions in aid? The Republicans laugh.

And they ignore even the findings of the objective Government Accounting Office, which found that Trump withholding military to aid to Ukraine was a violation of law.

This is a report from the GAO, once considered the gold standard of truth. Now looked on with suspicion as an arm of the “deep state.”

This is where we are in America the week we celebrate MLK day. Everything is polarized. Everyone distrusts everyone. You only trust what you know. And that isn’t much.

If you’re white and powerful, you are above it all. And as the president likes to say, you can pretty much get away with murder (unless that mythical person on 5th Ave. Trump likes to shoot rhetorically only suffers a flesh wound).

“Getting away with it” is the Trumpian value.

If no witnesses are allowed, then that becomes the new motto for our democracy, and it replaces what we have long prided ourselves in America.

Rule of law? The right thing?

It’s a free market justice system. Can you get away with it? Right on! Just rig the rules so no documents or witnesses are allowed. Without that, it’s just like a volcanic cloud. Hot air.

And if it succeeds, we’ll see the real trickle down in action. A lack of respect for anything in America. And it starts when you see the legit people acting illegitimately.

When the real “bad guys” start winning, how is that supposed to make the rest of us feel?

Whenever I’ve covered the local courts, I can’t get over how it’s a step away from the jail. The defendants paraded through are mostly people of color. And the process seems rigged. The law is read to the letter.

There is no leeway. In the cases I’ve covered, nothing is reduced to a traffic ticket. It is a hard-ass justice system—if you’re powerless or the wrong color.

But a white president who is above it all can do as he pleases. That’s the thing that fosters resentment. It’s the reason Americans revolted against the King in the first place.

I think of all the men and women below Trump, n more unfortunate circumstances. Sure, there are lucky ones who catch a break and have advocates who reveal new evidence, like DNA tests that can often set them free.

And then there are the others too poor for a decent defense and just end up paying the price. Their crime? They got caught in the system with no way out.

That’s not happening to people who pride themselves with “getting away with it.”

A president shouldn’t be allowed to “get away” with anything. But this week he might.

On this week, if we all think about MLK and can get beyond the platitudes, maybe the Senate will find a way to do the right thing. At least allow witnesses and documents so the trial is fair an impartial.

At this point, I am just not that hopeful.

Our cloud, the Philippines’ cloud

Meanwhile, a real cloud of ash remains over the Philippines, which doesn’t seem to know what to do about Taal.  More than 13,000 people have been evacuated. But they forgot the other animals.

Hundreds upon hundreds have been left behind.  And the Philippine government has no plans to do anything about it. That should be a crime.

I talked to Jason Baker, Sr. VP of PETA Asia in Manila, and he said about a dozen PETA volunteers are the only ones in Taal trying to help get animals out. So far a few hundred have been saved. And each day they are saving as many as they can get on PETA’s small boats.

The rest are being left to die. Shame on the Philippines.

My new one-man play, “Emil Amok: Married to PETA and other Love Stories,” will run Feb. 1 and 6th at San Francisco’s Potrero Stage. It’s a vegan comedy where I talk about animal rights, Filipino rights, and why you shouldn’t drive cross country with a cat.  For tickets check out:  https://playground-sf.org/solofest.

Emil Guillermo is a veteran journalist and commentator who writes a column for the Inquirer.net.