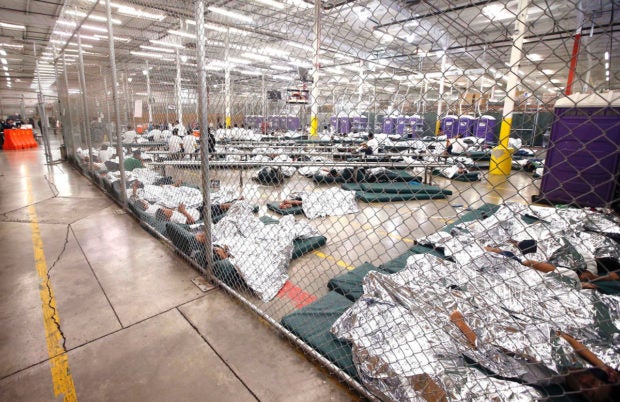 The US Border Patrol is being sued for the conditions in its migrant detention centers in the Tucson, Arizona area. AP PHOTO

TUCSON, Arizona —The trial in a legal challenge to the allegedly horrific conditions in U.S. Border Patrol’s short-term detention facilities in the Tucson area began Monday, January 13 at the U.S. District Court in Tucson, Arizona.

Filed in June 2015 by immigration groups, the lawsuit, Doe v. Wolf (formerly known as Doe v. Kelly), followed months of investigation and interviews with detainees that revealed “unconstitutional conditions” in detention facilities used by Border Patrol in the Tucson sector.

Migrant men and women described appalling conditions including being detained in very cold, overcrowded, and filthy cells for extended periods of time, without access to beds, soap, showers, adequate meals and water, or medical care, in violation of constitutional standards and Border Patrol’s own policies.

The lawsuit was filed by the American Immigration Council, ACLU of Arizona, the National Immigration Law Center, the Lawyers’ Committee for Civil Rights of the San Francisco Bay Area, and Morrison & Foerster LLP.

“For over four years, we have been gathering evidence of the substandard conditions to which thousands of individuals have been subjected,” said Mary Kenney, directing attorney of litigation with the American Immigration Council. “We are looking forward to presenting this evidence to the judge and are seeking a permanent solution to these unconstitutional conditions.”

Alessandra Navidad, executive director for the ACLU of Arizona, said, “The criminalization of migrants, unconstitutional asylum policies and increase in the use of detention have only exacerbated the situation. It’s past time Border Patrol be subject to greater accountability and oversight.”

“Our own government’s treatment of migrants should shock everyone’s conscience,” said Alvaro Huerta, staff attorney at the National Immigration Law Center. “People — including pregnant women and young children — are fleeing violence only to be detained in the United States under conditions that put their health and safety at risk. This isn’t just about toothbrushes or blankets. The absence of these basic necessities illustrates larger, longstanding problems within Border Patrol that have only intensified by this administration’s inhumane and harmful immigration policies. We are better than this. We must demand that our government treat people under its care with the dignity and respect that all human beings deserve.”

“Border Patrol detains some of the most vulnerable people in the world, including migrants fleeing horrific violence and persecution, under deplorable conditions,” said Bree Bernwanger, senior staff attorney at the Lawyers’ Committee for Civil Rights of the San Francisco Bay Area.

“Regardless of who is held in its custody, the constitution requires that the agency, at a minimum, provide for their basic human needs. We hope this case will ensure that in the future, Border Patrol upholds its constitutional duty to ensure that migrants in its custody are not punished simply for being migrants,” Bernwanger added.

The trial is expected to last nine days. Plaintiffs hope that the process will result in increased protections for people detained in Border Patrol facilities and permanently require the agency to comply with its constitutional obligations.