What’s in store for Filipino officials on the US travel ban?

What’s in store for Filipino officials on the US travel ban? 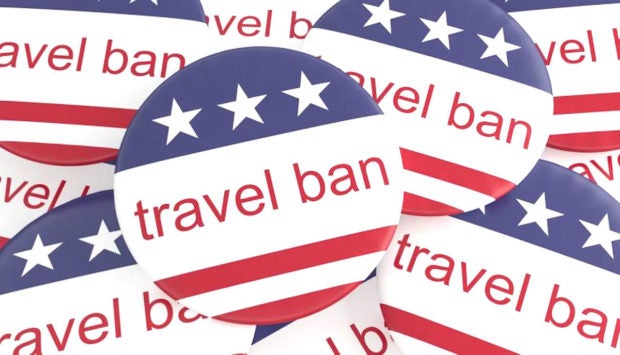 On December 20, 2019, President Trump signed a budget law known as the “Further Consolidated Appropriations Act of 2020” (Public Law 116-94), which includes a U.S. travel ban of individuals identified to have violated human rights. This provision implements the Global Magnitsky Act, which comprises significant steps that the U.S. other countries may take to protect and promote human rights and combat corruption around the world.

To expound further on the congressional intent, Senate passed S.Res 142 on January 8, 2020, “A resolution condemning the Government of the Philippines for its continued detention of Senator Leila De Lima, calling for her immediate release, and for other purposes.” Among the provisions of the resolution is the call to apply the sanctions of the Global Magnitsky Act to Philippine government officials responsible for the arrest and prolonged detention of Senator De Lima. Until resolutions are incorporated into a bill that becomes law, a resolution merely expresses the opinion of the Senate. They have no force of law.

But with the Committee Report and now the S. Res 142, it is more likely the sanctions of  the Global Magnitsky Act will apply to government officials of the Philippines responsible for the arrest and detention of Senator De Lima. And if they apply, what is next?

Within 30 days from the date of the signing of the Consolidated Appropriations Act of 2020, the names of individuals that are included in the sanctions of the Global Magnitsky Act, which includes a ban from entering the United States, will be reported to the U.S. Congress and posted on the State Department website. This means those on the list will have visa applications denied, or be refused entry even if they have prior issued visas.

There will be no arbitrary process for inclusion in the travel ban list. The State Department should have “credible” information that government officials are involved in human rights violations or in the arrest and detention of Senator De Lima. The agency that decides who will be on the travel ban list is the Department of State. Assuming a government official and his/her family members are on the list, will this travel ban be a permanent bar?

Unless the grounds for denial of visas are based on espionage, sabotage or attempt to overthrow the U.S. government, most grounds of inadmissibility are subject to waivers. These include prior criminal convictions, public charge grounds, misrepresentation, fraud and prior removal. And if waivers are approved, the visa applicant may be approved for the visa allowing entry to the United States.

The same waiver may apply to those subject to the travel ban under the Global Magnitsky Act. The budget law specifically mentions that the Secretary of State, “may waive the application of paragraph (1) if the Secretary determines that the waiver would serve a compelling national interest or that the circumstances which caused the individual to be ineligible have changed sufficiently.” So if there is a compelling national interest or,  if the circumstances have changed, the travel ban will be lifted and visas may be issued again.

Since this will affect mostly government officials, there is also an exception to the application of the sanctions. The budget law states that the ban will not apply if the entry to the U.S. would further U.S. law enforcement objectives or is necessary to permit the U.S. to fulfill its obligations under the United Nations Headquarters Agreement and as long as it will not derogate U.S. obligations under applicable international organizations.

Given the above provisions, we can conclude that the travel bans are not absolute. To propose counter sanctions by requiring Philippines visas to U.S. citizens, including former Filipino citizens who are not dual citizens, is certainly among the prerogatives of the Philippine government.

However, it is fair to ask if doing so is beneficial to Philippine interests, considering that the majority of U.S. citizen travelers to the Philippines would most likely be former Filipino citizens and/or U.S. citizen investors.

(Atty. Lourdes Santos Tancinco,  is an immigrant advocate, founder and a principal partner at the Tancinco Law Offices, San Francisco CA based law firm. She may be reached at 1 888 930 0808, [email protected] , facebook.com/tancincolaw, or through www.tancinco.com)