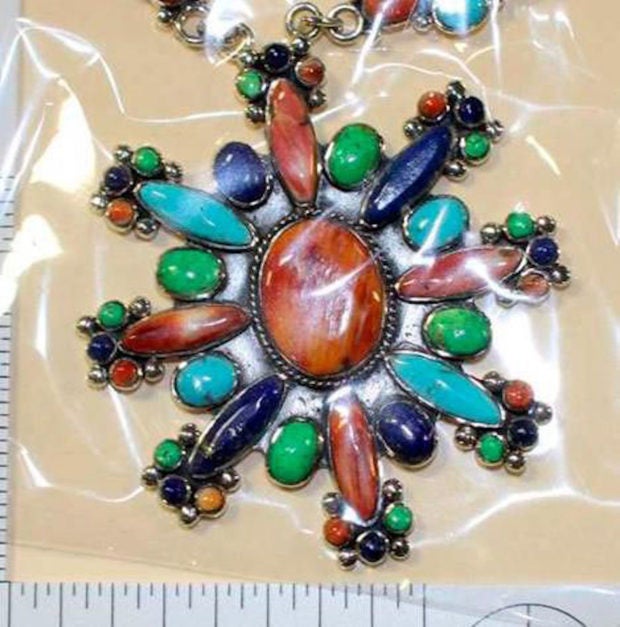 Three members of an international conspiracy to import knock-off jewelry from the Philippines and misrepresent it as Native-American pleaded guilty for their roles in the fraudulent scheme.

All three defendants on January 6 pleaded guilty before U.S. Magistrate Judge John Z. Boyle of the District of Arizona.  The defendants face a maximum penalty of up to five years in prison and fines up to $250,000.  Their sentencing dates have not yet been set.

Laura Marye Wesley, a.k.a. Laura Lott, 32, pleaded guilty to one count of conspiracy to commit misrepresentation of Indian-produced goods, wire fraud, mail fraud, and entry of goods by means of false statements and smuggling goods, for her role in the manufacture, importation, and sale of knock-off jewelry as Native American-made.  Wesley is scheduled to be sentenced on March 30, 2020.

Christian Coxon, 46, and Waleed Sarrar, a.k.a. Willie Sarrar, 44, pleaded guilty to one count each of conspiracy to misrepresent Indian-produced goods and to commit wire fraud, for their role in ordering and misrepresenting imported, knock-off jewelry as Native American-made at their respectively owned retail stores Turquoise River Trading Company in San Antonio, Texas and Scottsdale Jewels in Scottsdale, Arizona.  Coxon and Sarrar are also scheduled to be sentenced on March 23, 2020.

The defendants admitted that from January 2016 through February 2019, they conspired with each other, and others, to design jewelry in the Native-American Indian-style and manufacture the jewelry in the Philippines with Filipino labor.

The defendants also conspired to import the jewelry from the Philippines to Arizona without indelible markings as required by law, and display, advertise, and sell the jewelry to customers based on false representations that the jewelry items were made by Indians in the United States.

To perpetrate the fraud scheme, the defendants and their conspirators communicated by phone, text, and email, including across state and country borders; used private commercial shipping services such as FedEx to import jewelry from the Philippines to the United States; paid for the jewelry inventory through credit cards, including via web-based credit card processors, and by check; and charged the credit cards of customers who purchased the imported Indian-style jewelry.

Scottsdale Jewels in Scottsdale, Arizona was among the jewelry stores that sold fake Native American jewelry that were made in the Philippines. PINTEREST

Wesley also admitted to removing “Made in the Philippines” stickers from bags of imported jewelry, smuggling jewelry into the U.S. from the Philippines through the U.S. Postal Service to avoid inspection by federal authorities at the port of entry, wiring money to the Philippines to cover the costs of the jewelry-making business there, working with Filipino factory workers who were manufacturing the knock-offs, and delivering the knock-off Native-American-style jewelry to retail jewelry stores in Arizona, Colorado, California, Texas, Minnesota, Utah, and elsewhere.

The Indian Arts and Crafts Act (IACA) prohibits the offer or display for sale, or the sale of any good in a manner that falsely suggests that it is Indian produced, an Indian product, or the product of a particular Indian and Indian tribe.

The law is designed to prevent products from being marketed as “Indian made,” when the products are not, in fact, made by Indians.  It covers all Indian and Indian-style traditional and contemporary arts and crafts produced after 1935, and broadly applies to the marketing of arts and crafts by any person in the United States.

The IACA provides critical economic benefits for Native American cultural development by recognizing that forgery and fraudulent arts and crafts diminish the livelihood of Native American artists and craftspeople by lowering both market prices and standards.