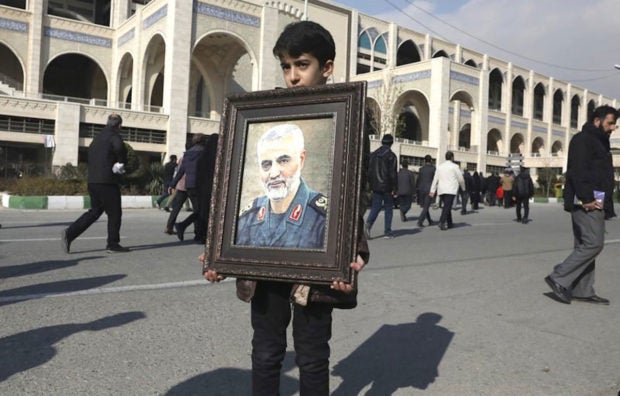 A friend of mine was happy over the holidays when I wished him well.

On Facetime, he was sitting pool side, happy about the booming stock market and proud to declare, “Now all we need is another four years of Trump!”

Is that you during the holiday lull? Many news organizations lulled us with pieces like “top ten” this or that for the decade to fill the void. And I have something to say about that.

But first, we must address how life has gone from “Jingle Bells” to “Jingo Bells.”

The impeached president was in Mar-a-Lago with his chums, playing the world, essentially by remote control with his tweets. And all while his military kills the Iranian General Qasem Soleimani, Iran’s second in command.

Sounds like a declaration of war, doesn’t it? Hey, don’t we need Congressional input  for that?

Of course, we do. But this is just a war to evade finalizing one man’s impeachment.

This doesn’t sound good for anyone—except for Donald J. Trump, TIP (as in “the impeached president.”)

If you read his tweets trying to justify the killing of Soleimani, Trump  can be pretty convincing saying that Soleimani “has killed or badly wounded thousands of Americans over an extended period of time, and was plotting to kill more…but got caught.”

We know Soleimani’s past as the leader of Iran’s elite Quds Force of the Islamic Revolutionary Guard Corps, and how the Shiites have used proxies to destabilize throughout the region.

But where is the proof that Trump’s action was needed? Where was the discussion?

And why would we blindly trust an impeached president who has lied or has made more than 15,000 false or misleading statements to date?

Too many questions and yet here we are. Allies were in the dark, except for Israel, whose leader, the indicted Netanyahu, must be something of a role model for Trump. You too can be on the edge of the law and do whatever you want in a “democracy.”

Strong men with bombs are all the rage these days. Bomb first, talk later is the game. Just bomb.

Trump now says he wasn’t starting a war and isn’t interested in regime change. So why take such a brazen move?

Israel has survived a Netanyahu, maybe Trump figures the U.S. can do the same.

But wait, the U.S. is not Israel. We are above the fray. We use diplomacy when we can. What took us to the point where we’re killing Iran’s No. 2?

And where is the isolationism of Trump? Was it all fake isolationist talk, not wanting to drag us into another endless war. Because that’s where this is all leading. Thousands of troops are now ready to be deployed because the fearless leader has struck and doesn’t exactly know what the next move will be.

There will be a retaliatory strike by Iran. But where? And how? This is not the way you play this deadly chess match.

Once we took out Soleimani, there should have been a plan, a strategy, something in place. And Americans should all be united. But the president didn’t go to Congress. He didn’t seek approval. He acted alone.

Trump is like a lone golfer lost in the woods, hacking desperately hoping to get out of the trees. It’s a move that left all our top allies in the dark.

Senator Mazie Hirono, our key Asian American who is the Ranking Member of the Senate Armed Services Subcommittee on Seapower, took note of that.

“Soliemani’s death in a U.S. airstrike further escalates hostilities and increase the potential for widespread violence in a part of the world already fraught with peril,” she said. “In normal times, we could have confidence that the president—fully cognizant of the potential ramifications of this strike—was mobilizing a whole of government response and coordinating with our allies to see a diplomatic outcome. But these are not normal times. Congress must reassert its Constitutional responsibility and demand the president seek authorization prior to any military conflict with Iran.”

Trump is skirting the Constitution yet again. He may see this as a way to circumvent impeachment efforts, but it only shows how unfit this president is to lead.

Ukraine was a small matter compared to this new involvement the president, once the isolationist, now seems so willing to expose the nation and sacrifice our sons and daughters.

An endless World War III is not a good outcome. With more at stake now, Trump may have provided the best reason for a thorough impeachment trial with all the witnesses to expose him as a threat to our democracy and hasten his removal.

I’m glad to see talk on the internet about a list of Asian American accomplishments over the last decade  that – surprise — leaves out Filipinos. It’s the same old, same old.

We need the group to be part of the muscle of 21 million Asian Americans in the U.S. But we feel slighted when we are ignored as part of the group.

In the past I’ve contributed to NBC News Asian America and my stories of Larry Itliong, and the Delano Manongs are still there; so I know the site isn’t racist against Filipinos.

But there are blind spots among other Asian writers. Ethnic Diversity among Asians has always been lacking. It’s right to speak up and let them know we won’t accept “erasure.”

What you should be alarmed about is how we’re mentioned when we’re discovered.

“Saturday Night Live” has always been a good target of my posts and columns. Over the last ten years, I’ve taken shots  at the “Not Ready for Diversity” players.

Recently, Bowen Yang, was added to the cast. And now he gets to play Andrew Yang. He’s the second Asian after half-Filipino Rob Schneider. Being half-white allowed Schneider a versatility Yang doesn’t have ethnically, so Schneider’s Filipinoness never really registered.

But recently, Filipinos have come up, probably in a historic first.

On the Jennifer Lopez-hosted episode, SNL writers saw fit to mention Filipinos twice by name in the same show. That’s got to be a moment in racial show biz history.

In one gag, a Weekend Update guest commentator talks about going up to honor a Native American woman he sees in the subway, and the woman replies back,  “I’m Filipino.”

Later in an ad parody, the writers pun “Filipino” with “Fallopian.”

We’re still punchlines. Is that really a sign of progress? Or are they just discovering a new group amongst us that won’t stand up to them?

It’s not like Eddie Murphy joking as “Buckwheat.” At least he’s in on the joke. We aren’t. That can’t be a good sign.

In my college days, I saw white guys saying the word “negro” and laughing. Pulling status is always funny when it’s not at your expense. I was appalled.

That’s why as more of us tell our own Filipino stories, we can expect the irony of ironies–more inclusion in the days ahead, but we’ll also see tears when we’re portrayed by others.

Compared to where we were ten years ago, the Trump era has only heightened the sense of polarization that exists in our country.

In 2020 and the decade ahead? The struggle in our unique conflict known as “being Filipino Asian Americans” won’t end soon.

Emil Guillermo is a journalist and commentator. He writes a column for the Inquirer’s North American Bureau. Twitter @emilamok. Listen to him on Apple podcasts.  Get tickets to his new one-man show at http://www.amok.com