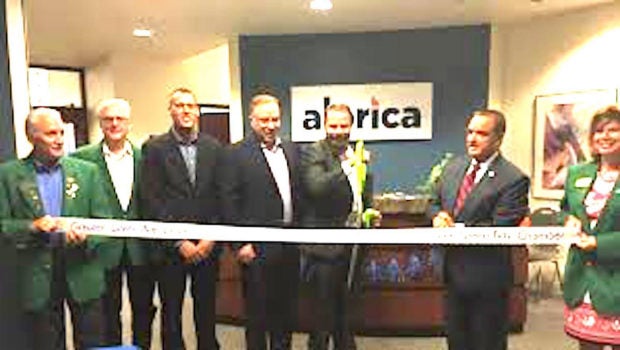 A previous Alorica hiring event announcement in downtown Green Bay, Wisconsin. The company announced a plan to close that operation and several others in the U.S. while hiring 9,000 workers in the Philippines.  CONTRIBUTED

Linda L. Hinton, CWA (Communication Workers of America) District 4 Vice President, stated, “Their business model is all about creating a race-to-the-bottom for workers, by laying off U.S. workers and exploiting workers overseas in places like the Philippines, where they keep wages rock bottom low and are virulently anti-union. It’s time we end the corporate offshoring and outsourcing model that hurts both U.S. workers and communities as well as their overseas counterparts.”

Alorica’s expansion in the Philippines will bring the company’s workforce to nearly 50,000 in that country, servicing the U.S. customer base for corporate clientele including AT&T and Citi.

According to the CWA, in the Philippines, Alorica takes advantage of weak worker protections in order to intimidate employees and prevent them from joining together to advocate for improved working conditions.

A CWA delegation met with Alorica workers and allegedly found “a climate of hostility that has allowed Alorica to fire dozens of union supporters and bring trumped up criminal charges against Filipino union officers, just for holding a protest outside an Alorica office.”

Alorica’s practices have boosted the call for anti-offshoring legislation, such as the bipartisan federal “U.S. Call Center Worker and Consumer Protection Act” (S.1792 and H.R. 3219), and trade agreements with enforceable labor protections.