Cardinal Tagle, from Manila to the Vatican 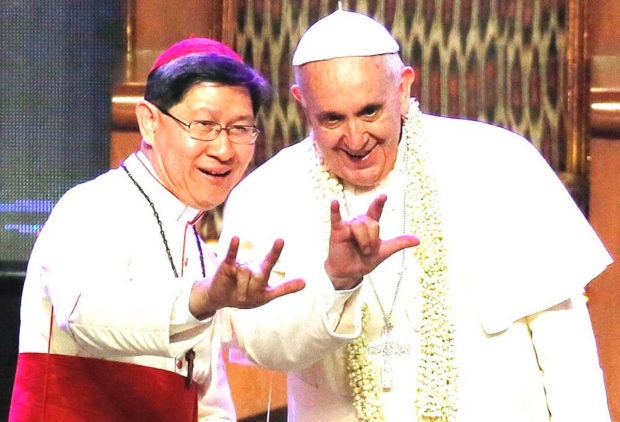 Filipino Cardinal Luis Antonio Tagle, left, shows Pope Francis how to give the popular hand sign for “I love you” at the Mall of Asia arena in Manila, Philippines, Friday, Jan. 16, 2015. Pope Francis is on a five-day apostolic visit in this predominantly Catholic nation in Asia. AP PHOTO

When our aging Benedict XVI removed the ring of the fisherman forever and abdicated the holy office of the Maximus Pontifex in February 2013, it was like an electric shock for the whole human race. During the sacred conclave of 2013, young Cardinal Tagle was a papabile and Jorge Mario Cardinal Bergoglio of Buenos Aires was not. When the latter became Pope Francis, the first Latin American pontiff, Cardinal Tagle assured the new Vicar of Christ of his out-all support and the “closeness and collaboration” of Filipinos.

Benedict XVI made Cardinal Tagle the 32nd Archbishop of Manila, the premier Metropolitan See in the Far East, which was founded in 1579. The Pride of the Caviteños and once tagged as “Asian Francis” by Vatican expert John Allen Jr., Cardinal Tagle has proved himself to be trustworthy, hardworking, and one of the most reliable. In addition to being Manila Archbishop, his election as President of both Caritas International and the Catholic Biblical Federation in 2015 was confirmed by the Pope, giving him a wider global influence. The Jesuit pontiff likewise made him preside over the all-important Family Synod in Rome in 2016.

There’s something more. Pope Francis’ recent choice of Cardinal Tagle as the Prefect of the Propaganda Fide reflects the Holy Father’s deep desire for a missionary Church and a further manifestation of the Holy Father’s bold intention to reach out to more Asians, who now make up two-thirds of the world’s population.

The timing of appointment is crucial. The December 8 designation coincided with the Solemnity of the Immaculate Conception, the Principal Patroness of the Filipino people. It also comes at a time when His Holiness assigned Archbishop Bernardito Auza as the first Filipino Papal Nuncio to Spain, the empire that brought Christianity to the Philippines in 1521, a time when the entire Filipino people is set to mark the 500th year of being Christian, even if the Head of the State said that he would play no part in the national celebration of the 2021 Jubilee Year.

Never mind how Philippine Head of State has launched a hate campaign against the Catholic clergy, and urged tambays to rob and kill bishops. Never mind how the Foreign Affairs chief Teodoro Locsin Jr. slammed the Catholic Bishops’ Conference of the Philippines president and Davao Archbishop Romulo Valles, calling him a “disgrace,” a “moron… in a white mu-mu (belonging to a) retarded retinue of ecclesiastical idiots.” The fact is that Tagle’s appointment seems to climax the multiple manifestations of how the Vicar of Christ shows unprecedented trust in the Filipino hierarchy.

“It’s true that anything could happen, but let’s face it: At my age, I do not have much to lose,” Pope Francis has repeatedly remarked. When everyone else wants to live, our octogenarian Pontiff isn’t afraid to die. But, whispering my own thought experiment, is Pope Francis, who’s feeling the heavy toll of old age and his duties, positioning Tagle to become a papabile or a candidate most likely to be elected pope?

The Propaganda Fide is one of the largest dicasteries in the Roman Curial, with a scope of authority and influence bigger than others. The impending merger of the Pontifical Council for the Promotion of the New Evangelization with the Propaganda Fide will make Cardinal Tagle’s Congregation the biggest single Vatican office and will make him one of the most powerful in the corridors of Vatican powers.

The consequences are immediate. Cardinal Tagle’s new role permanently uproots him away from Manila and makes Rome his home residence. Filipinos are now talking about who would likely to succeed him: Who will be the next Manila Archbishop? Will he be a firebrand like Cardinal Sin who confronted the Marcos dictatorship and, with Cebu Archbishop Cardinal Vidal, led the peaceful-people-powered Revolution of 1986?

Or will he be someone pious who would not rock the boat or, au contraire, someone pastoral who will not be cowed into silence by certain clear and present dangers? Or someone willing to offer his dear life in the bloody and tortuous altar of sacrifice like Archbishop Romero of El Salvador? Or someone holy like Teofilo Camomot of Carcar (1914-1988), Alfredo Versoza of Lipa (1877-1950), or Alfredo Obviar of Lucena (1889-1978)?

ADVERTISEMENT
MORE STORIES
Fil-Am Democrats hail Biden’s choice of Harris as running mate
Over 900 US health care workers have died of Covid, at least 25 of them Filipinos
Fil-Am artists push on despite the pandemic
Don't miss out on the latest news and information.