The Buffalo Bills tightened their grip on an AFC playoff spot and moved a step closer to first place in their division with a 26-15 US Thanksgiving Day victory over the Dallas Cowboys.

Dallas scored a touchdown on their opening drive in front of the Dallas crowd of 76,000 but then the Bills’ defense took charge. Quarterback Josh Allen completed 12 consecutive passes at one point as Buffalo improved to 9-3 on the season.

Allen finished with 231 passing yards and a touchdown. He completed 19 passes to seven different receivers and also ran in for another TD.

Bills players whipped out the "Dak dance" while beating the Cowboys 😅

The win leaves Buffalo 1 1/2 games behind first-place New England, who travel to Houston for a Sunday night game.

Dallas quarterback Dak Prescott completed 32 of 49 passes for 355 yards and two touchdowns, but also tossed an interception and lost a fumble.

He found Ventell Bryant for a 15-yard score with 4:01 left in the game, but the score came too late for the Cowboys who dropped to 6-6 on the season.

The Cowboys are just a half-game ahead of Philadelphia for first place in the NFC East. The Eagles visit Miami on Sunday. 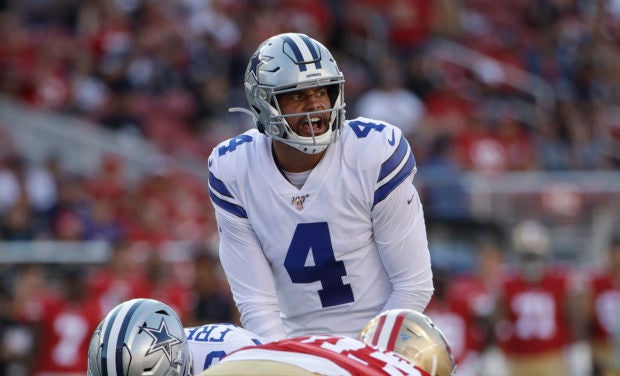 Elsewhere, Mitchell Trubisky hit David Montgomery for three touchdowns including a go-ahead score with 2:17 left in the fourth as the Chicago Bears beat the Detroit Lions 24-20.

Trubisky passed for 338 yards while Montgomery had 75 yards on 16 carries and caught two passes for 16 yards for the Bears who improved to 6-6 on the season.

Anthony Miller caught nine passes for 140 yards, while Allen Robinson grabbed eight for 86 yards and a touchdown for the Bears, who have won two in a row.

Chicago also spoiled a strong NFL debut for Lions backup quarterback David Blough, who passed for two touchdowns and 280 total yards. Blough threw an interception on the final possession for the Lions.

Kenny Golladay had four receptions for 158 yards and a 75-yard touchdown for the Lions, who have lost five straight and eight of nine.

Trubisky engineered a nine-play drive in the third quarter that tied the game at 17-17.

The Bears finished it off with an 18-yard touchdown pass from Trubisky to Jesper Horsted, who made a diving catch with 4:44 left in the third.