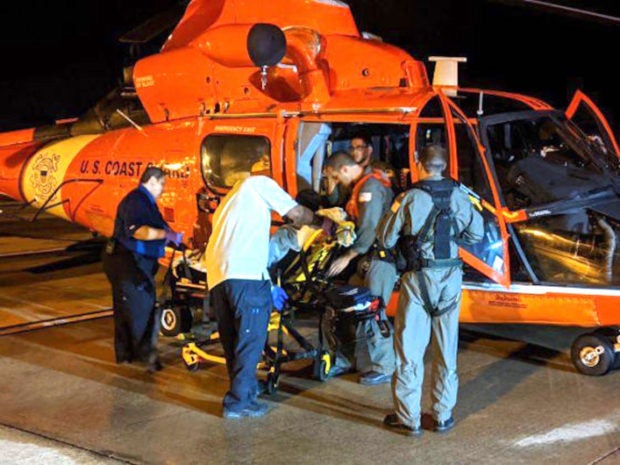 The crew of a U.S. Coast Guard MH-65 Dolphin helicopter assists a crew member of the Marella Eplorer 2 Cruise ship. The crew member had been stricken by a heart attack at sea and was medevaced to St. Croix, where he was treated at the Juan F. Luis Hospital. U.S. COAST GUARD

The seafarer was flown from some 50 nautical miles southeast of the U.S. Virgin Islands for treatment on St. Croix.

Coast Guard watchstanders received medevac request from the Marella Explorer 2 at 10:47 p.m. Monday, after one of their crew members experienced a heart attack and required immediate medical attention ashore.

The rescue helicopter arrived on scene and the crew deployed their rescue swimmer to assess the condition of the patient. An EMS crew later transported the patient by ambulance to the Juan F. Luis Hospital.

The cruise ship was traveling from Bridgetown, Barbados to Tortola, British Virgin Islands, when the incident was reported to the Coast Guard.