Kawhi Leonard and Paul George, playing together for only the fourth NBA game this season, powered the Los Angeles Clippers over the Dallas Mavericks 114-99 on Tuesday.

Leonard had 28 points and eight rebounds while George had 26 points and six steals as the Clippers improved to 13-5, 2 1/2 games behind the Western Conference leaders, the Los Angeles Lakers.

The Clippers stretched their win streak to six games and so did the Denver Nuggets, who defeated visiting Washington 117-104 in the night’s only other league game.

Leonard, last season’s NBA Finals Most Valuable Player after leading Toronto to the league title, jumped to the Clippers in part because he wanted to play alongside George — and the dynamic duo showed what they could do after only a week together and healthy.

“Adding myself and Kawhi to the group, we sprinkled into the group,” George said.
“We’ve got 50 (points) coming off the bench.
We’ve got waves.
It’s fun playing.”

George had been sidelined by shoulder surgery until mid-November, his return coming after Leonard was out with a knee bruise.

The Clippers, only 2-4 on the road, shut down the NBA’s top-scoring offense, holding Mavericks star guard Luka Doncic to 22 points, eight rebounds and six assists.

The Slovenian star was only 4-of-14 from the floor, 0-of-8 from 3-point range, and made seven turnovers under defensive pressure from Leonard and George much of the night.

“We have guys who love playing defense,” George said.
“That’s what we hang our hat on.”

Dallas, 11-6, saw the end of a five-game win streak in which the Mavs had averaged nearly 130 points a game.

Lou Williams came off the Clippers bench to score 21 points, hitting 4-of-7 shots from beyond the arc, as the NBA’s top-scoring bench outscored the Dallas reserves 44-37.

George scored 17 points in the first quarter, hitting four 3-pointers, and the Clippers jumped ahead 34-27 after the opening period. 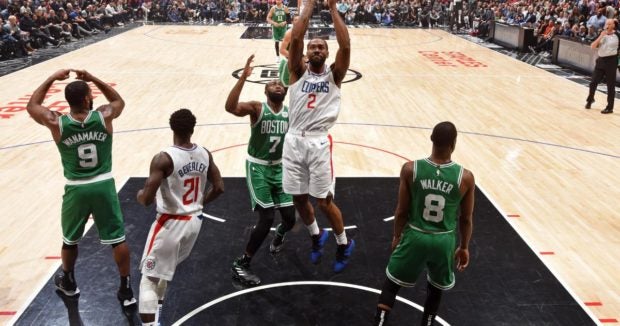 Leonard was 1-of-6 for two points in the first quarter but made 5-of-7 in the second for 13 first-half points as the Clippers surged ahead 62-46 at half-time.

Doncic scored 15 first-half points thanks to an 11-for-11 performance at the free-throw line, connecting on only 2-of-9 from the floor and going 0-for-5 from beyond the arc.

The Clippers led 93-78 entering the fourth quarter and stayed in command to the finish.

At Denver, the Nuggets improved to 13-3 by thumping the Wizards.

Jermani Grant came off the bench to lead Denver with 20 points while Will Barton added 17, Jamal Murray added 16 and Nikola Jokic pulled down 20 rebounds.