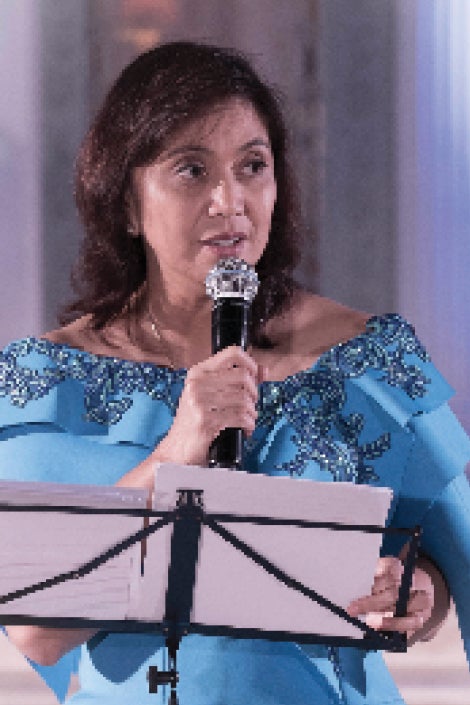 The Filipino American Symphony Orchestra (FASO) held its inaugural awards gala on Saturday, June 17 at the Mary Pickford Estate and invited Robredo as its guest of honor.

Earlier in the afternoon, select attendees participated in a meet and greet with the vice president. During the dinner, she addressed the crowd for nearly 15 minutes, in which she talked about the importance of the arts and progress on her office’s anti-poverty program.

“I consider it a great honor to be given the chance to help, even in a very small way, in raising funds to sustain the only Filipino symphony orchestra outside of the Philippines,” she said in her speech. “Bringing music to every man, woman and child, especially for those who long the sounds of home, is a very important advocacy.”

No talk of PH politics

Though she did not go into the political situation in the Philippines, she vaguely touched upon “global and local challenges, many of which we cannot control.”

“But the extraordinariness of ordinary people are giving us hope,” she said, citing examples she’s seen through Angat Buhay, which focuses on nutrition and food security, universal healthcare, education, rural development and women empowerment. She noted that the program is now in 127 areas of the country.

With the current situation in the Philippines — including the Marawi crisis which is now in its fifth week — Robredo denied requests to be interviewed by local media.

Since May 23, Philippine troops have been fighting the Islamic State(IS)-linked Maute group, prompting President Rodrigo Duterte to declare martial law in the Mindanao region. This week, the government has recorded 375 deaths associated with the clash.

“There are many ways each of us can give our nation a push towards a brighter future,” the vice president concluded in her speech.

Also during the event, four awardees were recognized: Filipina singer and actress Sylvia La Torre and soprano Maria Christina Navarro for Excellence in Music, and musician and teacher Cecilia A. Coo-Cruz and accountant and former FASO board member Titus Verzosa for Excellence in Service.

Robredo’s overseas trip was not without controversy, however. Nearly a dozen protestors held signs outside the gated community where the event was being held. On the internet, various bloggers questioned where the proceeds of the gala would go to, alleging that they would benefit the vice president.

However, throughout the gala program, several of FASO’s board members reiterated that the funds would be put toward the orchestra and its music education programs.

As of this writing, the total amount raised on Saturday had not yet been disclosed.

While in LA, Robredo met with members of the United Bicolandia Los Angeles, an association of individuals who immigrated to the U.S. from the Bicol region, where the vice president is also from.

Afterwards, she made her way to Boston, where her eldest daughter, Aika, will be attending a master’s program at Harvard University. The vice president returned to the Philippines on Thursday, June 22.

LATEST
Military claims key victory vs Abu Sayyaf without firing a shot
The internet panicked over a cable maintenance advisory. What are submarine cables?
Leave no one behind? Taiwan asks UN why it’s still not welcome
‘Outdoor’ badminton gets support from local federation
Honeymoon postponed as duty calls for Kevin Alas
MOST READ
usa Hawaii surfer loses board, teacher finds it 2 years later in PH
usa States that vaccinate the most, and the least
usa Canada has more reported anti-Asian hate incidents than U.S. — report
usa Healers grapple with mental health issues in Fil-Am community
usa Beware of cruise ship job recruitment scams
usa What are the different types of Covid-19 tests?
usa Trump’s Legacy: Nearly 200,000 Americans dead, and the number is growing