Los Angeles Dodgers slugger Cody Bellinger was named National League MVP on Thursday as Angels ace Mike Trout picked up the award for the American League for the third time.

The first baseman and outfielder Bellinger beat off competition from Milwaukee’s Christian Yelich and Washington Nationals ace Anthony Rendon to land the award for the first time.

The 24-year-old finished the regular season with 47 home runs, 34 doubles, and an NL-leading 351 total bases.

For the third time in his career, Mike Trout is your AL MVP. pic.twitter.com/wN0AwBQztl

Bellinger and Brewers star Yelich — the 2018 NL MVP — had been locked in a home run race all year.

However, Yelich’s season ended abruptly on September 10 when he suffered a broken kneecap in a freak incident, ruling him out of the final 18 games.

“This award, man, it just makes me so much hungrier to keep performing,” Bellinger said.
“The feeling that you have, why would you ever not want to receive this? So I have to keep working hard at what I do and hopefully, keep getting better.”

Despite his dazzling form in the regular season, Bellinger was largely ineffective in the postseason, when the Dodgers crashed out to eventual World Series winners Washington.

However, voting for the MVP award took place before the playoffs so did not take into account postseason form.

To receive an award with the name Hank Aaron on it is truly special to me… #THANKYOU https://t.co/UxpRpg709B pic.twitter.com/mo7pCSXaWl

The award, which is voted on by members of the Baseball Writers Association of America, sees two writers in each league city cast votes on a tabulated system. 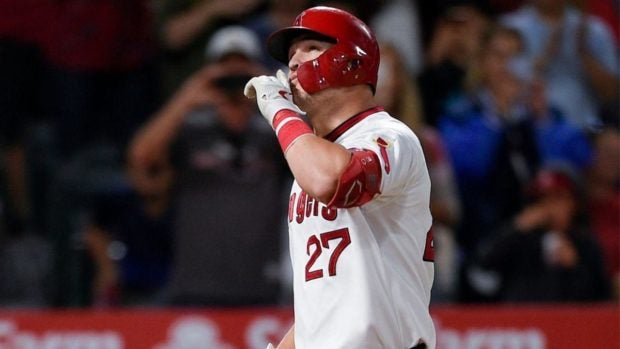 Check out the ‘Unicorn Puppy’

Trout beat out competition from Houston Astros’ Alex Bregman and Marcus Semien from the Oakland Athletics.

Trout won 17 first-place votes in the ballot, with Bregman netting 13.