Fil-Am nurse cares for ‘the other cancer patient’ – the caregiver

Fil-Am nurse cares for ‘the other cancer patient’ – the caregiver 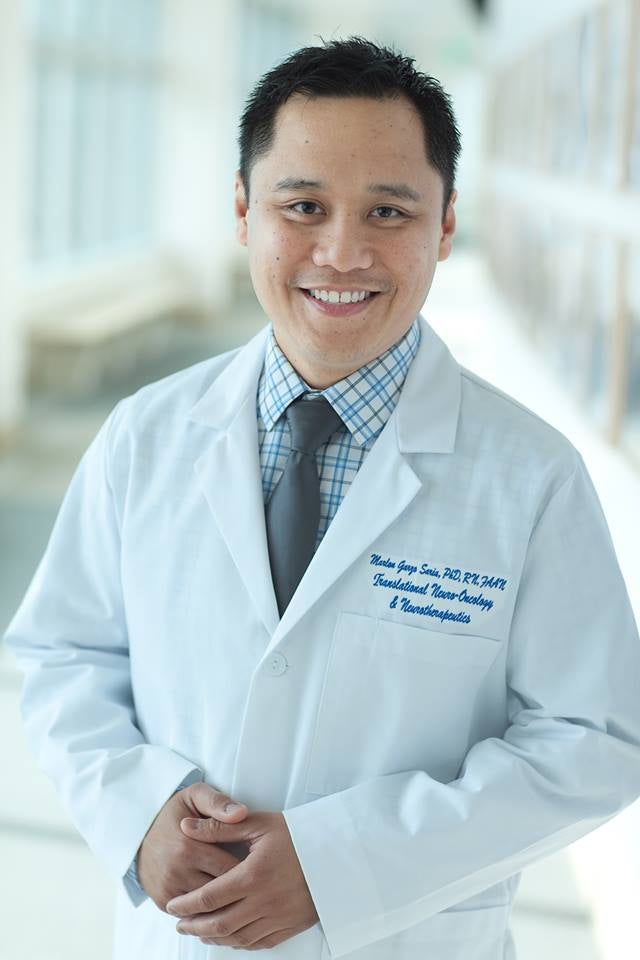 While most nursing graduates want to immigrate to America, Professor Marlon Garzo Saria, 39, did not have a choice. Given the chance, he would prefer to stay and work in the Philippines after he got his bachelor of nursing degree at UP Manila.

“My paternal grandfather, a World War II veteran, initiated the process by filing the petition for my father in 1986. We immigrated in September 1998,” Dr. Saria explains.

He may not be in the Philippines, but his contributions to cancer research and providing quality care for caregivers of cancer patients are invaluable.

Currently, he is assistant professor and advanced practice registered nurse and director of the Center for Quality Outcomes and Research (CQOR) in the Department of Translational Neurosciences and Neuro-therapeutics at the John Wayne Cancer Institute.

‘We do not have a position for you’

Four months after entering the US, in January 1999, Saria was able to take the Nursing Board State Examination. He passed the examination and received his license a few months later. Dr. Saria with colleagues at Center for Quality Outcomes and Research (CQOR) in the Department of Translational Neurosciences and Neuro-therapeutics at the John Wayne Cancer Institute. CONTRIBUTED

He applied to all the acute care facilities in San Diego. However, the responses he received were similar:

“Regrettably, we do not have a position for you at this time. Please contact us again when you have gained more experience.”

Despite this, he did not lose hope. He continued applying for nursing jobs until he was referred by a family friend to a Navy recruiter and got scheduled to take the Armed Services Vocational Aptitude Battery (ASVAB).

When the results came back, the recruiter told Saria that he passed the test, but because he took nursing outside the United States and was not yet a US citizen, he must enlist to qualify to work in the Navy.

Saria was contemplating his options when a fellow participant in a therapy certification course he was taking mentioned the “The U,” which is the University of California in San Diego.

He went to the human resources office at UC San Diego and applied. After the interview, Saria was offered a job on a new graduate program.

But working was not as easy as the interview. Like many Filipino immigrants, Saria struggled with his accent.

“I was ever so self-conscious of my accent.  It took me a while to develop an ear to understand conversational English. I could not count the number of times I had to say, “excuse me?” or “what was that again?” Saria chuckles.

Noticing this, one of his mentors told him that some of the smartest men and women she listened to have foreign accents and that he should not be ashamed of his.

Saria worked with Dr. Santosh Kesari, a renowned scientist who is working to deliver the cure for cancer. In the early stage of a clinical trial program, Saria assisted in developing and implementing research protocols.

After his PhD, Saria became the director of CQOR. He is now developing research and clinical programs focused on reducing the suffering of cancer patients and improving the quality of life both for patients and their family caregivers.

He says the team is developing a caregiver clinical program that will provide an individualized plan of care for caregivers, including respite for caregivers, supplemental services, interventions to reduce burden and improve health, termed as “precision caring.”

“When I was trying to recruit a caregiver to participate in my research, I told her that caregivers are like jugglers–working hard to keep balls, clubs, or rings up in the air. These represent young children, jobs, housework, schools, older parents, and other tasks. When I said that caregivers always drop the ball on ‘self-care’ first (they take care of everyone first and always put themselves last), she said that I am wrong. The ‘self-care’ ball does not get picked up in the first place. That was a profound message that validated the importance of my research,” Saria narrates.

“Caregivers are the ‘other patients.’ They are often neglected and some caregivers look worse than the patients,” Saria explains.

As a scientist, he is not confined to an 8-hour job. Saria’s work does not start and end with a time clock. “Some days are better than others, but the one fact that is part of a scientist’s work is that the work is never done. We always have to look ahead to the next grant application, the next study, the next publication… all so that we could help the next patient,” Saria explains.

Yet, his focus is not always on research. When Professor Saria became the president of Philippine Nurses Association (PNA) San Diego, he prioritized the establishment of a sustainable funding mechanism for global disaster response and relief. Three weeks later, Typhoon Haiyan devastated Leyte. Through PNA, he personally delivered financial assistance to 27 families devastated by Typhoon Haiyan. According to him, the fundraising efforts continue to this day to sustain the program for victims of Typhoon Haiyan.

Saria has an appointment as faculty for the University of the Philippines Open University and is also a visiting research scholar at Chiba University, Japan.  He often travels to the Philippines and will return to Manila in October with physicians from the American Society of Clinical Oncology and another nurse from the Oncology Nursing Society to share their expertise with Filipino nurses.

His dedication to research was noticed by the scientific and academic communities. He was awarded the Distinguished Alumni Award by UP. The American Cancer Society awarded him a doctoral fellowship. He also received the Pearl Moore Award. In 2014, he was inducted as a Fellow in The American Academy of Nursing. He was honored with a lifetime achievement by the Global Caring Nurses Foundation.

Like many professionals in America, Professor Saria believes that “one does not have to be in the Philippines to serve the people.”