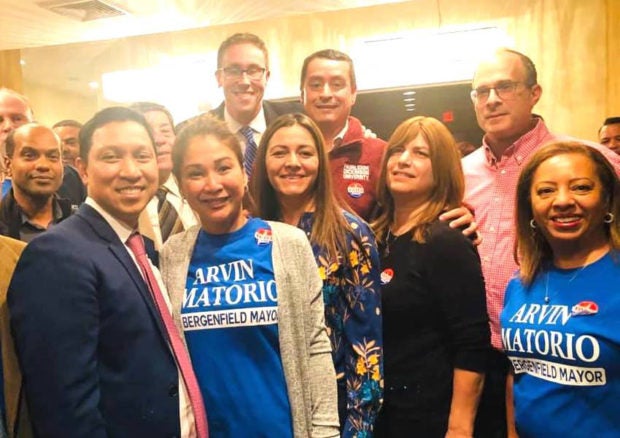 Mayor-elect Arvin Amatorio (left, front) of Bergenfield, New Jersey thanked his supporters for standing up against a misleading 11th-hour attack by his incumbent opponent. FACEBOOK

Amatorio bested Schmelz by 166 votes (2,803 to Schmelz’s 2,637). The Baler, Quezon native is the second Filipino American to win as mayor of Bergenfield, following Robert Rivas, who served from 2000 to 2002.

Amatorio is a councilman in Bergenfield Borough; his term as mayor begins in January 2020.

“This is a great night for Bergenfield because of you, despite the malicious attack, despite the negativity that has been thrown to us we kept the fight positive,” Amatorio told his supporters.

Just days before the election, Schmelz publicly accused Amatorio of violating the anti-trafficking law because he had served as the immigration lawyer for someone who was later accused of human trafficking. Amatorio’s campaign announced that he is suing Schmelz for defamation.

Amatorio’s parents were public school teachers. He moved Arvin Amatorio moved to the United States with wife, Ilya, in 2002. He passed the New York Bar Examination in February 2006 and has since practiced immigration law.

More than 5,000 Filipinos make up the biggest ethnic group in Bergenfield’s 27,000 population.