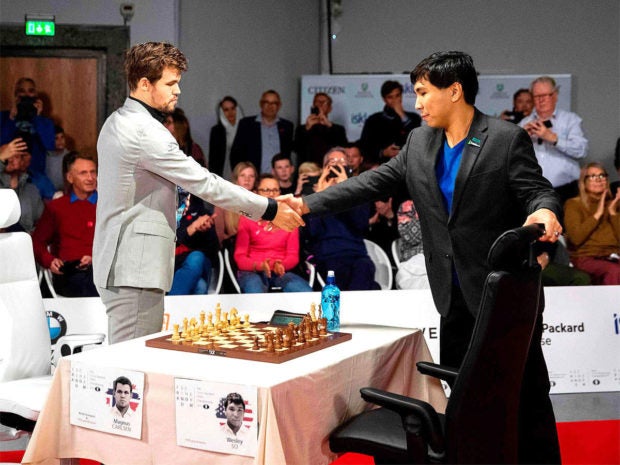 Wesley So shaking hands with Norwegian Magnus Carlsen after beating him in the World Fischer Random Chess championship .AFP PHOTO

I must confess that until recently I was more familiar with Magnus Carlsen than Wesley So. Carlsen is the world’s No. 1 chess player, whom So defeated in a major upset to become the first World Fischer Random Chess champion.

Carlsen was also featured in the popular Netflix documentary “Magnus” about the Norwegian chess phenom known as the “Mozart of Chess,” who became a star at 13 when he drew a match with world champion Gary Kasparov and went on to beat world champion Viswanathan Anand.

One thing is striking in the documentary as we celebrate and reflect on what Wesley So has accomplished. In “Magnus,” Carlsen enjoys much support from his family and beyond in his brilliant rise as a chess champion.

Wesley So wasn’t as lucky.

His journey from chess prodigy to champion was tougher, more frustrating, and in many ways, more impressive than Carlsen’s. It would certainly be a perfect subject for another Netflix documentary.

I was 10 years old when Eugene Torre became the first Asian chess grandmaster in the early 1970s. I still remember the pride many of us felt when he finally made it. The Philippines has long been a chess powerhouse. Wesley So’s triumph underscores this.

Sadly, his victory also turned a harsh spotlight on the state of Philippine chess.

By now, most Filipinos know that Wesley So, who grew up and learned  to play chess in the streets of Cavite, emerged as a champion as a member of the U.S., not the Philippine, federation.

How could that happen? Because Wesley So was essentially ignored and abandoned by the powers-that-be in the Philippine chess world.

He himself cited an “endless cycle of corruption” in the Philippines, which forced him to leave his homeland.

“There’s a basic chess structure in the Philippines, but there’s very little support systems for developing good players into global stars,” he told Chess.com in an interview in April. “While the Chinese or Indian schools will identify talented boys at the age of four, and start giving them all kinds of assistance, there’s no long-term strategy for development in the Philippines.”

“The major problem is corruption. It’s hard for athletes to get financial assistance to compete abroad, especially if they don’t have connections. For example, we would send teams to the Asian Games and there would be more officials on the plane than athletes. But corruption is embedded deep within our culture. It perhaps comes from the years of colonization and domination from foreign powers. You have to know people to get anywhere. People say, you can only get rich within the Philippines if you’re a politician. For normal people, it’s impossible.”

And Wesley So is certainly among the “normal people.” He did not come from a rich family. But he was, like thousands of young Filipinos, drawn to chess, a game he and many others mastered and one in which you don’t need to be rich to excel.

Wesley So even called chess “the poor man’s game.”

“In third-world countries, chess is the poor man’s game,” he said. “Rich people play tennis, polo, and golf, while poor people play chess because you don’t need anything—no uniform, no field or courts. Children don’t need money to play chess. People make the pieces out of bottle caps, or whatever materials they have. So, every week I would cut out newspaper clippings about famous grandmaster games, study them, and then I’d go from street to street with a makeshift board, challenging anyone who knew how to play.”

To realize his potential, he had to move and represent the United States where he found much-needed support and love from actress Lotis Key and her family.

The Chess.com interview was posted six months ago, and has resurfaced in social media after So’s victory. And that’s great to see. For it highlights Wesley So’s incredible journey, the challenges he had to overcome, his rise as a champion from a country where would-be champions endure so much disrespect.