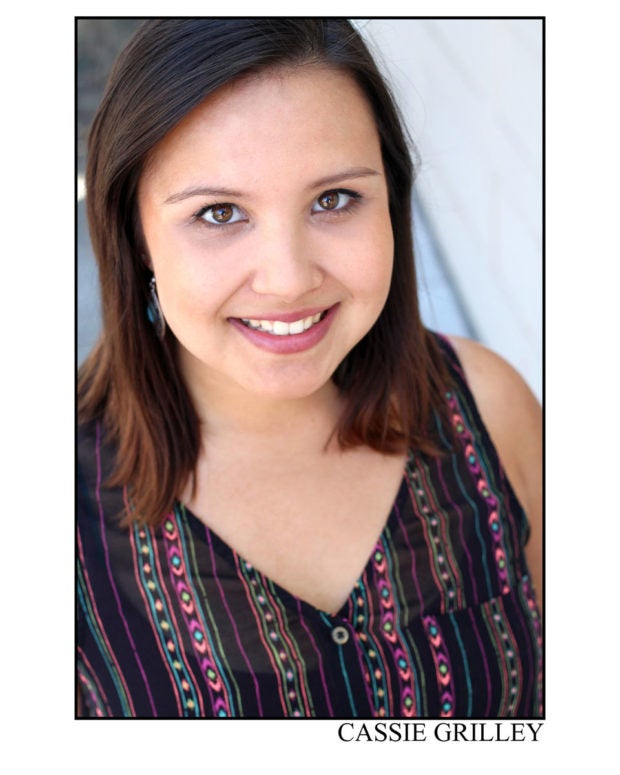 Cassie Grilley is appearing in a San Francisco production of the musical “Gypsy.” CONTRIBUTED

SAN FRANCISCO – Fil-Am Cassie Grilley was born, raised and immersed in musical theater. “[It’s] definitely in my body since I was a baby.”

After playing the lead role in the San Francisco Bay Area Musical production of “Hairspray,” Grilley returns to the stage in the supporting role of Agnes in “Gypsy,” the six-time Tony-winning musical loosely based on the 1957 memoir of famous striptease artist, Gypsy Rose Lee.

A San Francisco native, Grilley grew up watching musicals and performing in her grandmother’s musical theater group, the Young People’s Teen Musical Theater Company, a performing arts organization “devoted to bringing quality and professional-level theatre to young adults,” which was founded in 1984.

“Gypsy” is centered on Agnes’ friend Louise’s mother, Rose, who is known as “the ultimate showbiz mother.” Considered the best American musical by critics and theater historians, “Gypsy” follows Rose’s dreams and her efforts to raise two daughters as performers. It casts an empathetic eye on the hardships of show business denizens.

Agnes belongs to the same troupe as her friend Louise, a lead character and Rose’s daughter who is part of the Hollywood Blondes in the musical. “I felt like it’s been fun with this character because it’s been open ended,” says Grilley. “She’s super quirky and it’s a fun character to play. She’s like ‘I’m in a real live theater for the first time, seeing everything for the first time.’ It parallels a lot with my excitement for the theater.”

In contrast to the usual negative reactions to a career in the arts, Grilley’s family is quite supportive of her work. “They definitely want me to do what I want to do and what I love to do. They are such great supporters. They’ll always come to my shows.”

The antithesis of a stage mother, Grilley’s mother was somewhat initially apprehensive of her daughter’s career choice. “There’ll be times when she’ll be like ‘Are you sure you want to do this?’ I think my mom felt a lot more comfortable because knowing my grandma and knowing how they are all artists and they’re still afloat and they’re still making money… Yeah, it’s definitely what I love to do. There are success stories. And she’s like, ‘Oh, I understand.’ I’m very aware of how lucky I am.”

However, a supportive family steeped in the performing arts couldn’t shield Grilley from the challenges of being a biracial person in an industry that is grappling with stereotypes. “My mom is Filipino and my dad is white. I feel like I’m living in two different worlds. Sometimes I feel like I’m not Asian enough or I’m not white enough. It’s always interesting because wherever I am, it’s either or.”

This polarity of her identity and appearance continues to be a challenge and is something that she “is still working on.” In the recent production of “Hairspray” where she played the lead role of Tracy Turnblad, a character who is white, “I was definitely more ethnic and, apparently, a patron said I wasn’t white enough.”

But all this has not dampened Grilley’s passion for theater. She continues to seek out roles to play on stage regardless of their ethnicity.

Being cast means having a job, and Grilley does not shy away from auditioning for the abundant roles traditionally played by white people.

“For a lot of predominantly white roles, I would go for it because I think that anybody could play any role,” she says. On the other hand, she is mindful of the scarcity of roles written specifically for people of color and is considerate in not accepting roles that should be played by someone that she considers more appropriate for and deserving of it.

“Even if I look Latina, it doesn’t mean that I am Latina. I’ve been trying to make sure I make a point of focusing on what I go out for because I don’t want to be taking roles from anyone else.”

As a biracial performer Grilley finds solace in roles that are racially, ethnically and gender ambiguous. “I love doing new work where I am a wizard, so I can be whoever I am. I just played a dragon in the last show that I did. It was so fun to have that opportunity to play this role that I fit so well. Even it was played by a man in the past.”

In a post-globalized world where the narrative has shifted towards acknowledging and embracing the diversity of people and culture, there is, more than ever, the need for more roles written for and played by people of color on the mainstream theater stage.

“Growing up I would see Lea Salonga [in Mulan]. I would sing ‘Reflection’ all the time because she was the princess I felt closest to. I recently saw ‘Hamilton’ for the first time, and it’s just so mind-blowing to see so many people of color on stage together.”

Grilley would prefer that the audience looked deep beneath the surface and into the essence of the characters. “It doesn’t really matter who I am, it’s what I do that matters.”