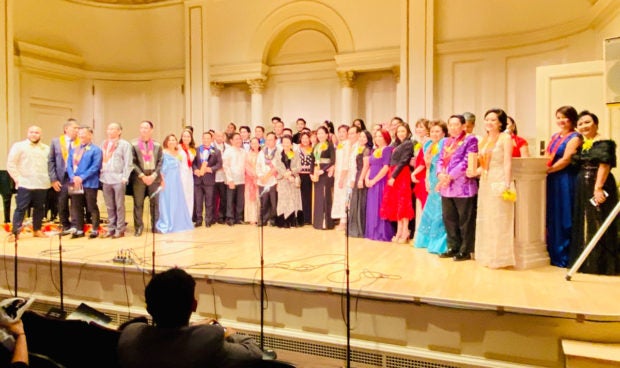 October was packed for TOFA Awards founder and executive producer Elton Lugay and his 14-strong TOFA Performing Artists composed of New York City-based talents committed to TOFA’s goal of elevating Filipino American visibility, who are becoming in-demand as an opening act rendering both the American and Philippine national anthems. 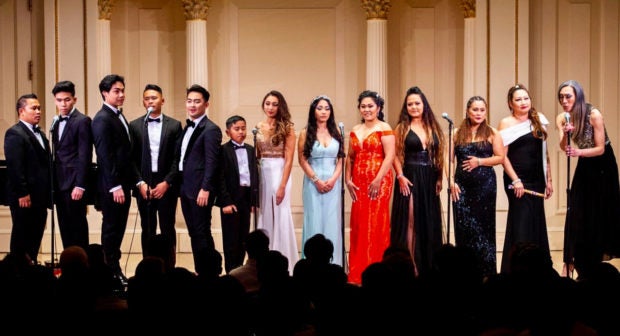 At the WHIAAPI event held at the Department of Commerce headquarters in Washington, D.C. last October 22, the TOFA Performing Artists performed not only the national anthem but also showcased the much-vaunted Filipino singing prowess before a crowd of Asian American community leaders, Republicans and federal government officials. They later went to the White House for an invite-only tour upon an expedited clearance from the Secret Service. 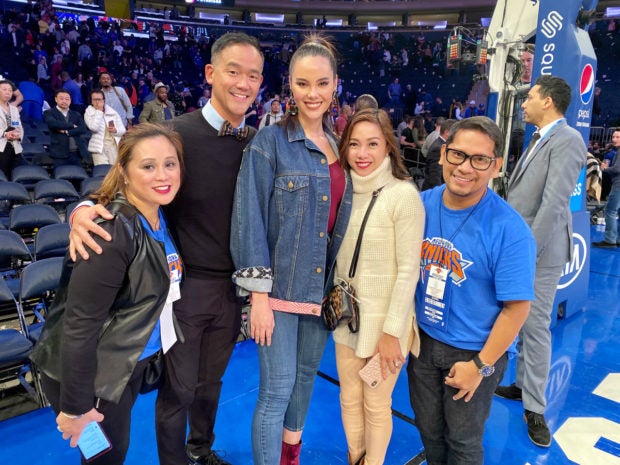 October 28 brought the TOFA Performing Artists to Madison Square Garden, where they sang the national anthem before the big crowd that came out for the New York Knicks’ home game. It was their third performance at an NBA game, having previously performed at the Barclays Center in Brooklyn and Capital One Arena in Washington, D.C.

TOFA’s biggest night still took place at Carnegie Hall, where the 9th Annual TOFA Awards was held last October 26. Due to the precarious health condition of his mother, Dr. Boy Abunda, who has hosted TOFA night since 2015, could not fly to New York to serve as master of ceremonies this year.

His heartfelt message in a video posted on Facebook one day before the gala, immediately went viral and gathered prayers and messages of support from many members of the FilAm community. FilAm media pioneer, host and producer Janelle So-Perkins graciously accepted Lugay’s last-minute invitation to helm TOFA night, and captivated the sellout crowd with her professional demeanor and easy camaraderie with kababayans. Based in California, Perkins also served on the TOFA Board this year and was a TOFA awardee last year. Aside from the Broadway and OPM covers of the TOFA Performing Artists throughout the evening, an impromptu segment hosting done by Josie Harrison, the mother of Jo Koy, made the 9th Annual TOFA Awards memorable with what can best be described as her debut before the larger FilAm community as a comedian in her own right. Jo Koy is this year’s TOFA awardee for creative achievement, and Harrison accepted the award on his behalf.

“I would like to express my overwhelming pride right now, knowing that the TOFA labeled my son as an inspirational human being. I am so proud of all his accomplishments and his being a representation for Filipinos around the world. Thank you for acknowledging him with this award,” Harrison said in her acceptance speech.

She is a radio announcer herself in Las Vegas, a talent that came through during her impromptu TOFA segment along with comedic chops matching her famous son’s. “My mom is there and that’s the next best thing, so continue success and let’s keep inspiring, not just me, but all the Filipinos out there trying to make a difference,” Jo Koy said in a video message to TOFA.

“I just wanted to congratulate my fellow honorees and I wanted to thank TOFA for including me in their prestigious company, to be not only included with their company but the past honorees and the future honorees. I was reading about the accomplishments of many of the men and women honored tonight that are not just in the entertainment industry like myself, but in all facets of life, and it’s really great to know that there are so many Filipinos and Filipino Americans doing such great stuff in the world, so I’m honored to be included with them,” Criss said.

Criss added: “You know, being half Filipino is something that I always considered myself pretty lucky to be. I can’t take full credit for it so I have to give credit to my mom, for making way to the States and starting a family and I give her all my love, respect and gratitude for being the person that gave me this wonderful opportunity and this wonderful heritage. So, I consider it a great privilege in my career and in my life to be included in the Filipino community and I’d like to thank TOFA again.” 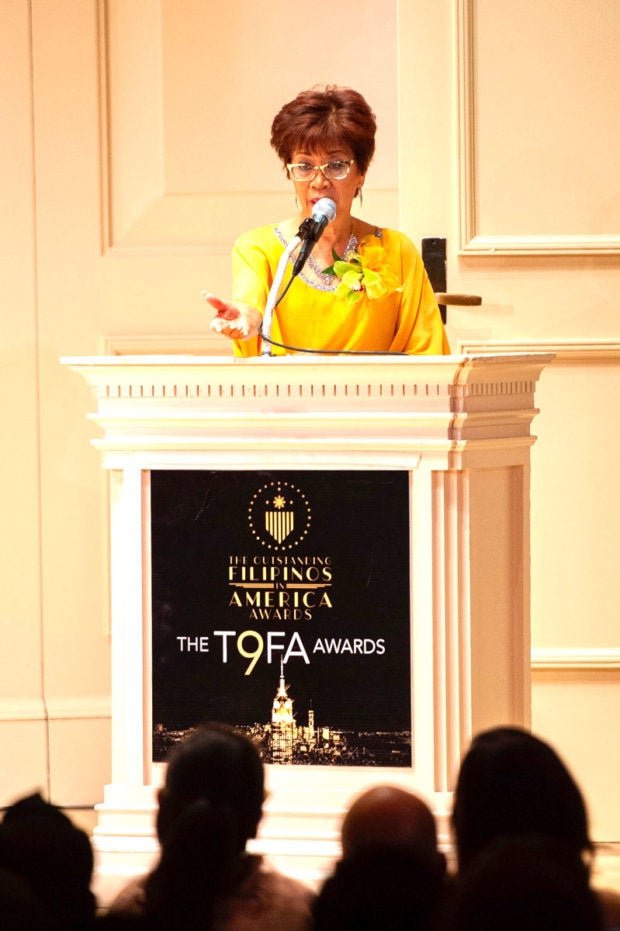 “Tonight, I’d like my fellow Filipinos to take this message to heart: Strive always for excellence for our country, our people and our loved ones. Never mind if no one will recognize you or your achievements. Who knows when luck might somehow smile on you?” said Heritage Awardee Amb. Libran Cabactulan, who received a standing ovation during the event.

“When we use and harness the opportunities given to us to serve a noble goal and make a positive impact and uplift the lives of others, even in our infinitesimal ways, we become outstanding,” said Human Rights Advocacy awardee Atty. Maria Elizabeth Cueva.

From TOFA’s Lifetime Achievement awardee Dr. Restituto Estacio: “Let us keep the flame of volunteerism in our hearts and minds, and continue to open our hands to the needy, regardless of faith, race, color and creed.”

“As I receive your kind recognition, I declare my commitment to one day become a shoulder to stand on as well and a hand to hold for my fellow Filipinos, most especially other farmers’ children, yearning to breathe free from a life of hopelessness and despair,” said Resilience awardee Romnick Blanco.

“I am bolstered by the support of my Filipino community here tonight. My courage stems from my bravery to look inward, accept the faults while embracing the fear and dancing anyway because I must. It is my dream to become a principal dancer with New York City Ballet but it is also a dream achieved tonight to be acknowledged for being a tile in the greater mosaic of change happening in this society and this country,” were the choice words of Courage of Conviction awardee Georgina Pazcoguin.

“I’m receiving the Award for LGBTQ Advocacy, as an openly gay Filipino American, I’m proud that my family is here with me tonight. I’m also honored to serve as the first Filipino American director of the Mayor’s Office on Asian and Pacific Islander Affairs in Washington, DC – the largest office of its kind in the country. But my proudest honor remains the unfinished work to serve our Filipino WWII veterans, so I hope you can continue to join me to cement their role in our country with the Filipino Veterans Recognition and Education Project,” said Ben de Guzman, LGBT Advocacy awardee.

In classic Filipino style, Education awardee Ramil Buenaventura, began his acceptance speech with a pun. “Why are teachers given awards in TOFA? Because teachers have class! Hindi po biro ang maging teacher sa Amerika and yet I am just one of the thousands who adapted, thrived, and survived because we love the young people who will shape the future of this great nation,” he said. 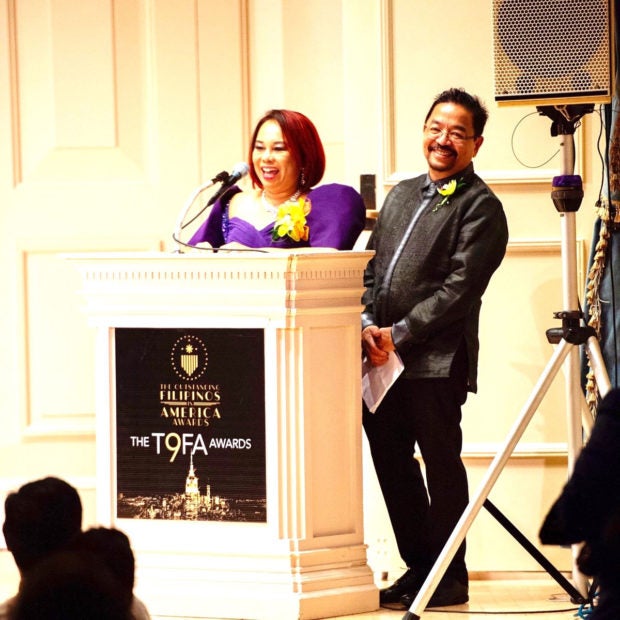 NaFFAA co-founder and chairwoman of the U.S. Pinoys for Good Governance Loida Nicolas Lewis gave a keynote speech paying tribute to the hard work and perseverance of Filipinos in America, who she said deserve the community’s honoring through TOFA. This is why she has been the staunchest supporter of the TOFA Awards since Day 1 and over the past few years, hosting TOFA after-parties. The luncheon she hosted last October 27 also celebrated Boy Abunda’s birthday, as she did last year, despite the latter’s absence.

Gil Quiñones, the highest-ranking FilAm in the Cuomo cabinet, presented a special citation from the governor during TOFA night. In his message to TOFA, N.Y. State Governor Andrew Cuomo noted that TOFA honorees are “tremendous sources of community pride.” “These stellar individuals inspire future leaders and have earned well-deserved praise from a grateful community,” he said in the TOFA message.

“Every October, we take time to reflect on and celebrate the legacies, contributions and rich heritage of Filipino Americans who have made an indelible impact in the five boroughs and beyond,” echoed NYC Mayor Bill de Blasio, who like Cuomo has supported TOFA with inspirational messages through the years.

For the second straight year, Philippine Consul General Claro Cristobal was the one who presented the plaques and tubaws to the TOFA honorees. “Events such as this display to the rest of the country that Filipino-Americans are innovative, responsible and excellent citizens of this nation. I wish to take this opportunity to commend the organizers’ continued efforts to promote events that would be a source of encouragement, inspiration and betterment for the Filipino-American community in the United States,” he said in a message to TOFA.