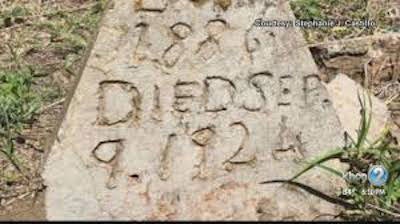 A cement marker appears to be near the site, but it only shows a date of birth and the death date of Sept. 9, 1924, without naming a person. SCREENGRAB

HANAPEPE, Hawaii — A research team on Oct. 20 believes it has found the mass grave of 16 Filipino strikers killed in what became known as the 1924 Hanapepe Massacre on Kauai.

Sixteen Filipino plantation strikers and four deputized civilians were killed in the massacre on Sept. 9, 1924.

On Sunday, a team of the Filipino American National Historical Society Hawaii State Chapter’s Kauai committee aided by a technician and an engineer found a trench at the Hanapepe Filipino Cemetery with what they described as “12 anomalies,” according to a report by West Hawaii Today.

Ground-penetrating radar equipment and a divining rod detected the ground anomalies lined parallel to one another.

The anomalies believed to contain the remains of 12 of the 16 strikers were about a foot away from a small makeshift concrete marker with no names and only dates: “Born 1886. Died Sept. 9. 1924.”

“I’m excited and anxious at the same time. The primitive and modern technologies brought closure to a big missing piece to a major tragedy in Kauai’s history and Filipino American history,” Mlke Miranda of the FANHS chapter told the news media.

Emmy-winning independent filmmaker Stephanie Castillo and an Oahu crew filmed the team’s discovery. The footage will be as part of her documentary “The Hanapepe Massacre Mystery” whose premiere is planned for 2024, on the 100th anniversary of the massacre.

“For 95 years, nobody knew where this grave was. Today we’re sure enough. We know where it is.” There are no plans to dig up the graves, some of which had been covered over by newer ones.

Research will continue through court records and Hawaii Sugar Planters’ Association records to identify each of the 16 strikers. County officials and labor unions will be asked to put up a permanent memorial for the slain strikers.

“Because of their sacrifices, a lot of Hawaii’s workers have better working conditions,” Miranda said.

The research team will present its findings in July at the Filipino American National Historical Society biennial conference in Waikiki.