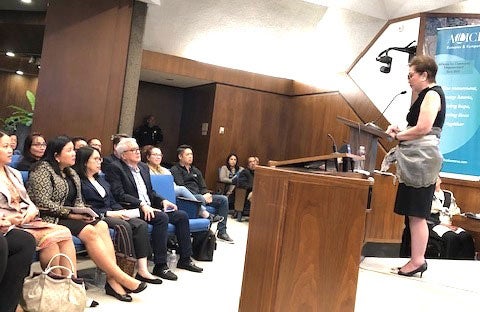 Colma Mayor and longtime Kumare Joanne del Rosario breaks her silence with her “rock” as she calls her husband, Rene Malimban, sitting across from her in the rapt audience. CHERIE QUEROL MORENO

For the first time since ALLICE Alliance for Community Empowerment was formed in 2003, the Filipino American-initiated movement to build healthy relationships and homes through education staged its yearly event at a municipality’s most respected space. 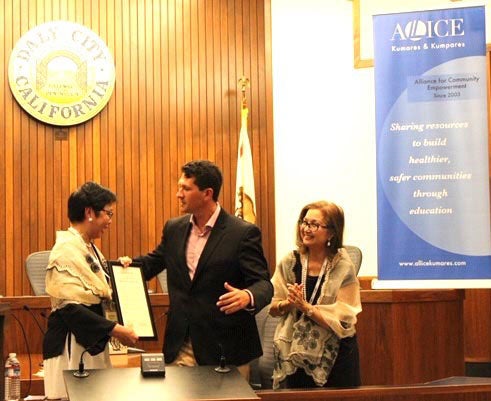 Following the all-volunteer nonprofit’s tradition of uniting the community to confront and combat the silent enemy, elected and appointed officials joined advocates and resource providers in spurring action Oct. 3, at the chambers of the City Council composed of four Fil-Ams out of five members. 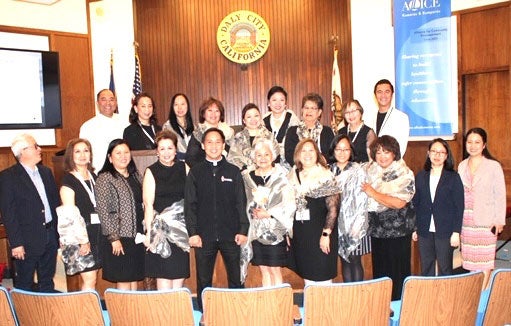 In his keynote, San Mateo County Supervisor and former Daly City Mayor David Canepa emphasized the “need for every sector of the community to come together to prevent another incidence of intimate partner abuse.”  He punctuated his remarks by recognizing ALLICE founding president Bettina Santos Yap for 16 years of advocating for healthy interaction.

Santos Yap, a former IT marketing manager-turned-pastry chef, designs all of the team’s outreach tools and directs the dramatization of unhealthy interaction and healthy alternatives for their annual spring elder care and abuse prevention.

Since 2004, she has never missed an ALLICE event.  When she received a call moments before the starting the 2008 program at the War Memorial Center in Daly City that her father had been rushed to the hospital in Manila, she opted to remain at her post with her husband and fellow volunteer Voltaire Yap while waiting for updates.  Minutes later when another call delivered the dreaded news that she had lost her father, she chose to stay at the presentation, pouring her grief into her advocacy to honor him. 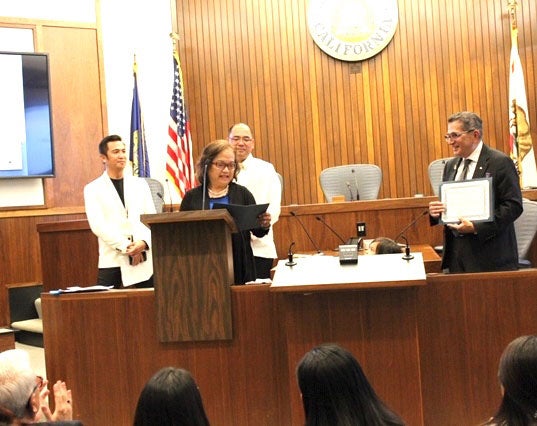 Mater Dolorosa Legion of Mary and Knights of Columbus members Lydia and Ed Pomposo pledge to support ALLICE through their personal and church ministry.  EDD PALOMAR

“Bettina sets the bar high for being a Kumare,” ALLICE founder Cherie Querol Moreno praised her confidante and collaborator.  “Her dedication energizes all of us and assures us that together we can achieve everything we aspire to.”

The ALLICE executive director also hailed Colma Mayor and longtime ALLICE Kumare Joanne del Rosario, who shared her story of survival from a challenging 13-year relationship that brought out her inner strength, courage and resiliency.

“Joanne is extremely private, but to give hope to others in similar situations, she opened up about her experience.  Her testimony depicts what intimate partner abuse looks like.  On one hand, it’s about uncertainty, fear and shame.  On the other hand – as was in her case – it summoned her inner strength, resiliency, and faith.”

Del Rosario was unaware of the dynamics of abuse and questioned herself, believing her then-partner’s constant put-downs.  Loyal to her wedding vows, she stayed, thinking he would change if she met his expectations.  She did not realize that people who abuse act out of a sense of entitlement.  Whatever effort she made to save the relationship was never good enough.  She tried to leave once only to return to him after he apologized.  She might have stayed had not a neighbor who was in law enforcement and mandated to report suspicious incidences convinced her that her and her infant son’s lives were at risk due to her husband’s behavior. 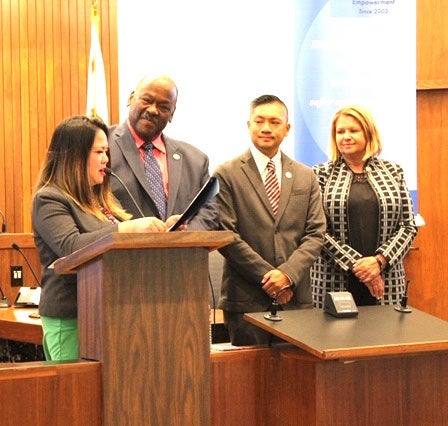 The four Fil-Am member City Council of Daly City commends the Kumares and Kumpares for raising awareness of an issue once considered private especially among Filipinos and resources to help those in troubled relationships. EDD PALOMAR

“I felt safe because my parents gave me refuge without judgment,” Del Rosario said in her testimony to the power of unconditional love that ultimately brings healing.