Crying and laughing at the familiar with Bindlestiff’s ‘Tagalog 2019’ 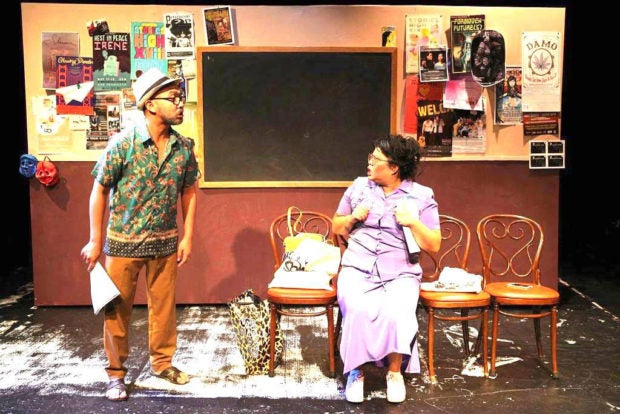 Bryan Palac as Peds and Nic Feliciano as Tisha in “Ensayo / Rehearsal” written by Juan Ekis and directed by Joe Cascasan. ROB SUGUITAN

SAN FRANCISCO – Seeing plays told in a language you are familiar with or fluent in adds a deeper level of appreciation — the experiences depicted could very well be your own. To those unfamiliar with the language, the storytelling adds a layer of authenticity and authority, with nuance, sensibility, and depth that the English supertitles could only allude to.

“A collection of one-act plays written and performed in the national language of the Philippines,” Tagalog 2019 is a Bindlestiff Studio main stage production by Joyce Juan Manalo and Lorna Velasco in partnership with writer and actor Rody Vera and the writers of the Virgin Labfest in the Philippines.

The producers, directors, and cast, a mix of immigrant and American-born Filipinos, do justice to the renditions of the plays and delivery of the language, giving this production the cultural depth and overtone that it deserves. It is a collection of plays that are socially conscious as well as entertaining.

Ang Mga Bata sa Selda 43 / The Kids in Cell 43, written by Rolin Cadallo Obina and directed by A. Samson Manalo, is a sharp critique of the consequences of the war on drugs by the Duterte administration in the Philippines. Yet, it does not point and wag its fingers directly at the perpetrators of injustice. Rather it shows the injustice through the experiences of the victims, the majority of them poor and many are children. 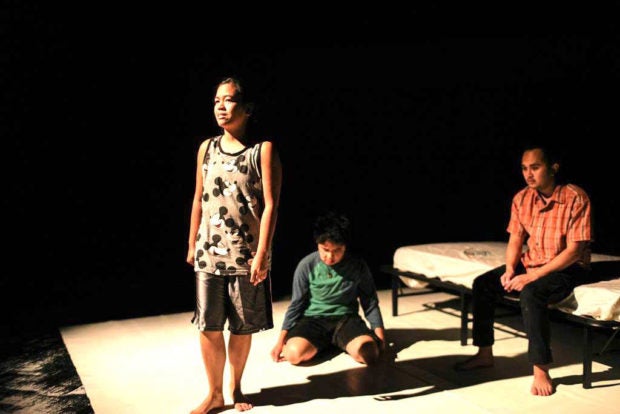 This does not become clear until the end as the play begins with its characters caught in a strange and mysterious circumstance. Two children are trying to figure out where they are and how they ended up confined in a small room with a bed. The audience shares the characters’ confusion and anxiety of the characters; this gives the play its edge and makes it more experiential.

The characters endear themselves to the audience through humor in spite of their circumstance, making the play’s ending even more heartbreaking. Struck with boredom, confusion, and hunger they long for their mother and try to escape and manifest their wishes through their imagination. But their ability to dream about better realities is in vain. A man appears out of nowhere to slowly reveal the truth about where they are.

He shares his own parallel history about being a student activist during the Marcos regime and how this had brought him to where he is. It brings to mind all the lessons that we have not learned from a history shrouded with amnesia.

With allusions to an alien abduction and a trio of characters seemingly confined in a nondescript space, where traces of voices are heard amid intermittent emergency flashings of a red light, it could be an episode straight out of the Twilight Zone. At its core, however, Ang Mga Bata sa Selda 43 / The Kids in Cell 43 is about innocence and childhood taken away from victims of an unjust system and an unmanageable anti-drug campaign. 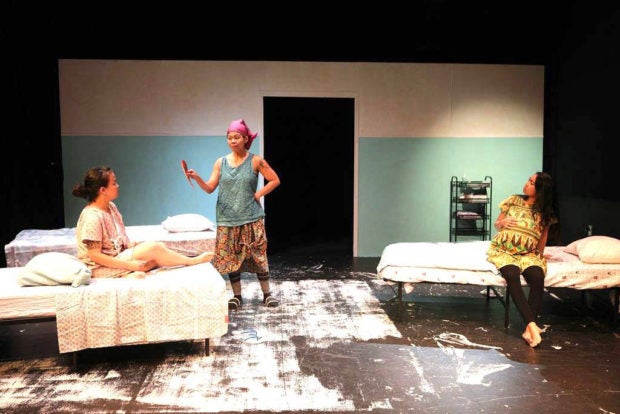 The play builds up to a harrowing climax and offers a lot to ponder about the current situation in the Philippines and all the unseen innocent lives that are affected.

Labor Room, written by Ma. Cecilia Culvera de la Rosa and directed by Aureen Almario with assistant director, Laura Priscila Paule, lays bare the plight of pregnant women in the Philippines. Inspired by the playwright’s experience of giving birth in a government hospital, Labor Room brings to light the reality of public health care in the Philippines and its severe lack of facilities and providers.

The story unfolds around three main characters who can be seen as archetypes of a Filipina. The character called Nay, is an older woman who has been there, done that, and back, resilient and wizened by experience who offers hope, reassurance, and advice.

The character called Ate, is a woman who has been around the block, who has lost what she wanted and could not seem to get what she wants. Ate has had a miscarriage and is in the labor room to have her uterus scraped. She is anxious and afraid that the process might prevent her from getting pregnant again. She has a traditional and more conservative point of view and questions abortion as a choice.

The character called Veh, is a slightly naïve young woman with a more liberal outlook and practical sensibility. She could see having an abortion as a choice between raising a child in poverty or sparing a child from a life of squalor.

The play illustrates the warm camaraderie of the women in the labor room. It’s a mix of drama and satirical comedy. Nay reassures and gives hope to the women, telling Ate to just keep on trying. To Veh, who is about to give birth, Nay recalls an oldwives’ tale about the multiplication of a mother’s areolas into four if she laughs when tickled by the nursing mouth of her child. Nay says the last line, “Huwag kang tatawa! (Don’t you laugh!) less as a warning than a joke and provocation to laugh at one’s troubles.

Ensayo / Rehearsal turns romantic comedy on its head by having an old bachelor and a grandmother as its protagonists. Both are aspiring theater actors rehearsing a romantic scene that they are about to perform, making the play inherently and delightfully meta.

Written by Juan Ekis and directed by Joe Cascasan, it is a feel-good comedy about self-reinvention and second chances: it is never too late to fulfill one’s ambitions, and finding love can happen at any age. Hilarious with romantic sentiments that are, for a lack of a better term, quite Filipino, Ensayo / Rehearsal instills hope in the future with all the unexpected good things that no one knows could happen. It’s the ideal ending piece that will leave a smile on your face.

Tagalog 2019 is a must-see if for no other reason than being the only production of its kind in the San Francisco Bay Area. Its merits go beyond novelty, as it is a collection of outstanding plays imported from the Philippines with nuances, sensibilities, and flavors intact.

Its relevance is unquestionable. Tragic, sad, funny, and irreverent it offers a glimpse and insight into the current sociopolitical situation in the Philippines that is a contrast to Filipino American life.

A common thread between the three plays is the fact that, in spite of all the struggles, Filipinos can laugh in the face of adversity—a key to our strength and resilience. Steeped in the plays’ tragedy and sadness, joys, triumphs, and laughter, informed by your own personal circumstances, you reel from nostalgia for the Philippines you grew up in. Or you’re made to be nostalgic about the Philippines you barely know, so that stepping out of the theater after the show could feel, for a moment, like you were on a street somewhere in Manila.