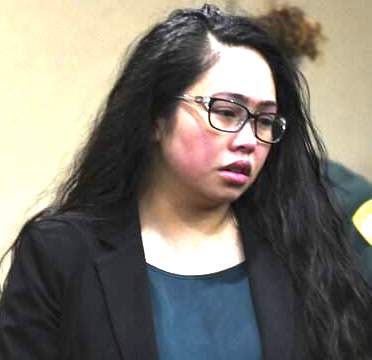 A mistrial was declared as a jury failed to reach a verdict on Katherine Magbanua’s role in the contract killing of a Florida professor. Prosecutors are planning for her retrial. AP PHOTO

TALLAHASSEE, Florida — A jury found a Florida man guilty of first-degree murder Oct. 11 but deadlocked on a Filipina second defendant in the 2014 killing of a Florida State University law professor whose contentious child custody battle framed the two-week courtroom drama.

Prosecutors welcomed the murder conviction against Sigfredo Garcia, but it wasn’t clear immediately afterward if they would retry their case against Katherine Magbanua, who prosecutors said helped carry out the slaying of professor Dan Markel five years ago.

Some of Markel’s family bowed their heads as the jury streamed back into the courtroom and delivered its verdicts. Some jurors appeared emotional as they watched Magbanua break down in tears as the jury handed down its guilty verdict against Garcia, the father of her two children, and asked for more time to decide her fate. Magbanua remains in detention.

They returned not long after to report that they were deadlocked. All 12 jurors are required to agree on a verdict to convict a defendant.

Prosecutors asserted that Magbanua, Garcia and another man were hired to kill Markel. While the jury also found Garcia guilty of conspiracy to commit murder, it declined to convict Garcia on a solicitation charge.

The second man, Luis Rivera, is already serving seven years in prison for second-degree murder after reaching a plea deal to testify against Magbanua and Garcia, his childhood friend.

A sentencing hearing on Garcia’s murder conviction begins Monday at the Leon County Courthouse in Florida’s capital. He could face the death penalty.

“We have a penalty phase coming up early next week. They did find him not guilty of the solicitation, which means they didn’t think he did it for money,” said Garcia’s attorney, Saam Zangeneh.

“The only thing I can think of is that they thought my client committed this murder out of his love for Magbanua,” he said. “If he’s not doing it for money, he’s doing it for love.”

After his verdict was read, Garcia was overheard by a Tallahassee Democrat reporter telling Magbanua, “I love you, Katie.”

The verdicts handed down Friday muddle not only the case against Magbanua — if retried — but also any charges that could be brought against additional people of interest in the case, especially the financiers behind the murder-for-hire scheme prosecutors have alleged throughout the court proceedings.

While Magbanua took the stand in her own defense during the trial, Garcia declined.

His lawyers said they will consider their options Sigfredo Garcia was convicted of murder and faces the death penalty. Katherine Magbanua may be retried. AP PHOTO

“If there’s ever a time for Mr. Garcia to cooperate, it would be now, but that’s obviously a decision he’ll have to make,” Zangeneh said in an interview later Friday.

Assistant State Attorney Georgia Cappleman made her theory clear during court proceedings — even after Garcia’s verdicts were delivered — that the family of Markel’s former wife, Wendi Adelson, had a role in his execution-style killing, even if no charges have been filed.

Prosecutors said Magbanua, who was romantically involved with Markel’s former brother-in-law, Charlie Adelson, was the link between the hit men and Markel’s in-laws.

Markel was shot twice in the head in the garage of his Tallahassee home while talking on the phone in his car, after dropping of his children at day care and spending time at the gym.

A neighbor found Markel and saw a light-colored Prius speeding away. The car was later traced to Rivera. Further investigation led authorities to Garcia and Magbanua.

As their inquiry widened, authorities also began looking into the role of Markel’s in-laws.

During the trial, prosecutors alleged that Rivera, Garcia and Magbanua were working on behalf of financiers who prosecutors spent $100,000 to see Markel dead.

During opening statements, Cappleman said Markel had sought to keep his mother-in-law, Donna Adelson, from having unsupervised visits with his children because she had spoken disparagingly about him.

Wendi Adelson had said her brother Charlie had joked about hiring a hit man as a divorce present but had decided instead to buy her a television.