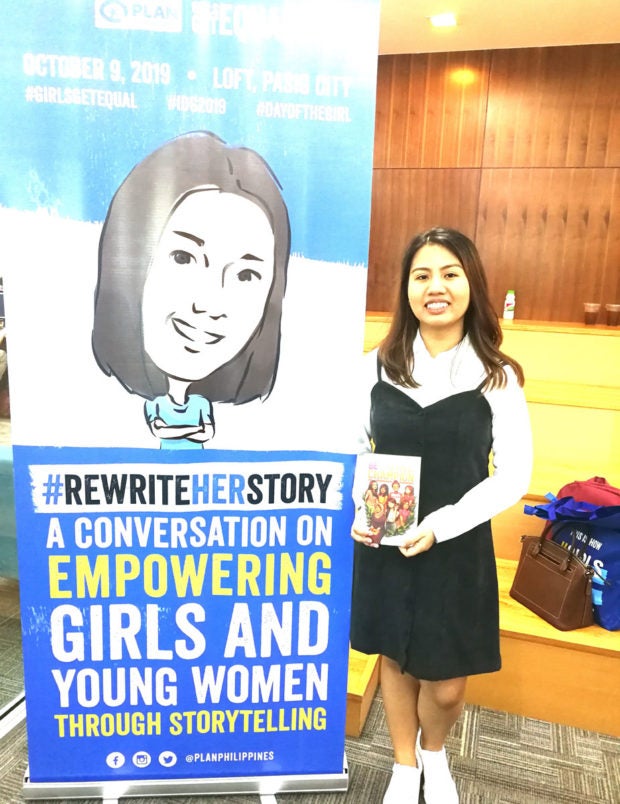 Child marriage, inequality, sexual exploitation, trafficking, rape – in the eyes of a girl, these are not just words, but issues that can confront her every day. Stories on these topics have appeared in news and documentaries, but they are seldom discussed in classrooms for lack of age-appropriate materials that are easy to read.

Who could write a book about girl victims and survivors of such ordeals? Of course, another teenager, whose life has been dedicated to raising self-awareness among youths.

Chloe Saraspe Reynaldo, a 19-year-old, second year Biology student at the University of the Philippines was tapped to write and illustrate the stories of seven girls from Cambodia, Indonesia, Laos, the Philippines, Singapore, Thailand, and Vietnam.

The three-year book project entitled Be a Girl Champion’was funded by Discovering Global Citizenship Global Innovator Prize and published by the Texas Christian University (TCU) Press. It was launched at Rees-Jones Lobby of TCU on October 8.

The soft launching in the Philippines was held on October 9 at Loft Co-working Philippines in Manila during the #ReWriterHerSTory: A Conversation on Empowering Girls and Young Women Through Storytelling event of Plan International Philippines. It was also a part of the celebration of the United Nation’s International Day of the Girl on October 11.

According to the publisher, “the book is a compilation of 7 stories about 7 girls in Southeast Asia who faced hardships in their lives but who came out stronger and wiser. The book celebrates the advocacy, gender equity, and the power of girls.”

If Greta Thunberg speaks for the environment, Chloe Reynaldo speaks for the youth.  Her activism started early. No, it did not include walking out of the classroom or sitting outside with a placard. Yes, she missed her classes to speak about adolescent sexuality and issues confronting girls in various forums around the world. Cover of Be a Girl Champion (Texas Christian University)

Chloe’s activism started when she attended a Youth Health Summit sponsored by Provincial Population and Gender Office of Aklan, Philippines as a representative of Science High School where she was in Grade 9. From then on, she attended a series of training and started speaking at high schools on adolescent sexuality. She became the youngest delegate and speaker at the UN Women’s Summit in Bangkok in 2016 as well as at the first World Humanitarian Summit in Istanbul also in 2016.

Her activism also led to her becoming the first Filipina and the youngest to be chosen for the 2016 Global Innovator Awards by TCU.

Chloe says being a girl propels her activism because girls are the most vulnerable people in the world.

Being a storyteller and illustrator is nothing new to Chloe, who started writing at the age of four. Her talent in drawing also showed early. So, it was not surprising that she became an author and illustrator.

Chloe says her creative inspiration came from the styles of books or documentaries she has read or watched.

“I wanted to write the stories as simply as I could and show them for what they were. I wanted people who read the stories to become aware of these issues. The fact that these girls were in such circumstances were shocking enough,” Chloe explains.

Chloe started the first draft of the story in September 2016. She first wrote the story of “Carla,” the girl from the Philippines. It was followed by stories of six other girls experiencing hardships but all overcoming the struggles and becoming stronger and wiser.

But the story of Carla was closest to her.

“Carla is the only story based directly on someone that I’ve met in real life. Working on her chapter was very personal, not only because I’ve met her, but because she was around the same age as me, and I had also gone through the horrors of Typhoon Frank in 2008, when it hit our province (Aklan). In that way, I could imagine her experience more vividly, and it kind of established a connection between us,” Chloe explains.

In terms of values and personality, Chloe says that she also identifies with “Valerie.”  “Valerie is someone very academically oriented and focused on her goals.”

Categorized as juvenile non-fiction, the names of the characters have been changed for security and privacy reasons, but the book depicts problems girls in Southeast Asia are experiencing every day in schools, societies, and within their families. “The biggest challenge was keeping it respectful – culturally and tonally. Again, my intention with the book was to improve representation and awareness of these problems. Since I was writing about girls from other countries, I had to be careful with how I was presenting them and their situation,” Chloe explains.

‘Look out for one another’

Chloe may be busy with her studies, but she will continue writing and illustrating stories. Her book is not only for young people but for everyone.

Melinda Esco, the production manager of TCU Press, believes that the book will contribute to the global conversation about women’s rights and their struggles to attain fundamental human rights.

“It will truly champion young women throughout the world who may find themselves in the stories that Chloe presents in her book,” Esco said.

At Rosemont Middle School in Texas, English teacher “Ms. Tonda” uses Be A Girl Champion as a daily read aloud exercise for global awareness and inspiring personal reflection in her classes.

Chloe’s message is to “look out for one another” in any circumstances.

“It’s a tough world, especially for women and girls, so it stands to reason that all of us should try and help one another and to lighten the load. We’re all people from different circumstances and different backgrounds, with different things we can contribute. If you’re in a situation where you can do something, where you can make an impact, you should take that chance.”

Chloe has already made an impact, and she will definitely continue her advocacy.

Be a Girl Champion by Chloe Saraspe Reynaldo is available on Amazon and at TCU Press. Find out more at https://www.instagram.com/beagirlchampion2020/