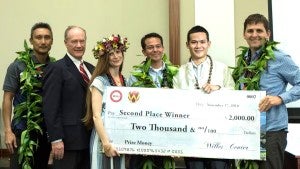 But this young man’s dream to become a productive citizen was almost cut short because of poverty and dirty politics in the Philippines. Ironically, these reasons also brought him to Hawaii.

“It is designed to create a direct access from the farmers to the local markets and local consumers without the intervention of the middlemen,” Elvin explains. “One of our goals is to design a mobile application wherein farmers can sell their produce in a specified geographical location, basically in their local communities.”

Elvin’s firsthand experiences with the difficulties farmers face made him develop the application. RiceUp (can also mean Rise Up from poverty) is a social enterprise created to connect farmers directly to local market and consumers that will lead to fair market competition and build a strong farmer-consumer relationship.

The app also encourages cooperatives to serve as production hubs in each village. Empowering the farmers through increased productivity and self-sufficiency will decrease poverty. 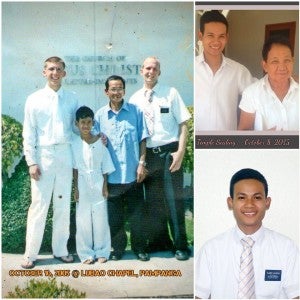 He also explains that the app could increase farmer’s productivity, from an average income of $88.00 a month to $250.00 net income a month. The popularity of social networking sites and affordable Internet in the Philippines make this app viable.

In the early stage of the project, Elvin was alone. But in the succeeding rounds he sought the help of other students, mostly Filipinos; thus they become a team. Among them were Princess Donato from Isabela, Philippines and James Astle from California; they helped him in video editing and some technical aspects of the project.

In January 2017, the RiceUp will be launched in Lubao, Pampanga in partnership with the local Latter Day Saints Church working with the farmer cooperatives and Enactus, an international non-profit organization. The team plans to partner with the Department of Agriculture and the local government. They also need volunteers from the area.

Elvin says that he wants young people to be “thrilled” to be involved in agriculture, thus producing a new generation of Filipino farmers.

Elvin has come quite far from the fishing and farming community in Lubao, Pampanga where he grew up. Coming from a broken family, he was raised by his maternal grandparents. His grandfather was a fisherman and a farmer while his grandmother is a market vendor.

Witnessing the daily sacrifices of his grandparents he set his goal – to study in a university. The demise of his grandfather in 2007 made him more determined to study, so he applied for various scholarships but all failed. Still he kept his faith.

“I personally talked to Rep. Gloria M. Arroyo about my situation. I never expected that she would listen to me. Mrs. Arroyo recommended me to the Department of Agriculture. Then I was admitted to Bataan Peninsula State University-Abucay to study agricultural engineering,” Elvin recalls.

Elvin thought that it was the realization of his dreams to lift his family from poverty. When he was in his second year, he learned that DA-ACEF did not pay his tuition fees and his scholarship was forfeited for unknown reasons. He stopped school in 2013 and became a missionary of the Church of Latter Day Saints. He served in Northern Mindanao.

“I consider that a pivotal time in my life. I did not only learn spiritual things, I also witnessed the complicated problems in agriculture – not only rice farming, but also other crops. This inspired me to develop the RiceUp,” Elvin says.

Elvin submitted an application to BYU in June 2015, but he was rejected. With only a 29 percent approval rate among applicants he was lucky to be given another chance. He resubmitted on March 2016 and was approved through the I-Work program of BYU. 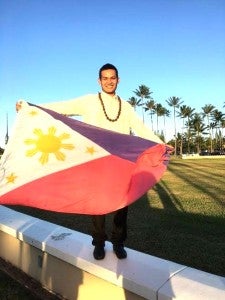 Elvin Laceda intends to go back to the Philippines to serve his country. CONTRIBUTED

His interview at the US Embassy was a breeze. After three days Elvin got his student visa. On July 25, he arrived in Laie, Hawaii.

Hawaii is a multicultural State. Elvin does not experience discrimination. His aunt’s mother-in-law, Verna Takushi, helped him in adjusting and provided assistance when he arrived. There is also a Filipino Club in the university, which helps students make a smooth integration at BYU.

Students also have an option to work at the nearby Polynesian Cultural Center, where BYU has a tie up.

Elvin expects to graduate in May 2018. Afterwards, he plans to do an internship at the UN Food and Agriculture Organization to learn more about the industry and how the system works. But one thing is sure: He will go home and serve his homeland.

“I know I was born to live, to serve and to die in the Philippines. I am delighted, contented and privileged for the blessings I enjoy because of my Filipino citizenship. My country needs me. Although, our country is smaller in terms of economy and technological advances, people like us, who have been blessed by good educational opportunities and skills should give back to our motherland and serve,” Elvin declares.

To the young people from broken homes he has this to say:

“Be thankful for all the opportunities. You have a choice, rewrite your history, you can achieve your dream, just believe and work hard for it. There is no harm in trying again if you fail.”