Hotdog Band rocks expats on its ‘Manila Sound US Tour ’17’

SAN LEANDRO, California — Once more, the band that pioneered the Manila Sound of the 1970s in the Philippines wove its old magic and rocked Sacramento, San Leandro and Los Angeles in its Legendary Manila Sound Hotdog U.S. Tour 2017 on May 12, 13 and 20 respectively, and Filipinos across the generations danced and sang to familiar tunes.

Yes, the Hotdog Band of the Garcia brothers, Rene and Dennis (now retired) with its present-day members entertained avid followers from as young as ten to as old as 75. 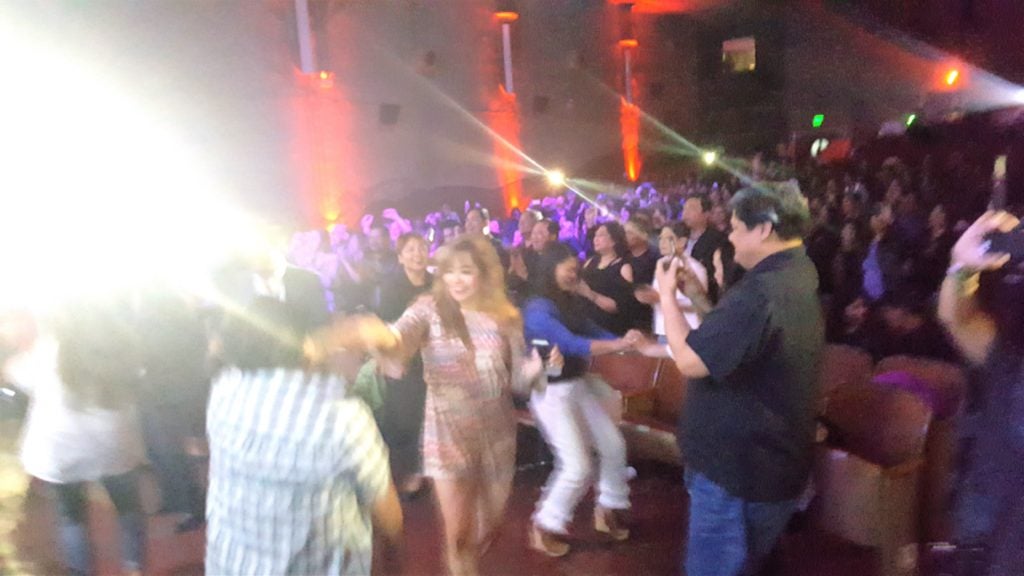 The crowd at Bal Theater in San Leandro whoops it up to the songs of the Hotdog. INQUIRER/Jun Nucum

In an interview, Rene recalls that it has been 40 years since he and brother, Dennis, started the band with some friends.

“We had a reunion concert last December and now we are doing the U.S. leg of the tour of the present-day Hotdog,” Rene shares. “Before it became the ‘70s Hotdog band, we had the RedFox. RedFox being a dog, Hotdog actually is the dog that is hot. We just adopted the name Hotdog.”

He admits they may be the most enduring band in the Philippines and assures loyal fans that they will keep rocking, “as long as we can, as long as I can stand, I will be playing for all the Filipinos.”

Rene says that leaders and members of the other bands including VST and Co., Boyfriends, Cinderella, Circus Band, Wadab, Donuts, Popcorn, Hagibis, among others– bands during the golden years of the Manila Sound that eventually morphed into Original Pilipino Music (OPM)–are actually close and good friends.

“What was thought of as heated competition among the OPM bands was really just for fun and not really bad or destructive competition, but a healthy one. This was part of the gimmick of the record companies’ producers. We are all good friends,” Rene chuckles. 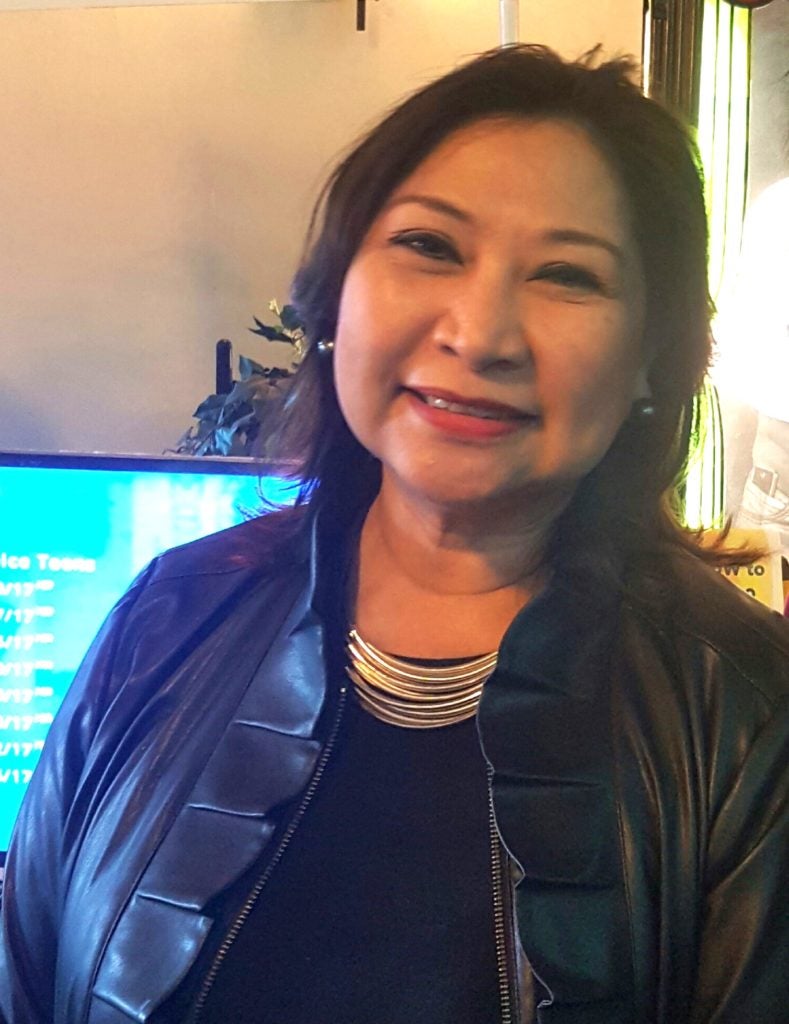 OPM singer-composer Cecile Azarcon of Vallejo, California grew up with the music of the Hotdog. INQUIRER/Jun Nucum

“Even our hit song ‘Meow,’ which was widely known as a song critical of bands sounding like cats singing much like the Bee Gees during their prime in the late ‘70s disco scene, was actually for promotional purposes for VST and Boyfriends. We had to think of a parody to entice the people to watch us. Nowhere was there cut-throat competition. It was just our gimmick.”

In the band’s concerts for Filipinos around the world, VST & Co’s Rock Baby Rock and Awitin Mo at Isasayaw Ko, Boyfriend’s Sumayaw Sumunod and Bakit Labis Kitang Mahal, Sampaguita’s Bonggahan, Hagibis’ Katawan (countered by Charing’s BADAF Forever, and Maria Consuelo’s Superstar, among others are part of its repertoire. Audiences cheer it on with every song. This is Hotdog’s way of paying tribute to its “competitors” own contributions to the golden age of OPM,

Rene’s brother, Dennis, in an earlier interview, stated that he was not surprised at all their songs have endured. He cited Ikaw ang Miss Universe ng Buhay Ko, which was done when the Miss Universe was held in the Philippines in 1974, and Bongga Ka Day which was a hit during the disco heyday also in ‘70s.

“All our songs were based on universal human emotions and those feelings never go out of style. We’ve made it a point to write songs with real insights and not just words stitched together like “I love you… the sky is blue…,” Dennis explained. The Mother of all Hotdog songs, Manila, became known as the “national” anthem of all Filipinos abroad.

“Rene and I were enamored with the song I Left My Heart in San Francisco and felt our favorite city should also have an anthem of its own, a tune that will last forever. Looks like we got ourselves a self-fulfilling wish,” Dennis declared

And looking at the roster of the band’s former female vocalists, Dennis took pride that Hotdog had “the most talented and prettiest singers.”

“They discovered me when I was at a commissary adjacent to the Hotdog band studio, but I didn’t know they were there. Rene Garcia then went out and was told by manager goes,”You know what? This girl can sing. So I went in their studio and they asked me and I sang for them Chandelier, which was my audition piece for them. I didn’t know that they were on the lookout for a female vocalist,” narrates Poblete.

“As a new member, It feels overwhelming every time I go onstage with and sing the songs of the Hotdog. I am really proud to be with them, but at the same time it is very humbling experience for me being with a legendary band.” 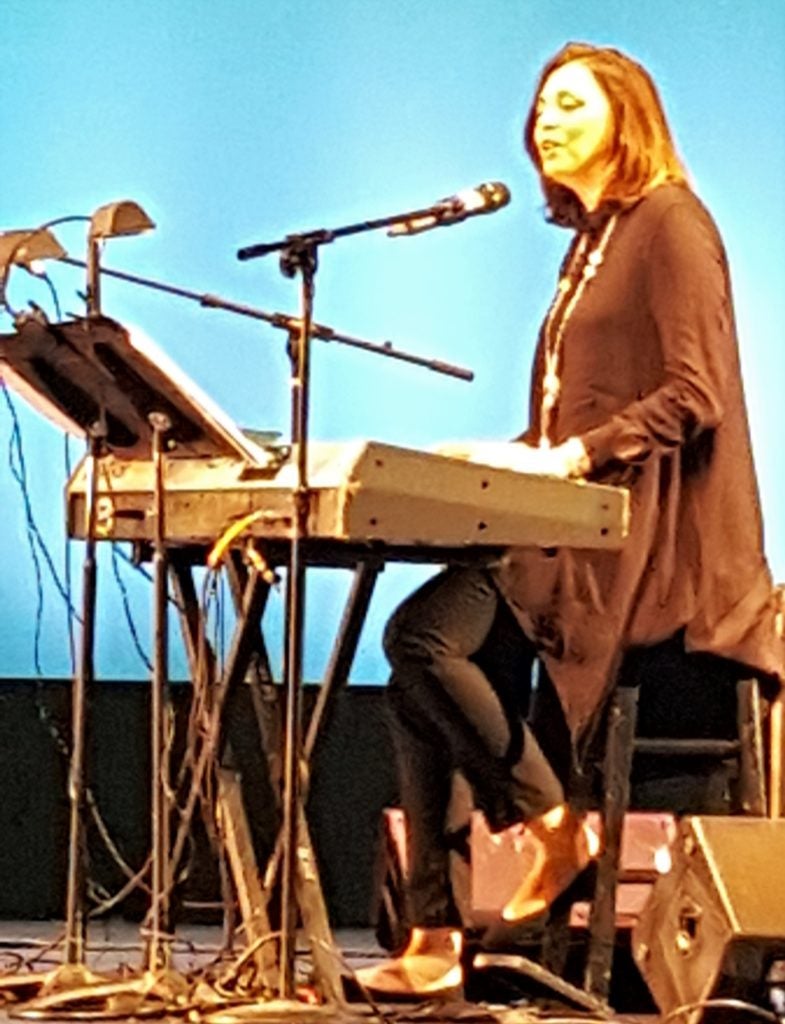 Former band member Odette Quesada, herself an accomplished multi-awardedOPM singer-composer, urged the Garcia brothers to write a book on how to write hit songs. INQUIRER/Jun Nucum

One of those very talented and pretty female members is multi-awarded, prolific OPM singer-songwriter Odette Quesada, who is now based in Los Angeles. Her immortal songs included Friend of Mine, Growing Up (by Gary Valenciano), To Love Again (by Sharon Cuneta) Till I Met You (by Kuh Ledesma),  Don’t Know What to Do, Don’t Know what to Say and Give Me a Chance (by Ric Segretto), I Need You Back (Raymond Lauchengco).

“I was part of Hotdog, if I’m not mistaken, around 1989. We met working in the same studio doing commercial jingles. They asked if I wanted to be part of an album they were doing…I said, hell yeah. I worked on an album with them called 100% PURE BEEF I think that was the name of the album. I had fun collaborating with Rene and the rest of the band at the time. I mostly worked on the album with their keyboardist Dennis Mercado. I enjoyed the recording sessions we had. The mood was always pretty light. We joked around a lot,” Quesada recalled. “I was never a part of a band until I worked with them. It made me feel like I was part of a unit. Not sure if their skills rubbed off on me or vice versa. But my short stay with them was truly memorable to say the least.”

On what makes Hotdog last four decades, Quesada was quick to say that it has got to be their songs as the songwriting skills of the Garcia brothers definitely impacted the Filipino music industry.

Quesada characterizes Hotdogs songs as catchy three-minute jingles and would certainly recommend to aspiring music composers a book “HOW TO WRITE A HIT SONG” that the Garcia brothers may want to come up with.

Among the songs that the Hotdog band popularized, Azarcon admits that the song “Manila” made an imprint on her like many other Filipinos living or working abroad.

“I love the song ‘Manila’ that makes everyone homesick every time it is heard. That makes me want to come home to Manila, to the Philippines. The lyrics are also very meaningful. Like I keep saying, I am one of those who grew up with the music of the Hotdog,” bared Azarcon, who was interviewed in the San Leandro Hotdog concert where she urged Filipinos all over to keep patronizing their own OPM. 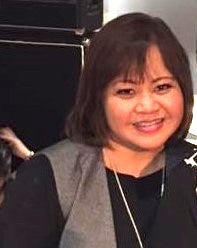 Suzanne Sabangan, lead vocalist of popular Sounds of Manila band based in New Jersey, opened for the Hotdog band in their 2009 in New York, INQUIRER/Jun Nucum

“I love the songs, the music of the Hotdog that we grew up with. I think it is wonderful that they and their songs are still there and still being appreciated by the present generation.  Our OPM songs are truly really very good and beautiful.”

Suzanne Lansangan-Sabangan, lead vocalist of popular Sounds of Manila band based in New Jersey and who also opened for the band in 2009, considers the songs themselves as the secret formula for the Hotdog to last for 40 years.

“The songs were very creative and reflected the culture during the time they were written. I think they’re innovators of OPM. For instance, Annie Batungbakal came out during the time disco songs top hits. And then Beh Buti Nga during the Punk Rock era. They also fused their music with the pop culture,” Lansangan says

The band promised to be back to sing their hits, but until then their fans would be left with their songs still ringing in their ears…

Take me back in your arms Manila