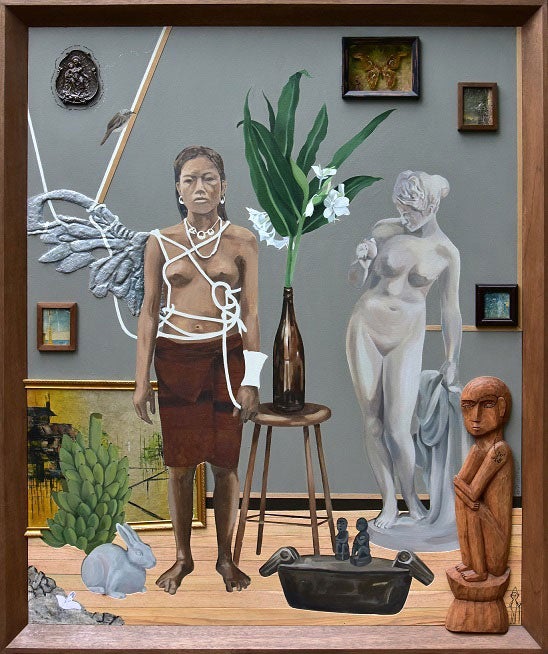 NEW YORK — “Under the Bells,” an exhibition of works by three contemporary Filipino artists on faith, religion, and spirituality — powerful forces in the Philippines — will be on view at Pintô International in East Village until February 29 next year.

The exhibition, curated by Pintô International Director Luca Parolari, brings together the works of artists Cian Dayrit, Kawayan de Guia, and Nona Garcia to demonstrate not only how the country’s Catholic history is a fruitful subject matter for artists (be it from a position of critique or careful analysis), but also how this history and its iconography become indigenized, adapted, and filtered.

The works of Dayrit, de Guia, and Garcia confront the paradoxes inherent in religion, calling into question the purity of singular religious identity. The exhibition’s title refers to how the lives of Filipinos have been organized around religion. For 400 years, Filipinos have lived “debajo de las campanas” (under the bells) of the church. As the Spanish colonized the archipelago, they consolidated dispersed inhabitants into pueblos with the church at the center of town life. Church bells would dictate the day’s events and summon villagers to worship.

The parish priest often wielded dominant power in the pueblo, and so Filipinos have lived “under the bells” of Catholicism, figuratively and literally. As the works of Dayrit, de Guia, and Garcia demonstrate, religion often becomes uniquely hybridized “under the bells” as Catholicism blends with pre-Hispanic traditions of spirituality.

Cian Dayrit’s textile works engage with faith-based symbols to analyze the images, objects, and institutions that dictate what power “is.” In his works, created especially for this exhibition, Dayrit monumentalizes the anting-anting (amulet), often pendants or inscribed handkerchiefs believed to protect the carrier from harm. Dayrit embroiders his works with an imagined iconography and Latin words, creating a constructed sense of mysticism and spirituality.

Kawayan de Guia’s surreal, tableaux-like paintings emerge as “portraits” of indigenous figures in museological settings. De Guia is based in the Cordillera mountain range north of Manila, and his paintings deal with the changing nature of this region in the face of modernization and development, as well as the region’s spirituality. The figures are surrounded by Van Gogh paintings, globes, and “bulols,” carved pre-Hispanic representations of spirits or ancestors. De Guia’s works consider the fallout when ancestral spirits collide with Western culture. 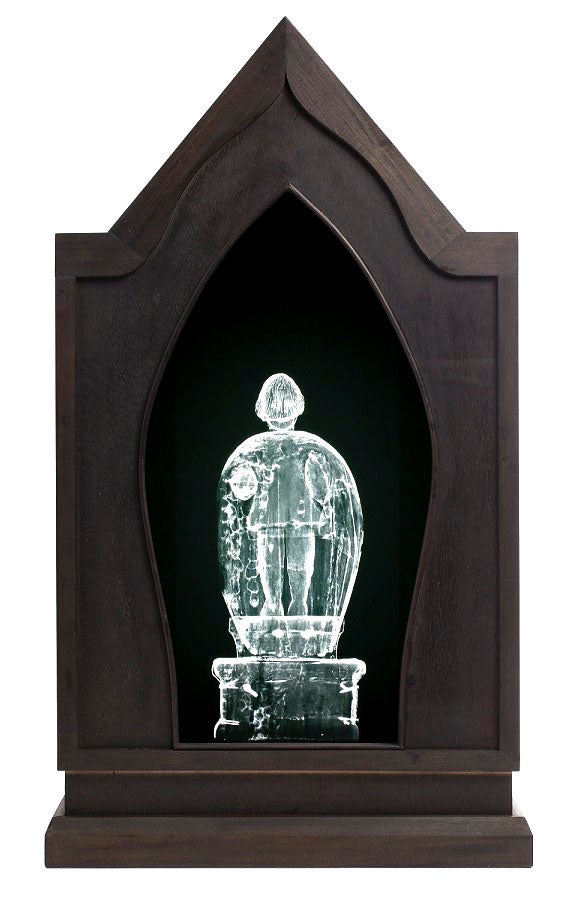 Nona Garcia’s haunting light boxes are the latest iteration of her ongoing X-rays of statues of saints. Catholic families frequently place saintly icons in their homes, which offer the devoted paths to spiritual and physical healing. Garcia seeks to reveal the materiality of the statues, while bestowing on them a sense of otherworldly presence. She channels the traditions of the Cordilleras into her surroundings and takes an objective look beneath the surface of venerated objects.

Pintô International is the New York-based overseer of the global exhibitions and programming of the Pintô Art Museum in the Philippines. Directed by Luca Parolari, the organization supports the careers of pioneering regional contemporary artists and fosters global connoisseurship for their distinct artistic practices. Pintô International presents quarterly exhibitions, an artist residency program and a monthly Pintô Sessions series at its East Village location.

Dr. Joven Cuanang, Pintô founder and president, states: “For over three decades, it has been my unwavering vocation to undertake the promotion and support of contemporary Philippine art in my home in Manila. As Pintô builds its global constituency, we are looking to New York’s uniquely cosmopolitan, progressive arts community to join us in building a dialogue around a platform for the contribution of living Filipino artists.